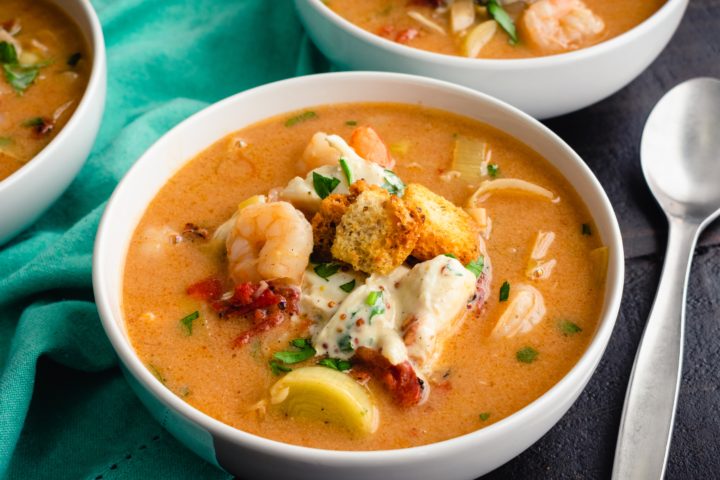 Tried soup, enjoyed bisque, so what’s the big difference? In a comparison of bisque vs soup, the differences are usually small. That said, it’s not all technicalities and hair-splitting, there are some ways that these two are different – even if they’re all too similar!

With so many different types of soups and bisques available, there is considerable overlap between the two. The differences mainly exist in the method of preparation.

Bisque almost always utilizes cream early in the process to give it that rich thickness and texture. Soups might choose to go with other ingredients like starch or flours to get a thicker texture.

Let’s get a closer look for more details and differences between soup and bisque.

Soup vs Bisque – The Differences And Similarities

The Difference And The Relation Between Soup And Bisque

Let’s start with a clarification to get things moving. Bisque is a type of soup.

Soup represents a rather wide variety of foods. Under its umbrella, stand some items like bisque, chowder, gruel, and more.

Yet, there are some defining characteristics of what makes a bisque, which is why we can differentiate it from a conventional soup. A lot of these differences come from the preparation process and texture. We’ll get a better look at those aspects as we take a closer look at bisque.

Bisque is a type of soup of French origin. Generally speaking, it’s a thick and creamy soup, often including seafood. In some traditional recipes, it’s the shells of the shellfish that contribute to making the bisque thicker and richer. This is achieved using shellfish stock as a starting ingredient.

While the conventional bisque often looked at seafood, the modern bisque has a greater variety of ingredients. You might as easily find and be impressed by something like tomato bisque.

Even though this food appears simple, it often takes a fair bit of effort and time to get it right. Bisque’s storied texture and taste aren’t all that easy to hit and can sometimes pose a challenge even to experienced cooks.

The Elements Of Making A Bisque

As we’ve already noted, an important characteristic of bisque is the presence of cream. Its addition to the dish makes a huge difference and it’s important to get the timing right. Conventionally, for soups and similar dishes, cream is added towards the end of the preparation.

Bisque, on the other hand, likes its cream upfront! When making a bisque, cream gets added when the dish starts cooking.

As the dish cooks, the cream gets reduced. Equally important, it becomes intertwined with the texture, contributing to the signature thick and creamy feel of the bisque.

In this sense, the cream becomes the key element in thickening the bisque. Sometimes, additional items will be added for the purpose, like seafood shells or similar ingredients. However, unlike soups, bisque will not use ingredients like flour or rice for thickening.

Bisque represents a fairly large variety, which can be thick or thin in texture. Even so, the thinnest of bisque is expected to be thicker than the thickest of soups.

Bisque needs to be thick, creamy, and smooth. If it doesn’t meet these criteria, there’s a good chance something went wrong while cooking it!

More Information On Bisque And Soups

What Is Tomato Bisque?

Tomato bisque is a type, or rather, an extension of bisque. It’s something of a modern take on the bisque and often doesn’t include shellfish or similar ingredients. That’s fine, but it also poses a problem: the tomato bisque needs to be thick, rich, and creamy. Without shellfish stock, that can be rather difficult to achieve.

For this reason, modern tomato bisque recipes are something of a cross between conventional tomato soup and bisque.

Some recipes recommend using flour to get the food’s thickness right during cooking. Others take on a generous dosage of heavy cream at the end of a tomato soup recipe to create the richness and thick texture needed for bisque.

As you can see, none of these methods are true to the conventional, or authentic bisque recipe. In a sense, the tomato bisque is mostly a tomato soup with some added thickness of heavy cream or in some cases, flour.

Is Tomato Soup A Bisque?

Conventionally, tomato soup is not a bisque. It’s usually thinner and without the creamy richness and thick texture of a bisque. While a swirl of cream is often added to tomato soup when it’s ready to serve, that’s not nearly enough to qualify it as a bisque.

Interestingly though, many modern bisque recipes rely on tomato soup to make tomato bisque. As already noted, this usually involves a generous addition of heavy cream to make the soup’s texture match the expected texture of a bisque.

Lobster bisque is a delight for the taste buds. Its rich texture and taste really add an interesting dimension to this food. Delicious as lobster bisque is, characterizing it as healthy might be a bridge too far.

Thanks to its generous use of cream, lobster bisque is very rich in fat. It can have as much as 20% of the daily diet recommendation of fat for an adult man. And almost all of that fat is saturated. Due to its preparation, lobster bisque is rather rich in sodium as well.

It does offer a fair amount of proteins, but considering other factors, it’s not really a healthy food.

What’s The Difference Between Bisque And Chowder?

The biggest difference between bisque and chowder is the texture. A bisque is thick, creamy, and smooth. There are no chunks in bisque and any included ingredients are usually pureed. On the other hand, chowder is chunky and shows a clear presence of chunks of ingredients like meats and vegetables.

In this comparison of bisque vs soup, we see the subtle differences that separate these two famous preparations. While bisque is a subcategory of soups, it retains a distinct flair earning its distinct place. Bisque is thick, creamy, and smooth. Meanwhile, soups are relatively thinner and not as smooth as bisque.

Also, while a soup might use additional thickeners like flour, bisque usually depends on cooking with heavy cream and shellfish stock to do the job.