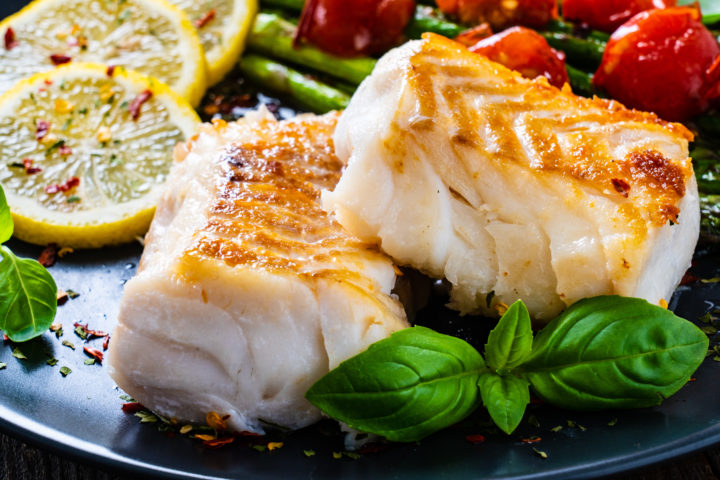 Cod and tilapia are two fish that are fairly common in the American diet. As you enjoy this fish, you may notice that there’s remarkable similarity between the two.

So what sets them apart? This cod vs tilapia comparison is intended to be a guide and a resource in better understanding the details.

Tilapia and cod are very similar and often take on similar roles in cooking and recipes. While this is an encouraging prospect of the similarities they share, it shouldn’t overshadow the key differences between these fish.

Let’s get the facts with a deeper dive.

In their culinary use, cod and tilapia are remarkably similar. However, as fish species, they’re both very different. So, let’s see what’s the difference between cod and tilapia.

Origins And The Location Of These Fish

The biggest difference between cod and tilapia is that cod is a saltwater fish. It’s usually found in the oceans, mostly Atlantic Ocean, but there’s some cod in the Pacific as well. Tilapia, on the other hand, is a freshwater fish.

Tilapia is native to Africa and the Middle East, though its popularity has seen the fish spread to various parts of the world. Lakes and ponds in the Americas, Asia, and Africa are often employed for commercial production of tilapia.

The Cost Equation: Which Is The Cheaper Option?

Another difference between the two fish is the cost. Cod is significantly more expensive than tilapia. Cod also happens to be the fish that’s more in demand.

What Is The Flavor And Texture Of These Fish?

Usually, it’s said that cod has a somewhat more pronounced milky flavor as compared to tilapia, which is something of a difference worth noting.

Cod is a popular saltwater fish that is sought after for its versatility in cuisine and its taste.

There are three principal varieties of cod. These are the Atlantic Cod, Pacific Cod, and Greenland Cod. As you can guess, the names of the fish are directly related to where they’re found.

Atlantic cod is the most popular variety and is seen around the eastern coast of USA and Canada, as well as along the western coast of Europe, although it’s more readily available in Northern Europe.

The average cod grows to about 27-34 inches and can weigh anywhere between 6-12 pounds. Fish that stays away from the shore tends to have a bigger size (usually bigger than 34-inches) and is much heavier.

At one point, the cod was abundant and supported the fishing economy for several cities, especially in North America. However, this fish soon became the very example of overfishing and the havoc this practice wreaks on the ocean ecology.

Bans and controls on fishing came into force in the early ‘90s to save this fish species. Thanks to this more careful approach, cod populations along Northern Europe have rebounded. Though there is an improvement in North American numbers, the cod stock has failed to fully recover.

Overall, the Atlantic Cod as a species is labeled “vulnerable” by IUCN. The risk to the fish population and the controls on fishing are one of the reasons cod tends to be expensive.

Even so, I’d say we, as humans, need to do more to help this fish species fully recover.

Tilapia is a freshwater fish that’s native to Africa and Asia (Middle East). Although currently, the fish is available and farmed throughout the world.

The fish has a nutty flavor and doesn’t taste or smell too fishy. These properties make it very versatile, much like the cod.

The average tilapia grows to about 14 inches and clocks its weight at around 5-6 pounds.

The Nutrition Factor For These Fish

If we are going to compare foods, it’s only natural that we consider their nutrition as well.

The good thing is that cod and tilapia are both nutritious and healthy fish. Both the fish contain B vitamins, Omega-3 fatty acids, and a number of minerals like potassium, magnesium, calcium, and more.

Generally speaking, cod is richer than tilapia in omega-3 fatty acids. On the other hand, tilapia offers more B vitamins and has a relatively higher iron and calcium content.

Given their status and production, both these fish are usually farmed commercially, rather than being solely fished.

It’s been noticed that the farmed fish usually lacks nutrition and texture compared to the fish in its natural setting. That said, this fish is still pretty good and remains popular with patrons.

It’s possible to substitute cod and tilapia for each other if you’re in a tight spot and need the ingredients quickly. Other fish like halibut, haddock, and pollock can get the job done as well.

Is Cod Safe To Eat?

Cod is safe to eat and has been a part of the human diet for several centuries now. There is, however, a consideration on whether the fish has stayed healthy for the modern world.

Some fish may contain high levels of mercury, which isn’t healthy for consumption. It’s especially risky for pregnant women, breastfeeding women, and toddlers.

The FDA and EPA usually issue warnings for fish or other seafood that might be troublesome if consumed.

The FDA considers cod safe to consume. Given its low levels of mercury, this fish might even be one of the better choices to pick.

Is Flounder Farm Raised Or Wild?

As with most fish, flounder is available as farm-raised or wild. That said, farming flounder is difficult. In most cases, farms are very reliant on capturing wild flounder every year and introducing them to the farm.

4 Fish You Should Never Eat

There are several fish species that conscious buyers should avoid. Some of these make the list because of poor farming techniques making the quality of the fish questionable, others because the fish are a target of overfishing.

And still others that are prone to ingesting toxic materials, which might risk the health of anyone eating them.

Here are four fish you should never eat:

There are several other fish that could make their way to this list. For example, tilapia isn’t a great choice either. It takes a significant amount of feed to raise the fish and its farms don’t have a stellar record.

So, we’ve just taken a closer look at two very popular white fish and their surprising similarities. As we see with this cod vs tilapia comparison, the fish taste similar and even have a similar texture.

These are clearly different fish. Cod is usually longer and heavier, and is a saltwater fish. Tilapia is a freshwater fish that’s usually smaller and lighter than cod.