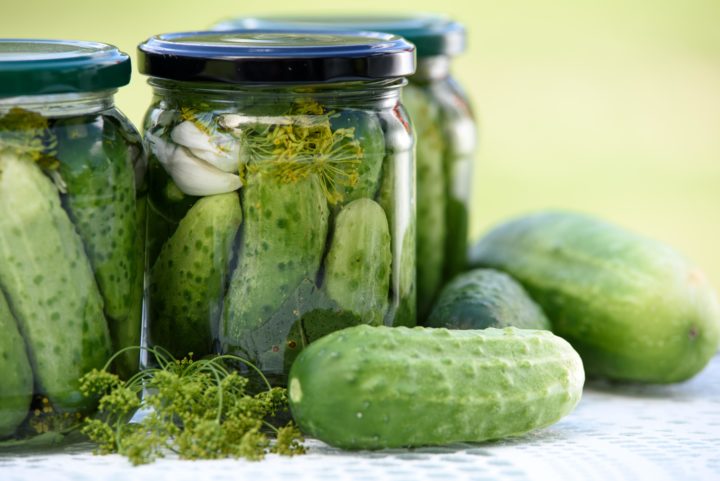 Can there even be a difference in pickle vs cucumber comparison? After all, pickles are usually made from cucumbers. However, there are small differences, especially related to what cucumbers are chosen for pickles.

Technically, you could choose any cucumber for pickling, but that’s not the best way to go about things. We want the pickle to be delicious and have that familiar crunch.

Therefore, choosing the right cucumber becomes all the more important. That said, there are some differences and points worth noting here. Let’s get to discussing them in detail.

Cucumber vs Pickle: The Points Worth Knowing

Before we go ahead with our discussion, there is a region and language difference to tackle here. In the US, Australia, some parts of the UK, and Canada, pickles are cucumbers. The word pickle is simply an abbreviation for “pickled cucumbers”.

In most other parts of the world, a pickle is any food that is processed (rather, pickled) for long-term use. In many of these regions, pickling is a process a food (vegetables, fruits, even fish and meat) undergoes to become pickled.

So, are pickles cucumbers? Well, that depends on where you live! If you’re in North America or Australia, the answer is yes. In many other parts of the world, depending on region and dialect, the answer could very well be a resounding no.

In many of these regions, a pickle (or pickled cucumber) is basically pickled gherkin. It’s worth noting that gherkin is the most common variety of cucumber used for pickling, hence the name.

In North America, Australia, and a few other parts of the world, pickles are basically pickled cucumbers. Technically, any cucumber can be pickled, though the favored choice is gherkin.

Compared to conventional (slicing) cucumbers, gherkins are short and thick and have a bumpy skin.

For most pickles the recipe involves preserving gherkin in vinegar or tarragon and vinegar. Some fermentation is allowed during the pickling process. Another popular choice is picking with brine.

In this case, the fermentation and preservation of the pickle is handled by brine. Using brine gives the pickle a sour taste, which is quite desirable for many taste buds.

On the other hand, brine alone might not do the flavor trick for many people. Many recipes involve using some garlic and dill weed with brine to add more flavor to the pickle.

Once the pickling is complete, the food can last for a relatively long time.

Apart from gherkin, another variety of cucumber used for pickling is Kirby. The kirby cucumber is quite similar to gherkin in appearance and gives the pickle a similar taste and flavor.

Since we’ve been talking about pickles and cucumbers, let’s take some time to talk about their history too. Where cucumbers were first pickled is a matter of some debate. Some place the first cucumber pickle in China, while others believe the recipe came around in Mesopotamia.

However, it is generally agreed that the cucumber was first produced (or domesticated) in India. Eventually, the plant traveled to other parts of the world. So, the pickled cucumbers could have originated in any of these ancient civilizations.

Are Pickles A Fruit?

Pickles, as we know, are pickled cucumbers. Most of us would like to identify cucumbers as vegetables, since they’re usually consumed as a salad with vegetables.

Botany, though, doesn’t agree with that approach. Scientifically speaking, cucumbers (and thus pickles) are a fruit.

The basic classification is that they are produced from flowers and contain seeds, therefore, they are fruits. In this sense, they are quite similar to squash and pumpkins, and even tomatoes.

How To Pickle Cucumbers – A Quick Recipe

There are countless recipes and methods for pickling cucumbers. It’s been a favored food for a very long time, across cultures, and around the world. So, it’s understandable that there are several recipes available.

Well, let’s start with a recipe. This is intended as a basic, no-frills recipe, though feel free to add spices and herbs like fresh dill into the mix to get it the taste you want.

Here’s what you need:

Since the process involves canning, the first step is to sterilize the jars you’ll use for the process. We want the pickle to last a long time and sterilization will help in this goal.

To start, choose good-quality pickle cucumbers. Gherkin or kirby make a good choice. Pick only those that are healthy. Wash and clean them thoroughly. At this point, you may want to slice off the blossom-end of the cucumbers.

As an optional method, some people prefer to put the cucumbers in a cold brine in a refrigerator for about three days to get an extra crunchy flavor. It’s not necessary, but it can be useful.

Once you’re ready, put the cucumbers in a jar. Add the vinegar to this jar, about 1-2 inches from the bottom should be a good pick. Add some spices if you prefer and fill the jar with water, leaving about ½ inch from the rim.

Screw on the lid and place the jar in a large pot filled with water. Ideally, the water should reach about the neck of the jar. Bring this water to a boil and let it continue for about five minutes. After this, allow the pickle to cool.

Place the jar on a baking sheet and put it in a preheated oven. Let it bake for 10-15 minutes. Once this step is done, allow the jars to cool before storing them/

Allow the pickle to settle (and ferment) for about a month or two. Once your preferred time is done, the pickle is ready to eat (and enjoy)!

Are Pickles Good For You?

Humans have enjoyed pickles as a healthy dish for millennia. And they really are packed with nutrition and benefits.

Fermented pickles are rich in probiotics, which are good bacteria and very important for gut health. Conventional dill pickles are very rich sources of vitamin K, vitamin A, calcium, potassium, and vitamin C.

Are Cucumbers Good For You?

Cucumbers are healthy and good for you. While a cucumber is mostly water and doesn’t contain much by way of proteins, it is rich in vitamins and other nutrients.

Cucumbers are rich in Vitamins K, C, and B. You’ll also find a fair bit of minerals like copper, magnesium, and potassium in them.

Much like humans, dogs too can enjoy the benefits and taste of cucumber. The fruit is low in calories. It is rich in vitamins K and C and nutrients like magnesium and potassium.

All of these are good for dogs, so that makes cucumber a tasty and healthy snack. Since cucumbers have a high water content, they can even help dogs stay hydrated on hot summer days.

The comparison of pickle vs cucumber is an interesting one. As we know, pickles are cucumbers that have been preserved and fermented. So, the pickle is simply a processed cucumber with a longer shelf life.

Cucumbers are available in several varieties, and while any of these can be pickled, the preference usually lies with gherkin or kirby.