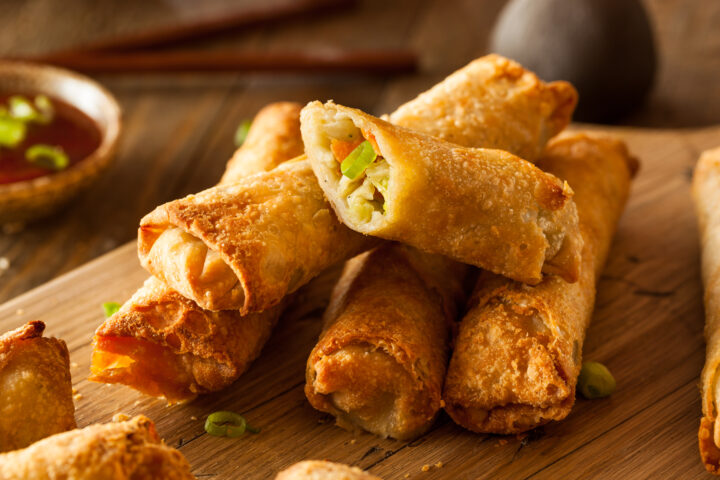 What could be the right sauce for egg rolls? The good thing is that egg rolls are quite accepting of sauces with different flavors. Whether you choose sweet or savory sauce, egg rolls can make it work.

The thought here largely goes to what sauce can make the egg roll work and complement its flavor. Equally important is knowing which sauce should you get to earn the favor of your tastebuds!

Let’s see a few options and perhaps we can find something that will match your exacting preferences on what the egg roll should taste like.

What Sauce Goes With Egg Rolls? 10 Top Ideas For You

Sweet and sour sauce is the conventional accompaniment to egg rolls. Unless you’re in the mood to experiment with new flavors, this classic sauce will be a wonderful companion to your food.

As the name suggests, the sauce has touches of sweetness and some sour flavor. The sweetness generally comes from honey, while the sour part can be attributed to vinegar.

Depending on the manufacturer or sauce recipe, there can be a few other ingredients as well. These generally include ginger, chili, or some spices. Either way, you’re going to enjoy this dip with your egg rolls.

It’s no surprise that this remarkably versatile sauce finds a spot on our list. Hoisin sauce often finds its way into Asian cuisine. And since egg rolls are an Asian dish in heart and recipe, they go very well with this sauce.

Egg rolls, sometimes also called steamed Chinese dumplings with eggs, find themselves right at home with hoisin sauce. There are touches of sweet, sour, and salty in this sauce and it often resembles plum sauce. Yet, it’s fairly different.

Hoisin sauce is a versatile pick that’s used as a dipping sauce and also a marinade for meats. With dishes like egg rolls, it’s a wonderful dipping sauce.

For recipes like the famous Pekin duck, hoisin sauce may be used as the marinade, though the duck is usually served with hoisin sauce.

Since we’re considering the versatility of the sauce, let’s not forget the most versatile of them all! Soy sauce adds a nice flavor and umami touch to egg rolls without going overboard. It’s simple and it gets the job done. That has to count for something!

Of course, the idea of soy sauce alone being the option may not seem very enticing to you. In such a case, you could try egg rolls with soy sauce as a dip and a nice salad as a side dish. Any green salad should do, but a partiality to bok choy might be recommended.

If sweet and sour works for your palate but you want something with more heat, consider sweet and spicy sauce. As the name implies, there’s some sweetness to it, while chilies bring the spicy hotness that can be a signature of this sauce.

The element of sweet can come through several elements, depending on the recipe. Even many chilies have a sweet touch before the hotness washes through. Carolina reaper, the hottest chili in the world, often gets described as having a sweet taste before the heat comes like molten lava!

Well, to be sure, your store bought sweet and spicy sauce won’t have the same SHU as the hottest chilies, but it will have that touch of sweetness and heat that makes it so unbearably addictive.

A sauce that deserves special mention here is the sweet chili sauce. Some people see it as separate from sweet and spicy sauce, while others put these sauces under the same umbrella.

For traditional sweet chili sauce, the sweet part usually comes from sugar. As you can guess, the chili part comes from chili peppers.

So, while we can split hair on differences all day long, both these sauces are pretty much the same.

Thai peanut sauce is a surprisingly flavorful and wonderful accompaniment to egg rolls. There are touches of sweet, salty, and sour with this sauce and the overall combination is just beyond delicious.

The trouble here is that this sauce can be difficult to source if you’re not in Thailand or aren’t familiar with Thai cuisine.

If you want a quick fix, perhaps just using peanut butter can work. Creamy peanut butter will work much better than crunchy for this scenario. Remember to use small quantities as peanut butter isn’t a dip.

Apart from mangoes, the sauce includes red onions, garlic, soy sauce, lime juice, and sweet chili sauce. It might include a few other ingredients, depending on different recipes.

The sweetness of mangoes with the tart and sour touch of the other ingredients makes this sauce something very interesting with the taste. It goes well with egg rolls, though the sauce itself might not feel as good to a few people.

Honey sauce has honey as the key ingredient, with soy sauce and sesame oil rounding up the flavor. It’s subtly sweet with hints of sour and goes really well with egg rolls. The dip has an interesting texture that adds to the overall flavor of the egg rolls.

What’s to keep in mind here is the choice of honey. A mildly sweet honey is best-suited for use as a sauce. A more intensely sweet honey would make the sauce sweeter and mess with the flavors.

The fish sauce is a common condiment that makes its way to several Asian recipes. It’s even the star for several other sauces, like Worcestershire sauce. You can count on the umami touch of this sauce to bring the best of flavors to the table (and the egg rolls).

Fish sauce is usually tangy and salty, so you’ll have to keep that salt content in mind if using this as a dip. A small amount should usually be enough to add flavor and fun to your food.

We’ve already considered sweet and spicy and sweet and sour sauces for our egg rolls. But what if you want the spicy part of the sauce and would rather skip the “sweet”.

Well, sriracha sauce is the answer. This famous sauce is easily available around the world and is a popular condiment for several recipes. It can be fairly hot, so be careful what sauce you pick. Although, if you’re going with sriracha, expect it to be decently hot!

It is clear that there are countless versions of sauces that people enjoy with egg rolls. While we’ve got a few popular ones on this list, it’s pretty much impossible to get them all.

Simply because variations can occur depending on your preferences. Some people prefer to make their own choice of sauce to go with egg rolls. Others might blend a few sauces together to get the flavors right. Besides, there’s always room for modification to sauces we have on this list.

For example, notice that there are no salsas or tomato-based sauces on this list. Most people find that tomato sauces don’t pair well with egg rolls. This can also include salsas, especially those that rely on tomatoes.

Yet, there are people who’d find no problem with enjoying their egg rolls with a good salsa dip or a tomato sauce.

The best sauce for egg rolls usually comes down to your own personal preferences. The conventionally used sweet and sour sauce is an excellent companion to this food.

However, if you want a change in taste, you can try some of the sauces listed here. Sweet and spicy sauce and peanut sauce can be great choices, even if they feel somewhat adventurous. If you’d like something more natural, options like hoisin sauce and soy sauce could seal the deal.

In any case, the suggestions here could help you pick a sauce that’s fit for your tastebuds. Or, you could go adventurous with these choices and pick something unconventional for your next appointment with egg rolls!