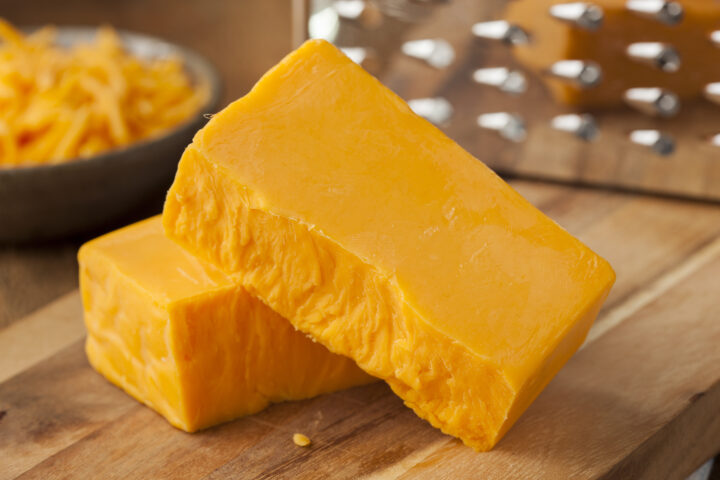 Cheddar is amongst the most famous types of cheese available. It is available in a few varieties, often depending on how sharp the cheese is.

Let’s see what separates sharp vs mild cheddar. It might be useful in deciding what type to include in your next recipe, or just for some trivia.

By and large, the biggest difference between the two is the aging time the cheese takes. However, this difference in aging also introduces a few other characteristics worthy of not.

Sharp vs Mild Cheddar: All You Need To Know

The Difference In Aging For Both Types

The key difference between sharp and mild cheddar is how long the cheese gets to spend while aging.

Sharp cheddar gets aged for longer. Usually, this process can take 9 months to 2 years. In some cases, cheddar might be aged for 5 years or even longer.

The longer it spends aging, the sharper the flavor of the cheese.

The Changes In Texture And Taste

It is the different aging times that cause all other changes that differentiate mild and sharp cheddar. And of course, with aging comes a difference in taste and texture.

While aging is the one that causes the change, it is the difference in taste that truly separates mild and sharp cheddar cheese.

As the name implies, sharp cheddar cheese has a sharp flavor. It’s tangy and slightly bitter. This cheese also tends to be harder and takes more effort to melt.

Mild cheddar cheese has a relatively mild flavor and texture. It feels somewhat soft and smooth and is relatively easy to melt.

The Types Of Cheddar

To be clear, there are a whole lot of types and varieties that fall under the “cheddar” name. Keep in mind, there is no absolute distinction of aging and the type of cheddar it produces.

While most people in the know put sharp cheddar at 1 year of aging, some people, including businesses might take an entirely different route.

There are no legal labeling requirements, so some businesses may take the freedom to label cheddar aged for a year as extra-sharp cheddar. When you’re buying, the smart move is to check the duration of the aging process, rather than going simply on the label.

However, sticking to the basics, we can consider the following as the main types of cheddar:

Some people also add medium cheddar to the list, though it doesn’t quite fit all that well.

A change that happens as we go through the varieties is the texture and the sharpness. Mild cheddar is soft and has a mild flavor. Sharp cheddar is tougher and has a bit of a granular texture.

There are varieties of cheddar that have been aged for 10 years or longer. At this point, the cheese is more prone to have large granules and won’t cut neatly.

Because of the formation of calcium lactate, the cheese will have a crunchy and salty flavor. This cheese doesn’t melt well and isn’t a good addition to cooking. Instead, it can be enjoyed on its own, perhaps with a side of beer or wine!

Is There A Difference In Color Between The Types Of Cheddar?

Most of the cheddar you see is orange. Sometimes, you may notice a difference in hue between different packs of cheddar.

So, how important is the color of cheddar cheese and does it make a difference?

The color doesn’t make a big difference in the taste of cheddar. Cheddar is naturally white or pale yellow. The orange color basically comes from a vegetable dye added to the cheese when it’s made.

This dye is annatto. It is a vegetable dye sourced from the annatto plant. The main job of the dye is to give the cheese some color. However, it does also add a subtle nutty flavor to the cheese.

In most cases though, you won’t see a difference in flavor between two types of cheddar cheese, based solely on the dye.

On New York And Vermont Cheddar: A Touch of Mild And Sharp Cheddar

While they’re pretty close, New York and Vermont appear to have a sharp difference in the cheddar they prefer. As such, the cheddar cheese gets a differentiation based on whether it’s New York-style or Vermont-style.

New York Cheddar is more on the sharp side of things. It has an orange color and a prominent, sharp taste. This is largely attributable to the long aging process that this cheese is subject to.

Vermont cheddar takes a different route altogether. The key characteristic of Vermont cheddar is that it skips the food coloring and keeps its natural white (or pale yellow) color.

Vermont-style cheddar is not a classification based on taste or sharpness of the cheddar. It’s simply the dye-less cheddar produced in Vermont and some other states.

Though they are very closely related, there are notable differences in a sharp and mild cheddar comparison. Sharp cheddar undergoes aging for a longer time, which gives it a different taste and texture as compared to mild cheddar.

Sharp cheddar has a sharp taste and a tougher, granular texture. Mild cheddar, true to its name, has a mild taste and is relatively soft and smooth. Mild cheddar is also easier to melt as compared to sharp cheddar.