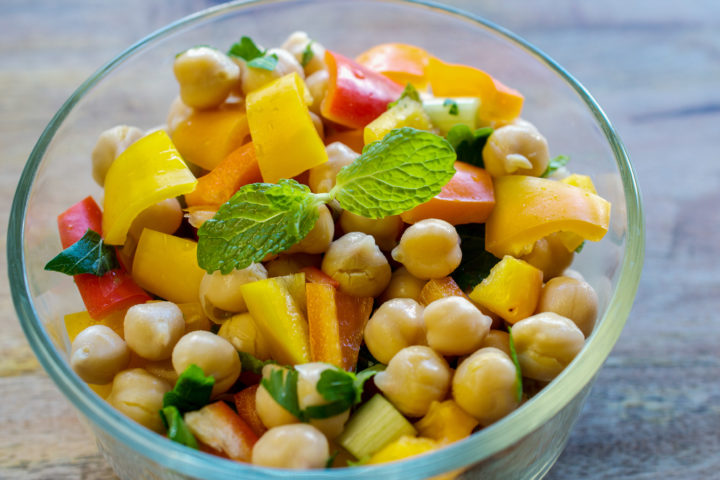 Ever wondered what’s the difference between chickpeas and garbanzo beans? While there is often a presumed difference, the truth can be quite surprising.

The difference doesn’t have to do with just the food, but it’s also worth considering the varieties of the plant and how we know them.

This article will take an in-depth look at chickpeas vs garbanzo beans and see if we can find any differences.

There is a difference in how the varieties of chickpea are named, and that can make things clearer. So, we take a closer look at them and see if we can spot any differences.

Chickpea Or Garbanzo? Which Is The Bean?

A Quick Note On Chickpea, The Plant

Chickpea is a plant that’s classified in the “pulses” group. Pulses, in turn, are the non-oilseed variety of the group legumes. As you can guess, chickpeas are legumes, as are peanuts, lentils, and peas.

Generally speaking, legumes are a group of plants that grow edible seeds in a pod. Legumes like peanuts can be crushed to extract edible oil (peanut oil). On the other hand, chickpeas don’t have any oil in them, hence they’re classified as a non-oilseed variety of legumes.

The Naming And Varieties – English, Spanish, And Indian

The largest difference between garbanzo beans vs chickpeas lies in the language you speak!

Chickpea, as we know, is an English word and is the most common name for this plant. Garbanzo beans is simply the Spanish word for chickpea.

Since chickpea is a plant that’s been domesticated for thousands of years, it has a pretty long history. Apparently, the Latin word for chickpeas is cicer. Eventually, the food reached France and got the name chich or poise chiche.

Traveling to England, the word became chickpeas, which is how most of us know the word.

The Spanish though, took on a different direction, and ended up calling it garbanzo beans.

Now that we’ve got the Spanish and English angles covered, let’s look at the Indian angle. Interestingly, this side deals with the varieties of chickpea and provides further clarification on the naming and the food.

Varieties Of Chickpeas And The Popular Nomenclature

To put it simply, there are two varieties of chickpeas. These are:

In India, chickpeas are known as chana. The two common varieties are Kabuli chana and Desi chana. Kabuli means “from Kabul” and desi means “local”. The term Kabuli is probably an indicator of the origin of chickpeas, since they’re believed to have originated in Central Asia.

However, assuming food origins based on nomenclature isn’t usually a good idea, so we’ll quit the speculation here.

Anyways, Kabuli chickpeas are relatively large, have a thin outer coating, and have a light color. These are the ones that most of us are familiar with as chickpeas or garbanzo beans.

Desi chickpeas are usually small and have a thicker outer coat. They can have multiple varieties depending on color. Generally, these include black, brown, yellow, and green.

Whether it’s Kabuli or desi, they’re both chickpeas and garbanzo beans.

In a way, the term you use depends on the language you speak. Your geographic location may also play a part in what you call this food. Another common food with similar differentiation elements and similarities are butter beans and lima beans.

On Nutrition And Culinary Uses Of Chickpeas

Chickpeas are a rather versatile food. They find use in several recipes, including curries, hummus, soups, stews, vegetarian meatballs, and a lot more.

When cooking, they can be boiled or roasted, or consumed pretty much like kidney beans. Chickpeas are available as canned or dry food. While canned chickpeas are ready to use for cooking, some additional preparation is usually necessary for dry chickpeas.

Much like beans, you’ll need to soak garbanzo beans in water for several hours and then drain the water before cooking them.

Chickpea flour is a rather popular option for those who want a gluten-free flour alternative. It’s worth noting that chickpea flour has a distinct flavor. While this goes swimmingly with several recipes, it’s something to keep in mind when cooking.

Chickpeas are full of nutrition and especially important in the diet of vegans and vegetarians. They’re rich in vitamins A, C, and E. You’ll also get plenty of choline, magnesium, potassium, and iron.

Any comparison or differences between to separate chickpeas from garbanzo beans doesn’t have much relevance. They are the same thing. The food is called chickpeas in English and garbanzo beans in Spanish.

There are a few varieties of chickpeas, but there is no real functional difference in terms of nomenclature. Garbanzo beans are chickpeas.