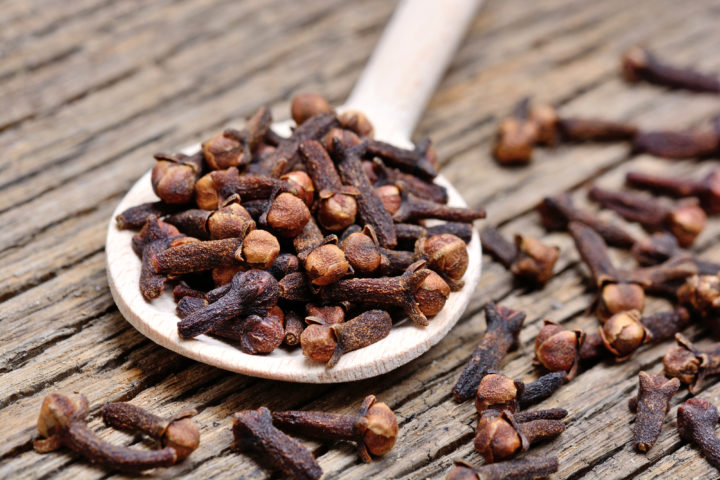 Whole cloves are dried brown buds that come from reddish flowers of a tropical evergreen tree. They are among the most intensely flavored spices. Their usage is more than versatile and clove has its special place in many traditional cuisines all over the world.

Cloves are usually used as an aromatic spice in savory dishes, marinates, sweets, jams, baked goods and drinks. They are nail-shaped, subtly sweet spice with slight notes of bitterness, heat and warm flavor. Its flavor is intensely pungent and aromatic.

If you happen to forget buying it for your recipe, here are good examples of cloves substitutes to maintain the desired aroma of your food.

Ground cloves are the most suitable substitutes for whole gloves. They come with the same yet stronger taste which means you should be careful with it when using instead of whole cloves. Ground cloves go well with almost all recipes that require whole cloves.

You can use this powder in both savory and sweet dishes including soups, marinades, puddings, bakery and drinks. It also works well with sauces, rice and meat.

Perhaps the only disadvantage of ground clove is that it tends to change the color of your dish. If you mind it then choose another substitute.

Cinnamon is a pungent spice with a sweet and woody taste. Compared with cloves it also offers slight citrus notes and some spiciness. Nutmeg has a warm and nutty flavor. When mixed with orange peel these two get a more similar flavor to cloves. You can use this combination both in whole and powdered varieties.

It will work wonders in baked goods, drinks and marinades. You can choose it to replace cloves in pies, cookies, rolls and not only. Several types of savory dishes also go well with cinnamon, nutmeg and orange peel mixture.

If you don’t have cinnamon and orange peel to make the previous substitute, you may just use nutmeg instead. It is made of ground seeds of the nutmeg tree and both the whole seeds and powdered versions are available on markets. You can use the variety that best goes with your dish.

You can use nutmeg to substitute cloves in soups, sauces, vegetable dishes, meats as well as in bakery, including cakes, pies and cookies. It tastes similar to cloves in puddings and beverages.

Sometimes mace and nutmeg are considered to be the same but despite coming from the same family, they are different seeds and spices. Compared with nutmeg, mace tastes milder and has a less flavorful aroma similar to a good combo of cinnamon and pepper.

It comes with the desired warm and sweet-woody notes complementing both sweet and savory dishes such as cakes, pies, donuts, potato, soups, vegetables, sauces and pastry. You can use it with meats, fish and poultry as well as with rice.

Allspice is the dried brown berry coming from the tropical evergreen Pimenta dioica tree. It is relative to cloves and can replace it in many meals. It tastes like a mixture of pepper, clove, cinnamon, and nutmeg.

Choose this substitute for pies, cakes and other baked goods. It may play as a good seasoning for pork and poultry marinades since it has a peppery touch. There are both whole and ground forms of a to make your choice easier.

Five-spice powder is a combination of 5 different yet similar spices. It includes star anise, cinnamon, fennel, szechuan peppercorns, and cloves. The latter ingredient prompts that you can use it instead of cloves.

It comes with a rich mixture of flavors and tastes but they are so harmoniously mixed that the final taste is sweet, warm and licorice-like.

Five-spice powder best works in savory dishes especially with meat, fish and poultry. Compared with other alternatives, this one comes with a little bit of saltiness, which mainly compliments savory meals.

Offering a kind of sweet and licorice-like flavor, star anise is often used in Chinese dishes. It tastes similar to cloves.

It can replace cloves in soups, sauces,marinades, pies and bakery. You can use either a whole or powdered version of this spice depending on your recipe.

Cardamom is a pod spice originating from the ginger family. It is usually used in Indian meals. It tastes more citrusy than pungent and has some warm and peppery fragrant. Its flavor is zesty citrus that seems to be a mixture of sweet and spicy notes.

There is something very common between cardamom and cloves and it’s the recipes they are used in. Just like cloves, cardamom is widely used in many desserts and beverages.

It works well with savory and sweet dishes providing a citrusy and warm combination of flavors. Choose it for meat, marinades, sauces, curries and spicy baked goods.

Pumpkin pie spice and apple pie spice are both perfect alternatives to cloves in bakery, especially in pies. They are well-balanced mixtures of several spices.

The traditional pumpkin pie spice includes nutmeg, cinnamon, and cloves. Apple pie spice, in its turn, includes cinnamon, nutmeg, and allspice. As you see, all of the spices are relative to cloves and can be used as great substitutes for cloves.

If you have these two spices in hand, then you’d better give priority to pumpkin pie spice as it contains cloves and is closer to cloves in taste than apple pie spice.

In order to keep that warm spicy hint in the dish you can also use ginger in place of cloves. Ginger has a slightly peppery and sweet aroma.

Both cloves and ginger help to lose weight and burn fats. So, if you use cloves in your everyday diet especially in teas, then you can safely replace it with ginger.

Many fruits such as apples, oranges, bananas, peaches, blueberries, grapes and apricots go well with ginger. This means, you can also combine ginger with fruits that call for cloves in desserts or other recipes.

Licorice root has a pungent, bitter and sweet taste. You can use this in teas and enjoy the reisnsinet flavor of cloves in it. It may also have some ntes of peppermint and anise star both of which go well with cloves.

Both licorice and clove have digestive properties and they help fight slow digestion. However, licorice root is not recommended for children, pregnant women, nursing mothers and people with liver problems.

Can you substitute allspice for ground cloves?

Yes, you can substitute allspice for ground gloves as it comes both in whole and ground forms. This spice tastes similar to cloves and is a good replacer for ground cloves  in many recipes.

How to substitute garlic powder for cloves?

Whether you use freeze-dried, dehydrated or fresh garlic in place of cloves, you need to go by this ratio: ¼ teaspoon of garlic is equal to 1 clove.

Can you substitute ground cloves for whole cloves?

Despite the fact that cloves have a unique fragrance and they seem to be irreplaceable for several dishes, they still have good alternatives that can help you maintain the color, the taste and the warm aroma of many savory dishes, sauces, sweets, desserts and beverages.

Try to make your choice wisely when it comes to sweet and salty cloves substitutes because some of those spices may ruin the taste of your dish if you don’t know how they taste. Make sure you are well-aware of the flavors of these flavorful spices and then choose them for any of your recipes.