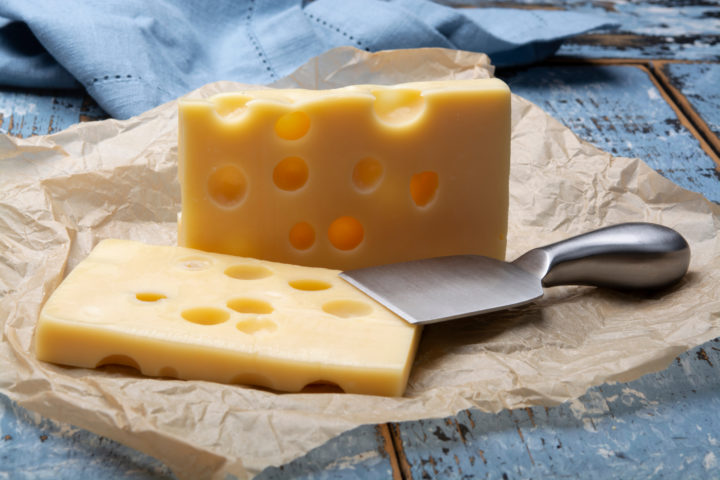 Yet, there are several options that can be the right fit. This wonderful cheese has several workable substitutes, including conventional cheese and vegan options.

It’s worth noting that emmental cheese is named after Emmental, the place in Switzerland where it was first made. It’s also known as Emmentaler, or Emmenthal.

This is a yellow, medium-hard cheese with holes, which in many depictions have become the classic representation of cheese.

With the basics covered, let’s take a look at the best food replacements for emmental cheese.

Fontina is an Italian cheese that’s incredibly rich and a wonderful substitute for emmental. The cheese has a buttery taste with notes of toasted nuts. Made from unpasteurized cow’s milk, this is something of a semi-hard cheese.

Its texture is fairly smooth, though there are holes similar to those you’d find in emmental cheese. The cheese has a great taste and mouthfeel and is fairly versatile.

You could use it with pizza or on a cheese platter. However, keep in mind that this cheese will not melt, so it’s not intended for use as fondue cheese.

Here’s another famous Swiss cheese that can happily take on the role of its cousin. Gruyere behaves very similarly to emmental cheese. It has a similar flavor, taste, and texture.

Gruyere cheese also melts like emmental cheese and thus finds use in fondue. Conventionally, gruyere is cured for at least six months. This versatile cheese may be enjoyed on a platter, in a sandwich, or as cheese slices.

For most recipes, gruyere is the best substitution. It is the ideal substitute to make spaetzle, sandwiches, pizza, or even if you want to eat the cheese.

Jarlsberg cheese is named after its place of origin in Jarlsberg, Norway. Despite its different geographic origin, this cheese behaves and looks quite similar to emmental cheese. It has the same buttery taste and mouthfeel.

Raclette cheese is a well-known type of cheese and shares its name with a swiss dish. The cheese is usually molten, so it gets a similar approach as emmental and can replace it in some recipes.

Although, the method of preparation and the flavor might change slightly with this substitution. Raclette is conventionally heated on a fire or grill and added directly to the food. This is somewhat different than what is emmental cheese used for generally and thus causes a difference in flavor.

The famous and common gouda cheese can take on the role of replacing emmental cheese in some recipes. The semi-hard cheese has a mild taste and goes wonderfully with most recipes.

Gouda as a substitute for emmental cheese works best when used for making fondue or similar foods. This cheese melts well and is pliable and versatile enough for most recipes.

While its taste is great, gouda may not work as an emmental substitute for recipes where the cheese doesn’t melt. Mostly, this is because gouda has a different appearance and texture. The cheese isn’t yellow and doesn’t have prominent holes.

Parmesan is a famous Italian cheese made from cow’s milk. This is a hard cheese, but it is very famous and finds its place in popular foods like pizza, pasta, and lasagna.

It also has a similar taste as emmental cheese, thus making it possible for parmesan cheese to work as a substitute. However, it works best where the recipe calls for solid cheese.

You could also use it for recipes like sandwiches or soup. Although, it doesn’t quite work with recipes that call for melted cheese.

Here’s another Italian cheese that can do the job just right if not entirely perfect. Provolone is famous and is produced in Italy. The cheese can sometimes take on a yellow color. While it won’t be as noticeably yellow as emmental, it’s often good enough to get to work.

Provolone has a sweet taste but its overall taste sharpens as the cheese ages. It’s most popular use is with sandwiches, though you can find it in several other recipes as well.

Though it’s not the most common choice, provolone can also work after melting for use in specific recipes.

French Comte is a cheese with its origin in the areas along the border of France and Switzerland. This cheese is made from unpasteurized cow’s milk and has that wonderful yellow color.

It doesn’t have any holes though, which makes it very different from emmental cheese in appearance.

While we specifically mention recipes that require you to melt cheese, you can also enjoy the cheese solid. Of course, it doesn’t have the same appearance of emmental cheese, but the tastes are very much compatible.

Brie is a French cheese whose soft and creamy texture makes it a good fit to work as a replacement. It finds application in several recipes, thanks to its wonderful texture and taste. It’s often used as a dip, though you can also use it as cheese slices.

Parmesan is a hard cheese with a very strong buttery flavor with notes of toasted nuts. This flavor profile should seem similar to emmental, but parmesan has a fairly strong flavor, which is way beyond emmental.

When using this cheese for substitution, you’ll have to consider pairing it with a mild cheese to make the flavor more manageable.

Cheddar is another famous and strongly flavored cheese. It is an acceptable replacement if you’re in a pinch. Much like parmesan, cheddar stands on its own merit, rather than its taste similarities to emmental cheese.

Better yet, pick a mild cheddar, which will go fabulously well as a substitute.

Emmental Cheese is a famous and classic cheese, whose shape has become the visual definition of cheese. In many cases, emmental is a popular option to represent cheese in general.

This cheese is extremely versatile and works with several foods and recipes, Yet, if you find yourself in need of emmental cheese substitutes, you can  use an option from this list.