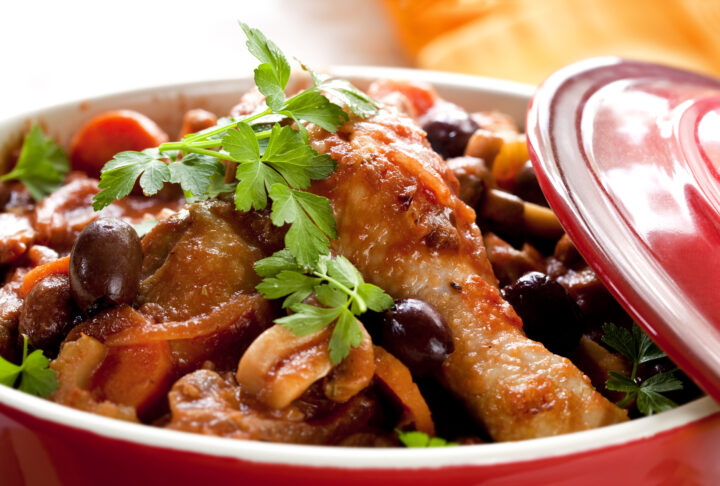 The crock pot is famous for its slow cooking that brings wonderful flavor and taste to recipes. It works with conventional foods, but what if you’re dealing with something frozen like a chicken? How long to cook frozen chicken in crock pot to get good results?

It’s a simple enough question, but there are several layers to this, including if it’s even possible to cook a frozen chicken in a crock pot. After all, the frozen chicken needs to be thawed before it cooks.

When cooking, it also has to reach an optimal internal temperature to be suitable and safe for consumption. Can a crock pot handle all these things? Let’s see if it can and how long it takes to cook the chicken.

Can You Put Frozen Chicken In Crock Pot?

Before we discuss time and cooking prowess, let’s consider if it’s even a good idea to put a frozen chicken in a crock pot. For most cooking methods, the first step is to thaw or defrost the chicken before you start cooking.

For a crock pot though, it’s no trouble if you decide to put the frozen chicken straight into the crock pot. There are countless recipes on the internet that show you how to achieve exactly this.

Even Crock-Pot (the company) has gone ahead and said that it’s okay to add frozen meat to their slow cookers. However, they recommended increasing the cooking times.

It has also been suggested to add some warm water to the crock pot while thawing, so that there is no change in temperature that shocks the meat. Basically, the warm liquid acts as a cushion to prevent sudden temperature changes, which would otherwise be bad for the food.

A Different Perspective From The USDA

The U.S. Department of Agriculture (USDA), however, is not sold on the idea. USDA suggests that meat should get a proper thawing before it sees the inside of a microwave or slow cooker (including crock pots).

Their logic is pretty straightforward. Slow cookers take a lot of time to cook food. Meat like chicken, while thawing and cooking in a slow cooker will spend hours in the range of dangerous temperatures.

However, with slow cookers, it can take hours where the meat is in the dangerous zone. So, even if the temperature eventually goes high and kills the bacteria, there’s a good chance that damage to the meat will already be done.

Therefore, there are several recipes on the internet that tell you how to cook frozen chicken in a crock pot and it appears that the company too is onboard with the idea. However, the USDA disagrees with this approach.

Personally, I feel that USDA’s suggestion has some merit, if for nothing else, then just my trust in the work of this agency.

So, if you choose to thaw and cook frozen chicken in a crock pot, I’d suggest being careful about it. The smarter move would be to thaw it the regular way before putting it in the crock pot.

How To Cook Frozen Chicken In Crock Pot

One of the most important elements for the USP of crock pots is their convenience. You put the food in, walk away, return after a while and enjoy good food.

So, it stands to reason that many people would like to follow the same approach when cooking meat. Add the frozen chicken to the crock pot, put in the ingredients, and return after a while to a sumptuous meal.

As explained in the other section, my suggestion is that you go along with USDA regulations and thaw the meat the conventional way before putting it in the crock pot. That seems to be the smarter and safer way to go about things.

Yet, there are possibilities where meat could be thawed and cooked in a crock pot. Let’s take a quick look.

Generally speaking, chicken breast is the favored meat to thaw and cook in a crock pot. There are no bones in this meat and it is soft enough to cook quickly.

So, it doesn’t spend as much time in the “danger zone” of temperature where bacteria might thrive in the meat. Yet, it’s a better idea to thaw it first, even if the job can be done in a crock pot.

When cooking the chicken, or for that matter, any meat, keep a food temperature probe at hand. Use this to check the internal temperature of the meat. This temperature should be at least 165°F for chicken.

Now that we’ve got the specifics, let’s get cooking the recipe.

Here’s a simple recipe for cooking chicken breasts in a crock pot. I’d like to say it’s quick as well, but going slow and getting it right is the whole deal for crock pots.

It is, however, not that keen on continuous input from the chef. So, the recipe is quick in the sense that you won’t have to do too much work as it cooks. Although, since the chicken is getting thawed in the crock pot, be extra vigilant to ensure everything goes right.

Here’s What You Need

The recipe requires the following ingredients:

Using butter in your recipe is optional, but fat adds a whole lot of flavor and taste. If you want to keep the food lean, it’s okay to skip the butter. If taste is the driving concern, adding some butter is a good choice.

There you have it, a simple and straightforward way to cook chicken in the crockpot. Adding a small amount of warm water to the pot might help, when you start.

The chicken will release a fair amount of water as it thaws and cooks, so you don’t need to add too much water. Adding a lot of water might end up making it too watery. On the other hand, skipping water entirely could make the chicken somewhat rubber.

Striking a balance is the key.

Thawing and slow cooking meat might give bacteria enough time to make the meat unhealthy. So, it’s best to thaw the chicken the conventional way before you cook it in a crock pot.