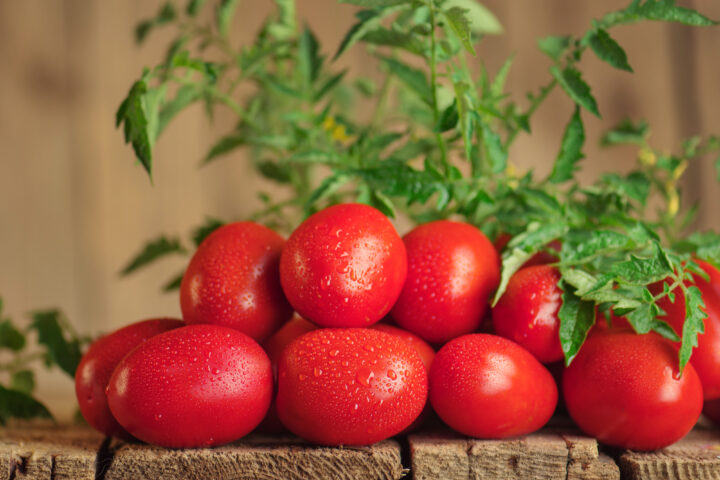 Plum tomato, also known as paste tomato, is one of the basic ingredients in Italian tomato paste, red sauces, and many dishes. It has an oblong shape and is dense in texture, comes with fewer seeds, and is low in water content which makes it perfect for canning, making thick tomato pastes, sauces as well as adding to salads, side dishes, and roasted veggies or meats.

If you are about to make delicious pasta with red sauce but you don’t have plum tomatoes, there are several good plum tomato substitutes to consider. Here we offer substitutes to help you prepare any dish that calls for this unique type of tomato.

If you are looking for a plum tomato alternative to make pastes, pasta sauces, or add to cooked dishes then the first three substitutes are the easiest and most suitable options to consider.

Canned tomatoes come in a variety of forms from whole to sliced and you can easily substitute them for plum tomatoes.

Unlike fresh tomatoes, they are available all year round and carry the same taste as fresh ones. Use 1 and a half cups of canned tomatoes to substitute 1 pound of fresh plum tomatoes.

Tomato puree is another easy and quick alternative to plum tomatoes and its biggest advantage is that it’s made of plum tomatoes and holds its taste and flavor. It’s already in a puree form and there is no need to spend time and effort on preparation.

Compared to canned or fresh tomatoes, you don’t even need to spend time peeling and slicing. You can just add it to the rest of the ingredients and cook the desired way.

Tomato paste is a regular ingredient in many cuisines and it’s used for cooked dishes and sauces. If you don’t have the previous two options but tomato paste is one of your regular products in the fridge, then go ahead with it.

Both tomato puree and tomato paste are thick in consistency and low in water content, that’s why they are ideal plum tomato replacers. They will also keep the taste and flavor of the dish.

Tomato passata originated from Italy and is widely used instead of plum tomatoes in pasta sauces, pastes, and cooked dishes. It’s an uncooked tomato puree strained from seeds and skin. It’s also used as a pizza sauce and you can make marinara sauce with it too.

So, what else do you need to substitute plum tomatoes in a cooked or baked dish? You can add salt, pepper, and a bit of sugar to improve its taste and make it more suitable for sauces and pastes.

Now, let’s see what other varieties of tomatoes can be used to replace plum tomatoes. Here we have Campari tomatoes which is a type of hybrid tomato with high sugar levels and low acidity. It’s larger and juicer than plum tomatoes.

Campari tomatoes are grown in Canada and they are available in many US markets. So, if you find them, you can use them in place of plum tomatoes both fresh and cooked. Since they are juicy, they are often used in juices and cocktails. Consider them for liquid-based dishes including soups, stews, and thin sauces.

Due to their shape and size, they can be served on their own or you can add them to salads and side dishes. As for pastes and sauces, you can use grape tomatoes the same way as plum tomatoes.

Cherry tomatoes are perhaps one of the most popular small-sized tomatoes you can find everywhere. They are similar to plum tomatoes and the only difference is perhaps the number of seeds that are more in cherry tomatoes. So, de-seed them before using them in sauces and pastes to replace plum tomatoes.

Regular tomatoes are quite large compared to plum tomatoes but they can work too. They are easy to find, more affordable, and available all year round.

You can use them both in cooked and fresh dishes including soups, hot sauces, pastes, salads, and baked goods. Their seeds are larger and you can easily remove them.

As for beefsteak tomatoes, they are one of the largest varieties of tomatoes with an unusual ribbed shape. They are meaty and contain a few seeds.

The skin is thin and soft. You can remove the skin and the seeds, slice it, puree it, or prepare it the way you like to use it in place of plum tomatoes.

San Marzano is typically one of the many varieties of plum tomatoes. They have thick flesh and a sweet flavor. If you can’t find them fresh, there is a canned version of it to consider.

They are more expensive than other tomatoes. You can use it in stews, soups, and roasted, cooked, and baked dishes including pasta and pizzas.

Heirloom tomatoes are large, ribbed in shape, and colorful. They come in red, green, purple, orange, and yellow colors and they taste sweet with a slightly sharp flavor.

You can find them from farmers’ markets when in season and use them fresh in salads, side dishes, and cooked in sauces and soups. Thanks to their wide range of colors they look appealing in salads.

Maybe you have sun-dried tomatoes in your condiment rack? If yes, then you need to know that they taste awesome in sauces, appetizers, dips, pasta, soups, and even pizzas.

Sun-dried tomatoes are available all year round and they are usually sold at spice sections either fully dried or in cans of oil. They are chewy but become a little bit softer when cooked just like mushrooms.

Finally, there are bell peppers as plum tomato alternatives in case you have allergies to tomatoes or want to change up your recipe with a new ingredient. The colorful bell peppers go well with salads, sauces, and roasted and cooked dishes. Of course, the final taste won’t be the same but the overall result will satisfy you. They pair well with meats and pastas too.

What are the varieties of plum tomatoes?

Are there canned plum tomatoes?

Yes, you can find whole peeled plum tomatoes sold in cans. They come with the seeds and you may need to remove them beforehand.

Can I pickle plum tomatoes?

Yes, for sure. Roma tomatoes are one of the best varieties of plum tomatoes for pickling. Choose fresh and ripe ones, pickle and enjoy their super delicious taste.

We can’t count all the varieties of tomatoes but we know which ones to use in particular dishes to get a tasty and amazing result. Plum tomatoes may be expensive compared to regular ones but they are worth it. However, some other types of plum tomato substitutes are interchangeable because overall they have many similarities and can bring the same flavor and texture to your dish.