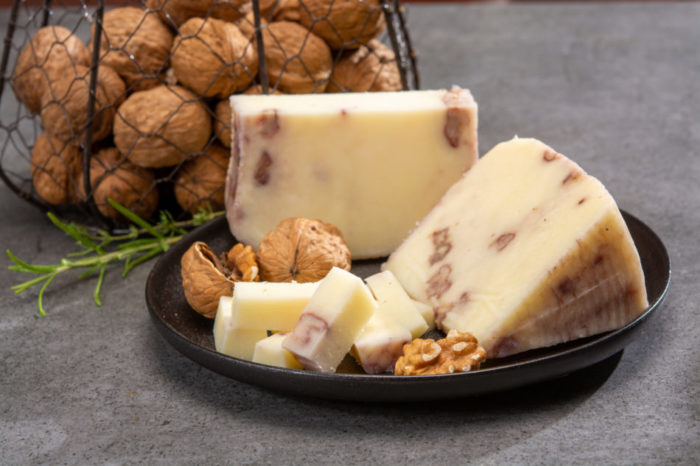 Provolone is a cow’s milk cheese originating from southern Italy. It’s a semi-hard cheese that’s aged from 4 months to up to 2 years. It is used in many Italian dishes, pasta, salads, and even desserts.

Provolone has a complex, sharp, nutty, and buttery flavor. The older the cheese, the more pronounced the flavor. Some varieties come with a milder and a bit sweet flavor.

Let’s see if there are provolone substitutes to use whenever you can’t find it in stores or want to try other cheese you have in hand. There are some good options and we’ll discuss them below.

Best Substitutes for Provolone To Try

Cheddar cheese varies from hard to semi-hard and if aged the same way as provolone then it’s the best substitute for provolone cheese in any dish. So, choose the one that comes with the same texture as provolone.

It’s meltable and becomes gooey in cooked dishes. You can use cheddar and provolone interchangeably. Cheddar is easier to find in supermarkets as it has worldwide fame.

Compared to provolone, cheddar is less elastic. It may also come in several colors from white to yellow and orange.

Mozzarella is another close relative to provolone as the technique it’s made with is almost the same. The best part about it is that it’s easy to find almost everywhere. Mozzarella is made of buffalo milk and if you don’t want to use an alternative made of cow’s milk, then this can be a great solution.

However, you should use the low-moisture variety to get the best result because provolone is a semi-hard cheese. Check if the chosen cheese is aged and then buy it as fresh mozzarella comes with a lot of moisture. You can use it in the same quantity in almost all recipes calling for provolone cheese.

Fontina cheese is an Italian semi-soft cow’s cheese with a nutty and buttery flavor. It’s a versatile cheese that can be used instead of provolone both in hot and cold dishes. You can shred it and use it the same way as provolone.

It’s an ideal melting cheese to add to hot dishes, pasta, soups, chowders, and sauces or use as a topping. There are also Swedish, Danish, and French versions of this cheese as well as varieties made in the US. The Danish and Swedish varieties are covered with red wax.

Muenster cheese is made of cow’s milk and its rind is orange. It’s pale yellow inside, the texture is semi-hard and smooth and the flavor is strong. It’s the American version of the French Munster cheese and you can easily find it in stores.

You may use it along with mozzarella to get the desired flavor and texture because mozzarella comes with the necessary fats and flavor, while muenster provides the best texture.

Parmesan cheese is another easy substitute for provolone. It’s made of sheep’s milk and is not aged too long. Although it is harder in texture and saltier in flavor, it’s still one of the best alternatives to consider for some hot dishes.

Parmesan is among the types of cheese that are widely used in cooking. It’s a melting cheese and pairs well with pasta, veggies, pizzas, baked goods, casseroles, fondues, and many more. It’s usually shredded before use and it’s not hard to find shredded parmesan from stores too.

Edam cheese is a semi-soft, round, and cylinder-shaped cheese that’s sealed in a  special red wax coating. It is native to the Netherlands and is considered a melting cheese. It’s made of either cow’s or goat’s milk and tastes nutty and mild.

Although edam cheese is basically eaten on its own, you can use it instead of provolone in many cold and cooked dishes as it has a melting texture.

Gouda is similar to edam cheese and the main difference is in the fat content each of them comes with. They are both native to Dutch and tend to melt well in hot dishes.

You can use gouda in sauces, soups, and toppings instead of provolone. Gouda cheese is mild, nutty, and slightly sweet with caramel undertones that are reminiscent of butterscotch.

Gruyere is a swiss cheese usually aged for 6 months. It’s used in a variety of ways in many dishes. You can melt it, grill or shred it and use it in hot or cold dishes. It has a rich creamy, nutty and salty flavor.

It may not be suitable for desserts but it is perfect for fondue, popular French sandwiches, and cooked meals. The younger the cheese the creamier its flavor and the older it is the earthier the flavor.

Emmental cheese is another Swiss cheese yellow in color and medium-hard in texture. It’s one of the most popular Swiss cheeses and you may easily find it in local supermarkets.

Compared to provolone, it comes with holes and is usually used as an appetizer sliced, added to sandwiches, or eaten on its own. You can also use it in cooked dishes and grilled sandwiches.

Can I substitute provolone cheese for provolone?

Provolone cheese is known as little provolone. However, it’s not the only difference. Provolo translates as aged mozzarella and it’s made the same way as mozzarella. Anyway, you can use it instead of provolone if you have it in hand.

What can I use provolone cheese for?

Since it melts well you can use provolone cheese in pizzas, casseroles, grilled sandwiches, salads, desserts, baked pasta, and other baked dishes.

What meats are good with provolone?

You can pair it with roasted ham or turkey to enjoy its smoky and nutty undertones. It goes well with any dish that calls for cheese topping.

When it comes to cheese substitutes I always recommend leaving your comfort zone and starting doing experiments. Many kinds of cheese come with similar features and can be used interchangeably.

The same refers to provolone cheese and we are happy there are so many provolone substitutes with the same melting properties, similar taste, and texture. These features make them equally suitable for hot and cold dishes.