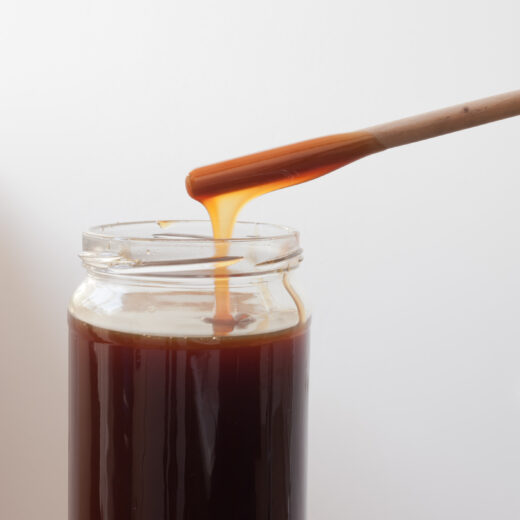 Rice malt syrup is a natural sweetener used as a spread on pancakes and smoothies as well as a common sweetener for desserts. It’s made of organic brown rice and is considered a better sweetener than sugar and some other sweeteners.

While sugar is available everywhere, you may hardly find rice malt syrup in common stores. So, we offer rice malt syrup substitutes that have similar consistency, taste, and flavor and can be used in the same recipes calling for this sweetener.

You may purchase this syrup from Asian stores but if you can’t then consider one of the substitutes mentioned below.

If you are not allergic to honey or your dish is not meant for kids, then honey is the first substitute for rice malt syrup as it comes with almost the same texture and has almost the same taste.

As for the level of sweetness, honey is a bit sweeter than rice malt syrup.

You can choose honey in the same way as rice malt syrup both in drinks and desserts. It tastes awesome with pancakes, and baked goods and serves as a great sweetener for many dishes.

One of the biggest advantages of honey is that it’s organic and healthy. It comes with many vitamins and minerals our body seeks for.

Maple syrup is made of sap collected from maple trees. It is widely used with pancakes, and baked goods and serves as a good sweetener for drinks, desserts, and any other dish calling for a sweet ingredient.

Use 100% pure maple syrup to get its vitamins and minerals. Compared to rice malt syrup, maple syrup is sweeter just like honey. It carries a kind of earthy flavor.

Agave nectar is made of boiling sap of the agave plant the result of which is liquid syrup. It tastes sweeter than sugar and is similar to honey. You can consider it as the next alternative to rice malt syrup for baked dishes, drinks, and desserts.

Although agave nectar is a natural sweetener you should note that it’s highly processed and this is perhaps the only downside of this substitute.

Molasses is a viscous glaze-like syrup made from sugarcane and sugar beets. It comes in a dark color and tastes warm, sweet, and smokey. This sweetener is used in baked goods, desserts, and not only. It’s often added to barbeque sauces and is used in cooking too.

Molasses is rich in iron and high in minerals that make it a healthy natural sweetener. Compared to rice malt syrup, molasses may bring a little bitterness, so use it in smaller amounts to avoid this.

Made by heating dates in water, date syrup is sweet nectar, and rich in minerals and vitamins. It’s another natural sweetener that has a caramel and brown sugar flavor with a fruity hint. You can use it the same way as rice malt syrup.

Date syrup is popular, especially in Middle Eastern cuisines and if you have the chance to get it, then consider it as a perfect sweetener for pancakes, desserts, oatmeals, and even savory dishes such as French toast and grilled cheese sandwiches.

It pairs well with cake dough, baked dishes, muffins, butter squash, and even baked beans. It’s sweeter than rice malt syrup which means you need to use it in small amounts for the best taste.

Stevia is sold either ground or in liquid form. It doesn’t come with carbs and calories which makes it a great choice for people who are on diets and prefer a healthy lifestyle. It can be used to sweeten foods without adding the negative health effects that other sweeteners come with.

On the other hand, stevia is more expensive than sugar or other sweeteners. It’s also sweeter and sometimes comes with a bitter aftertaste but if you use it in smaller amounts the result will be satisfying.

Native to Asian cuisine, Korean rice syrup is usually available in Asian stores. If you can get it, then it’s an awesome replacer for rice malt syrup. It has the same texture and taste as rice malt syrup and you can use it in all dishes that require rice malt syrup.

Korean rice syrup is used as a glaze for desserts and in cooking. It also adds creaminess to cakes and pastries.

Both Korean rice syrup and rice malt syrup contain the same amount of sugars and calories but some think that Korean syrup is not as healthy as rice malt syrup because it’s highly processed.

One of the biggest advantages of maltose is that it’s fructose-free. While sugar contains both glucose and fructose, maltose comes only with glucose and tastes less sweet than table sugar.

Maltose is found in many plants and it’s made of the seeds and other parts of those plants that provide it a sweet taste. You can find it in a liquid form and use it to replace rice malt syrup in any dish. As for the texture, maltose syrup is more viscous than regular syrups.

And last but not least, you can use sugar in place of rice malt syrup as a sweetener. Of course, it won’t go with dishes that call for liquid sweeteners like rice malt syrup but you can add it to drinks and baked goods as an alternative sweetener.

Sugar takes the last place as it’s not considered the healthiest sweetener. It’s just the easiest substitute we usually have in our kitchen. You can use both white and brown sugar.

What is rice malt syrup good for?

Rice malt syrup is perfect for fructose-intolerant people and those following a healthy lifestyle. It’s often sold in wellness stores and can become a part of your diet.

It’s safe for the low FODMAP diet. However, you should make sure you buy 100% pure and organic rice malt syrup that doesn’t undergo high processing.

It’s also used as a vegan alternative to honey.

Yes, rice malt syrup is gluten-free and it’s safe for people who have gluten-related disorders like celiac.

The short answer is NO, it’s not safe for diabetics. It has a high glycemic index of 98.

Comparing different sweeteners we come to the concussion that you can easily substitute one sweetener with another if it comes with similar features. As for rice malt syrup substitutes, each of them has specific features you should consider before using.

We have tried to give all the necessary info about each sweetener, so that you can find the best one for your needs.