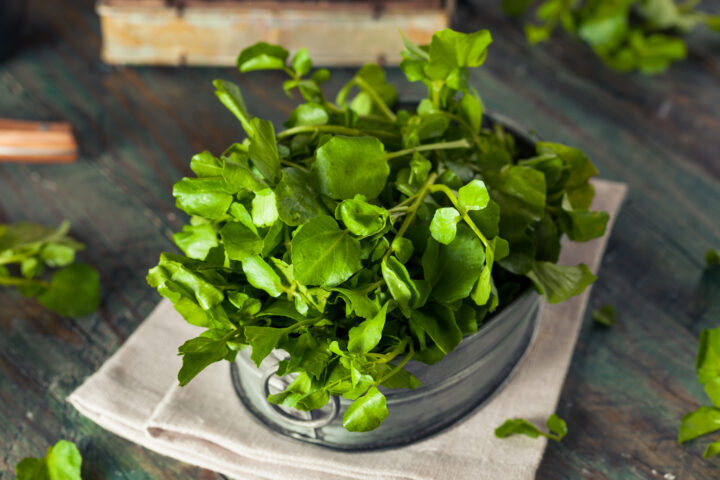 Watercress is a leafy vegetable coming from the cabbage family. You can eat it both raw and cooked. Raw watercress has a fresh, pungent, peppery flavor while cooked watercress tends to lose its flavor and become neutral.

It’s somehow similar to spinach but carries the taste of related veggies like mustard, cabbage, and wasabi.

Watercress is a seasonal vegetable and If it takes a special place in your recipe but you can’t find it then this list of watercress substitutes is made for you.

Arugula is leafy vegetable-like watercress only with more elongated and edgy leaves. They both are aquatic plants and belong to the same family. Arugula has a fresh, tart-spicy, peppery, and slightly bitter taste.

Arugula pairs well with pasta, pizzas, and soups. It brings a fresh and mustard-like flavor that’s a great addition to many dishes calling for watercress. Although arugula is not as crunchy as watercress, since its leaves are tougher, they can be used in stir-fries too.

If you want to try something new and the color doesn’t matter that much, lettuce can be your second good choice. There are both differences and similarities between watercress and lettuce.

Lettuce leaves are crunchier, tougher and come in light green-white color. The taste is similar to watercress: it’s fresh, slightly bitter, and mild in flavor with sweet undertones.

Lettuce is mainly used raw in salads and sandwiches but you can cook it in stir-fries for several minutes. It will remain crunchy and will complete the dish in place of the watercress.

Compared to regular cabbage, Chinese cabbage has subtler leaves and a milder taste. It carries the desired crunchiness as watercress and can be used to substitute it in sandwiches, salads, stir-fries, soups, stews, and many more.

Chinese cabbage doesn’t have bitterness and is softer, milder, and sweeter than regular cabbage. You can consider it for many Chinese dishes calling for watercress. Noodles pair well with it too.

Unlike many other seasonal greens, spinach is easier to find all year round. It is sold both fresh and frozen. So, if you can’t find watercress in any form, then use spinach instead. They come with many similar features. Spinach has a mild flavor and tastes good both raw and cooked.

You can pair it with pasta, salads, sandwiches, baked dishes, and soups as well as serve it on its own as a garnish or side dish.

Another annual leafy vegetable is nasturtium and you may find it in your grocery stores or markets. It has round-shaped subtle leaves and beautiful flowers, both of which are edible and taste mild-peppery like mustard.

Nasturtium leaves can be used to substitute watercress in any recipe calling for watercress including salads, vinaigrette, and cooked dishes.

You can use the flowers as a dressing. Avoid overcooking the leaves to keep their crunchiness. Note that nasturtium leaves are often served with fish, dried fruits, and cheese.

Endive is a leafy green native to the chicory plant family. Raw endive is crispy and bitter. It becomes subtle and mild when cooked and brings out a kind of nutty and mellow flavor. Compared to watercress it has tougher leaves that come in white. They are similar to lettuce.

You can use raw endive in place of watercress in salads and sandwiches and add it to soups, stews, braising, pasta, and grilled dishes. It may be a seasonal vegetable in some areas but if you see it all year round in your local stores then take this advantage and use it in many dishes to replace watercress.

Dandelion leaves are known for many health benefits and although they are bitter, they are widely used in salads. The taste is balanced with the help of seasonings and other flavors. They become milder in taste when cooked.

They look like arugula and you can use them instead of watercress in raw and cooked dishes including salads, sandwiches, soups, and stews. Compared to some other substitutes dandelion green can maintain its shape even in long-cooked dishes.

Kale is becoming more and more popular thanks to its health benefits. It’s a leafy vegetable with deep green color, and flat or ruffled leaves that are crunchier and stronger in flavor than watercress.

It is considered one of the healthiest veggies to use in salads, side dishes, breakfast casseroles, pizzas, and roasted and grilled dishes. If you can’t find other alternatives then you can find kale in many grocery stores and use it as a watercress substitute.

It withstands long cooking times and is more suitable for soups and stews rather than for salads. If you want to use it in salads and sandwiches then use it in a pinch to avoid an overpowering flavor.

Since radish sprouts are relative to watercress, they share similar features and you can use them instead of watercress. Radish sprouts taste like watercress with a little bit of spicy kick. Their leaves also look like the leaves of a watercress. They are used in salads, sandwiches, soups, and garnish.

The only downside of radish sprouts is that they are hard to find in common stores. However, you can grow it yourself and use it in many side dishes to complete the dish.

Here we offer an interesting alternative to watercress, and it’s radicchio. It’s a type of chicory with a bitter and spicy flavor when raw.

The bitterness disappears in cooked dishes but the strong flavor remains. So, it’s a good substitute to use in place of watercress both in raw and cooked dishes.

Thanks to its purple color, radicchio makes any dish more appealing. Radicchio has its special place in Italian cuisine. You can use it in many Italian dishes including pasta, salads, stews, sauteed dishes, and many more.

Last but not least, we have collard greens on our list as another leafy vegetable to use instead of watercress. Compared to watercress, collard greens have wider, larger, and tougher leaves that taste bitter when raw and become mellow and mild when cooked.

They are also crunchier in texture and stronger in flavor. If you cook them for short they will remain crunchy.

Collard greens are available all year round but they taste better, especially in cooler months.

You can use them stuffed or braised as well as in salads, casseroles, stir-fries, meaty braising and the like.

Can I substitute purslane for watercress?

Purslane is lemony and crunchy. It shares almost the same taste as watercress when raw. So, you can use it to substitute watercress in salads and sandwiches. However, you can sometimes use it on pizzas as well.

Who should not eat watercress?

Although watercress is included in the lists of healthiest veggies it’s still unsafe for children, especially for those younger than 4 years old.

It’s also dangerous for people who have health problems with the stomach or struggle with kidney disease.

Is it healthy to eat raw watercress?

Like many other vegetables, raw watercress is healthier and richer in vitamins and antioxidants. Thus, eating watercress is not only safe but also good for your health.

If you are after a healthy lifestyle then give priority to raw watercress rather than cooked one.