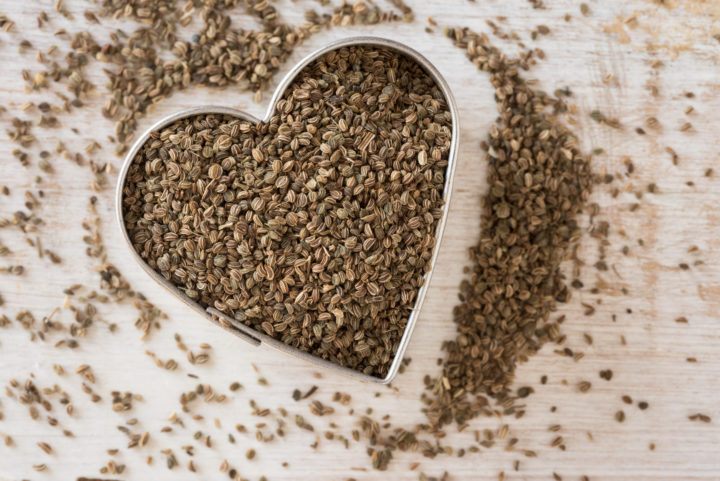 Celery seeds taste like celery stalks only a bit stronger and with a bitter taste. They have a wide usage in culinary as a condiment. These tiny seeds are meant to season pickling, barbeque dishes, roasted veggies, salads, sauces, soups and potato dishes.

You can use different forms of celery to replace celery seeds as well as other seeds and spices that come with a similar flavor. Some of them are less flavorful, in case you want something alike.

Both the leaves and the stalk of celery are edible and hold the same flavor. You can use them in versatile recipes to add that savory, earthy, slightly bitter and aromatic flavor of celery seeds.

They are used not only in cooked dishes like soups and stir-fries but also in salads and other raw meals as a topping.

Compared to celery seeds or its dried and powdered versions,  the usage of fresh celery is more versatile.

Dehydrated celery is the best way to have a celery substitution in your pantry. You can keep it for a long time and use it in the same recipes as celery seeds.

Dried celery is made of celery leaves and stalks, both of which can provide the desired taste to soups, stews, cooked dishes as well as salads and other side dishes.

As for celery powder, it is made of dried celery roots and stalks and comes with the same aroma and flavor as dried celery and celery seeds. It is basically meant for cooked meals, and you can add it to soups and stews.

You can find celery salt in stores from the spice section. It’s a mixed seasoning made of ground celery seeds and salt. It is used to add a celery flavor to savory dishes and you can safely choose it.

Keep in mind that this condiment contains salt and you should be careful when adding salt following your recipe.

Lovage is a herb with a celery-like flavor and taste with a stronger hint. It is sometimes referred to as fake celery, and in case you can’t find fresh celery to replace celery seeds, you can use lovage seeds, fresh lovage leaves or stalks instead. All of them are edible just like celery.

Caraway seeds are actually a type of seasoning made of the fruit of a plant related to parsley. It is used in many dishes as a spice and has a licorice-like and citrusy flavor which make it so aromatic. It is kind of sweet and savory at the same time.

This substitute works well in raw dishes and cold salads. You may need to go for a 1:1 ratio when choosing it as a celery seed alternative.

Another type of seed that technically is not a seed is dill. It is made of the whole fruits of the herb and looks like celery seeds. It tastes like caraway, only with a lighter flavor.

Dill seeds add an awesome flavor to pickles and brines, and wherever you don’t have celery seeds for this purpose, you can use dill seeds instead in equal amounts.

Made of the plant of fennel, fennel seeds is our next alternative to celery seeds. It belongs to the carrot family and has a strong licorice flavor with some sweetness. This seasoning is mainly used to add flavor to fish dishes, fish stock, soups, stews, salads and even cheese and bread dough.

You can use fennel seeds instead of celery seeds in many Italian dishes including pastas as well as in Indian and Greek dishes. It also goes well with pickles when used in place of celery seeds. Use it in a 1:1 ratio.

Parsley comes from the same family as celery. Compared to celery, fresh parsley has a milder and more delicate flavor. It is widely used in savory dishes including both hot and cold meals.

When it comes to replacing celery seeds, you can use parsley in stews and soups as well as in pickles. Just make sure to add it at the end of cooking when adding it to cooked dishes. Its peppery and slightly bitter taste mingled with a celery-like eartiness, make it a perfect substitute for celery seeds.

Coriander seeds have a warm aroma and slight sweetness. They are similar to celery seeds in terms of crunchy texture, strong fragrance and citrusy notes. However, these seeds are larger and have a round shape.

Yes they do carry some bitterness but mostly they are warm and have a pleasant aroma. So, the bitterness is a kind of earthy note in it that doesn’t make them inappropriate to use in cooking.

What are the side effects of celery seeds?

Mild allergic reactions such as skin inflammation may be caused by celery seeds. They are also considered to be unsafe for pregnant women. Hwveve, using them in proper qualities in cooking is normally safe.

Are celery seeds the same as ajwain?

Another name for celery seeds is ajmoda (in Indian), that’s why it’s sometimes confused with ajwain. However, ajwain is a seed-like fruit used in Indian cooking with spice blends.

It has a slightly bitter, herbal and flavorful combination of tastes like celery seeds, anise and oregano. Compared to ajwain celery seeds have a stronger flavor.

Some people love the strong flavor of celery seeds, some others can’t tolerate it. That’s why we have collected celery seeds substitutes for both groups of people. Find which one you need to enhance or to neutralize the flavor of your dish.