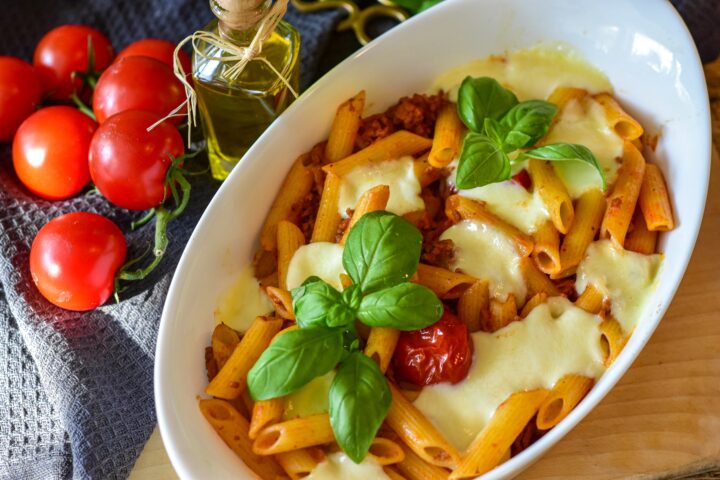 The 25 year-old model Gigi Hadid has posted an Instagram story where she was trying her own pasta recipe without vodka.

While many of her fans thought she didn’t want to use alcohol because she was pregnant, others believed that it was just because she didn’t have vodka in hand.

Whatever the reason, the recipe was a boom on Instagram and TikTok and now everyone wants to try Gigi Hadid pasta recipe.

And here we are going to share the most delicious recipes of this pasta dish with you with small changes in ingredients such as with or without vodka, spicy and non-spicy options, with or without half and half and different types of cheese etc.

If you want to try something new then keep on reading.

Let’s start with the recipe Gigi Hadid offered her followers.

First, saute onion and garlic in a pan with olive oil and tomato paste and mix it all well. Then add heavy cream and simmer it on low heat.

Next go with seasonings. Add basil, salt and pepper, chili flakes and cayenne pepper. Mix all well and pour the cooked pasta and pasta stock onto it.

Add butter and once it’s melted, add parmesan cheese. Turn off the heat and season with basil, chili flakes  and more parmesan before serving.

Besides the above mentioned ingredients, it contains vodka. You need to follow the same steps and add vodka after tomato paste.

The best part about this recipe is that it’s super creamy and delicious. The combination of heavy cream, vodka, butter and parmesan make it so “saucy”.

For this recipe you need all the ingredients without chili flakes. This is the non-spicy version of Gigi’s pasta and it’s perfect for those who don’t want to have extra-spiciness in the dish.

It already contains cayenne pepper and that’s enough for a bit of hotness.

According to this recipe you should add vodka after you see tomato paste has darkened a bit. When vodka is burnt off, you can add heavy cream.

If you wonder what type of onion you should use then note that Gigi uses red onion, but she tells you can use shallot too.

Many people choose to use vegetarian parmesan cheese instead of the animal-based parmesan and if you belong to this group of people then this recipe is right for you.

It contains all the rest of the ingredients besides dairy-parmesan. As for vodka, it’s a choice of taste. You can use it or replace it with a little bit of more pasta water. Vodka adds an acidic touch to the dish.

Compared to regular parmesan which is made of animal rennet, vegetarian parmesan contains vegetarian rennet. Special for those who want to try it the first time: it may be difficult to find in common grocery stores.

The well-known Penne alla vodka pasta calls for the similar ingredients as Gigi Hadid’s recipe and the main difference is the type of pasta. Penne alla vodka is made with penne pasta, while Gigi uses shell pasta, as mentioned above.

Penne alla vodka is often served with grilled chicken or grilled shrimp and it is one of the best Italian dinners you can make in just 30 minutes. As a dressing, you can also add parsley along with basil.

Penne arrabbiata is another easy pasta with similar ingredients as Gigi Hadid’s pasta. The sauce is made of spicy tomato sauce and seasonings.

It doesn’t include pasta water, vodka or heavy cream and the result is the bright red sauce in which the pasta is tossed.

It may not be as creamy as the previous recipes but it’s a good one for those who don’t want to use heavy cream, half and half or any other dairy product.

Instead of parmesan cheese, you can go for vegetarian parmesan and it will be fully-vegan pasta.

If we skip chili flakes and vodka in this recipe, we’ll get an awesome kid-friendly dish. Tomato paste is good for the vision and overall health of kids. Half and half is also considered as a healthy product for children.

As for seasonings, you can use a little bit of salt and cayenne pepper to maintain the original taste.

You can even find kids’ pasta sauce from grocery stores, but it’s better to make it yourself.

You can even add carrots, spinach, broccoli and other healthy veggies but if you want just Gigi’s recipe, then go ahead with tomato paste and the rest of safe ingredients for children.

8. Gigi Hadid Pasta With A little more garlic and burrata on top

This pasta recipe is pretty close to original Gigi Hadid pasta, excpet for that Kay, the creater of this recipe, added a little more garlic and burrata on top, which makes the result even better.

She said that Burrata is just like a food bandaid and make the overall result better. If you want to go some extra steps based on the orginal recipe and get ‘the best damn pasta around‘, then go visit her blog right now.

Do you want to try a totally different ingredient mix with the same result as Gigi Hadid’s pasta? Then this recipe is right for you.

Instead of dairy-butter you can use dairy-free butter. Instead of parmesan cheese you can use nutritional yeast and in place of heavy cream you can go for greek yogurt.

This combination provides a creamy pasta sauce which is flavored with salt, pepper and chili flakes.

Of course it includes olive oil, garlic, shallot and vodka like the classic recipe and the end dish tastes quite similar to the original one.