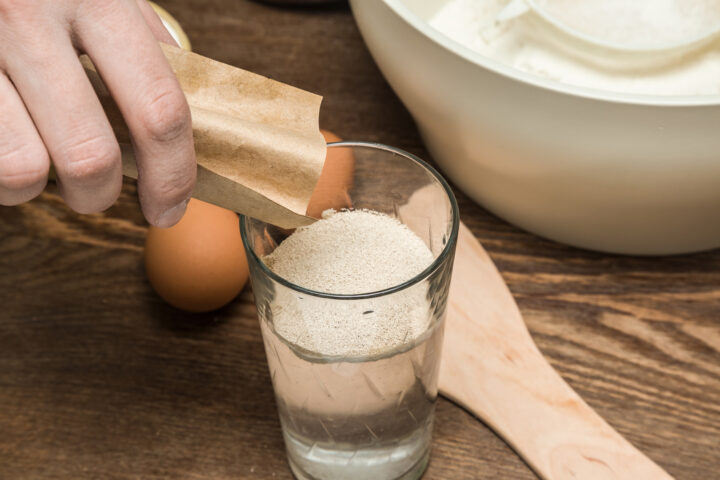 Baking often requires the use of yeast. If you enjoy baking, you’d usually go out and buy a packet (or few) of yeast for your baking needs.

Of course, yeast isn’t available in large containers, but is generally available in small packets. So, how much yeast is in a packet?

So, let’s get our answers on the types of yeast and the amount in a packet.

Types Of Yeast And How Much Is In A Packet

Given the versatility of yeast and its use in several eatables, there are several types of yeast employed in the cooking industry. Though commonly used, yeast doesn’t come in huge packets. Instead, you’ll usually find it in relatively small packets, often intended for quick use or 1-2 cooking sessions.

Types Of Yeast And Their Uses

There are four main types of yeast:

Of these, baker’s yeast is of particular note for its culinary uses. It too has several different varieties and types.

Types Of Baker’s Yeast And Its Packaging

This yeast doesn’t need additional activating or processing when you want to use it. You don’t even need to add water first – it’s possible to directly add this yeast to dry ingredients.

Instant dry yeast is fairly resilient and can handle 130°F of heat. It goes along with the cold as well. If frozen, it’s also good to store and can stay on for a few years.

There are a few types of instant dry yeast. These are:

Conventional package size for instant dry yeast and its variations is 7 grams (about ¼ oz).

Prior to use, active dry yeast should be added to warm water, ideally at 110°F. In some cases, it is recommended to add sugar to the warm water to help the yeast get to work faster.

However, this is dependent on different brands, so it’s a good idea to check the instructions on the package before you add sugar.

A generic packet of active dry yeast contains 7 grams (about ¼ oz) of yeast.

As opposed to dry yeast, cake yeast contains some moisture. This type of yeast is also known as we, fresh, or compressed yeast. Unlike dry yeast which is sold as dry granules, cake yeast is sold as a solid block.

This block is often called a “cake” of yeast, hence the name!

Fresh yeast is often the preferable choice for baking, because the yeast is, well, fresh! As a result, it works better and the baked goods come out better. The drawback here is that since it is moist, cake yeast has a much lower shelf life than dry yeast.

As such, it is more popular with professionals, commercial establishments, or people who do a lot of baking! In such cases, the better flavor of the baked goods is desirable. Besides, the smaller shelf life of yeast is not a problem since these places need a lot of yeast.

Before using fresh yeast, it’s recommended dissolving the required amount of yeast in warm water or milk. This helps make the flavor stronger and more intense.

What Is Yeast And How Does It Work?

Yeast is a living organism belonging to the fungi family. Scientifically, it is known as Saccharomyces cerevisiae. It finds use in making several foods, including breads, other baked goods, beer, and more.

Is Baking Yeast The Same As Baking Powder?

Sometimes, people confuse baking yeast and baking powder to be the same. Both of these cause dough to rise for baking and are often available as a powder, but they’re entirely different items.

While baking yeast is natural in origin, baking powder is produced through synthetic means and is a chemical mix. Producing baking powder involves the use of baking soda, cornstarch, and a few other ingredients.

How Does Yeast Work?

As it’s mixed with the dough, yeast gets into action eating (ingesting) the sugars in the dough. It converts these sugars to alcohol (ethanol) and carbon dioxide. Since the yeast is mixed fully into the dough, the carbon dioxide doesn’t get a space from which it can escape.

As a result, numerous small blocks of carbon dioxide form inside the dough. Since these small blocks take up some space, the dough increases in volume to accommodate the air inside it. This is what you see when you notice that the dough is rising.

When baked, the trapped air (carbon dioxide) in the dough expands with the heat, forming the bubbles (or holes) we see in baked goods.

Meanwhile the gluten in the dough helps it stretch and stay intact, thus forming the elastic net for the dough and keeping it all together.

With the discussion here, we know how much yeast is in a packet. Conventionally, a packet of yeast contains 7 grams of yeast, which is about a quarter oz. This is also equivalent to 2 ¼ teaspoons or ¾ tablespoons.

Most types of yeast packaging follow the volume (or weight measurement) listed here. Although, in the case of cake yeast, the average block weighs about 2 oz or 57 gram.