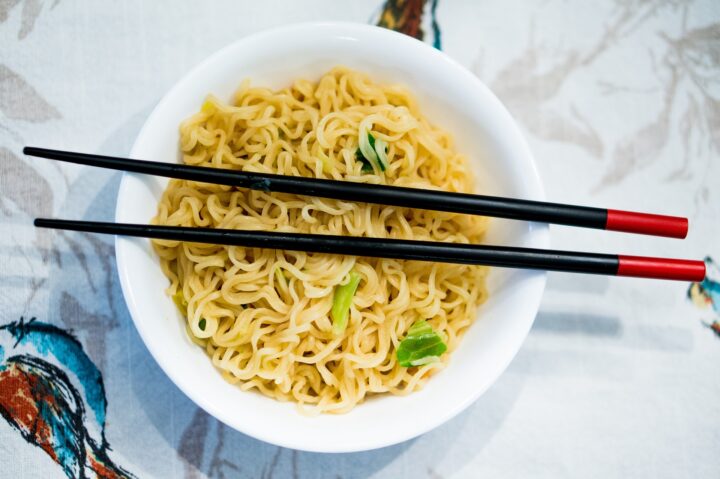 Instant noodles are one of the most loved comfort foods and also a very convenient instant food. While there are several companies offering these products, we put two of the best-known brands to test in this Maruchan vs Nissin comparison.

Both these companies have a long history of producing delicious instant noodles. Nissin is credited for inventing and bringing instant noodles to the market.

Maruchan too has a hold on the instant noodles market and offers several flavors to compete with Nissin.

So, is one of these objectively better than the other? Let’s find out!

Maruchan vs Nissin – Things You Should Know

Here are a few key differences that you can notice when preparing Nissin Top Ramen or Maruchan instant noodles.

These differences, while typical, are not exactly objective and may vary depending on specific flavors and regions, since both companies change their products to suit regional tastes.

In any case, here’s a quick look at the key differences

Some Quick Facts About Nissin And Instant Noodles

Nissin was the first to commercialize instant noodles. Founded in 1948, the company started selling instant noodles in 1958 and has seen an impressive growth in numbers.

Though there are hundreds (if not thousands) of other companies and varieties of instant noodles, Nissin continues to be amongst the biggest global players. This is a testament to its success and continued trust of the consumers.

The company also brought cup noodles to the market in 1971, which too have seen excellent success. Cup noodles are very similar to instant noodles, though easier and quicker to prepare.

What To Expect From Nissin’s Top Ramen Instant Noodles

Nissin’s instant noodles are sold under the label “Top Ramen”. The first instant noodles offered chicken flavor, though now there is a rather long list of flavors, including veggies, chicken, shrimp, beef, and more.

Conventionally, a pack of Top Ramen instant noodles contains a block of noodles and a packet with garnish. Whatever flavor you buy, the block of noodles is the same with flavoring coming from the garnish.

To be clear, there are some Top Ramen offerings where the noodle block is made from different materials, though in these cases the change is clearly mentioned on the packet. For a vast majority of noodles, it is the garnish packet that brings the flavors.

Here’s the recipe that’s usually recommended by the company to make one pack of Top Ramen instant noodles.

When cooking, you don’t want the noodles going too low on water as they might start sticking to the pot or burning. It’s good to leave a small amount of water in the noodles. This also helps the flavor of the noodles as the broth.

There are, of course, several other ways to cook the noodles depending on your personal preferences. Some people like to add the flavor/garnish packet before they add the noodles to the boiling water. Others add it right after putting in the noodles.

Top Ramen noodles typically have a rich flavor due to the garnish.

Nissin brought another innovation to the world of noodles in 1971, with Cup Noodles. Nissin’s cup noodles are sold under the label “Cup Noodles”. The name has become synonymous with the product.

Though many brands offer what we call “cup noodles”, they usually use another label. While cups are the most common option, this type of noodles or ramen are also available in other shapes, like bowls. Whatever form they take, the basics remain the same.

In cup noodles, the noodles and garnish are already mixed inside the cup. All you need to do is to add hot water.

Here’s how to make cup noodles.

About Maruchan And Maruchan Instant Noodles

Maruchan instant noodles are another top contender for the title of best ramen noodles. Maruchan is a Japanese company that was founded in 1977, though it has an equal presence in the USA.

These noodles are well-liked in the USA, Mexico, and Brazil, though they are available in several other countries as well. While they’re well-liked internationally, Maruchan has a relatively smaller global footprint when compared to Nissin.

The company is focused on value and flavor, so their product is often the cheapest option in the market.

Maruchan instant noodles are available in a variety of flavors. They also offer a good range of cup noodles.

Preparing a pack of Maruchan instant noodles follows pretty much the same process as Top Ramen. You add two cups of water to a pot and let it boil. Next, add the noodle block and let it cook until the water reduces.

Finally, mix the garnish with the instant noodles to get a wonderful meal.

Maruchan instant noodles tend to be lower in salt content and have relatively more veggies as compared to Nissin. Although, to be fair, the veggies don’t really make that big a difference, if any at all.

For the past few months, it has been tough to find Maruchan instant noodles in stores. This has led many people to believe that Maruchan was discontinued.

However, that’s not the truth. Due to the Covid-19 pandemic, the company witnessed a surge in demand and struggled to keep production up to match it.

This caused a temporary situation where the product shelves for Maruchan noodles in stores were empty and consumers wondered if the brand was discontinued!

It’s been a long time since then and much of the problems have been alleviated. Maruchan Instant Noodles are now easily available in most stores.

The Best Instant Noodles Worthy Of Your Palate

So, which instant noodle should you pick between Maruchan vs Nissin? Truly, the answer is, the one you find to your taste! The perceived differences between these two noodle brands are largely subjective.

So, choose whatever brand your heart desires, and you’ll enjoy the results!