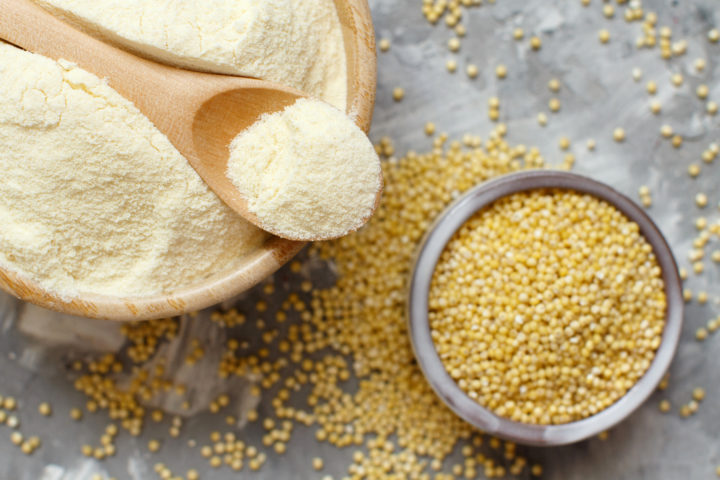 Millet flour is an ancient whole-grain flour. It is naturally gluten-free and is considered to be one of the healthiest flours. It is included in many diet-friendly and gluten-free recipes despite the interesting fact that it was mainly used as a birdseed.

Millet flour is basically used in bread recipes, pancakes, cakes, brownies, cookies, muffins and not only. There are many savory dishes such as veggie stews, pizzas and soups that call for this ingredient.

There are a few different options when it comes to substituting millet flour for other types of flour. In this post, we will round up a list of millet flour substitutes that you can easily find in your kitchen or grocery.

Sorghum flour is our first choice because it’s a type of millet flour and you can safely choose it instead of millet. Sorghum was mostly used in Africa but today it is popular all over Australia and Asia.

Its mild earthy flavor is so close to millet that you can use them interchangeably in most recipes. It works well both in baking and cooking.

You can choose it for sweet recipes such as cakes, muffins and other baked goods and you’ll get the desired texture and flavor. This flour is also a good choice for savory dishes and bread doughs.

As for quinoa, it comes with a slightly nutty taste and can be used in pastry. Compared to millet or sorghum, this flour comes with a higher price tag but if you have it in hand, you can use it in stir-fries and in most recipes that call for millet flour.

This flour is easy to find between the most popular gluten-free flours. It has a great demand in healthy diet recipes. You can also make bread, breakfast pancakes, cookies and cakes with it.

Actually, montina is a type of ancient grain. Montina flour is made of milled Indian ricegrass and it is higher in protein than many other types of flours. Nowadays it is widely used in North America.

This flour offers a mild flavor close to  millet flour. It can substitute millet flour in pizza doughs, bread doughs and other pastry. It tastes soft and tasty, especially in breads and pizzas. So, try once to see the difference between montina flour and other flours.

Buckwheat flour is another gluten-free flour included in healthy recipes. It has a strong flavor and a unique taste. It is widely used in Europe, United States and Asia.

You can choose buckwheat flour instead of millet flour in pancakes, noodles, breads as well as in savory dishes.

Since it comes with a stronger taste you may watch the amount when substituting it with millet flour, especially in pastry.

If you want to try another ancient flour that’s gluten-free and can substitute millet, then here is amaranth flour. It is popular in Africa, South America and China. This flour is a little bit sweet and has a nutty flavor.

There is a subtle difference between these two types of flours. You can use amaranth in pasta, waffles, baked goods and some savory dishes.

Although millet flour has more protein than rice flour, the latter one has a wider usage in Asian and Indian dishes. It is used to thicken soups and stews and not only. You can choose it as a good alternative for millet flour in cakes, biscuits and noodles.

Compared to white rice flour brown rice flour comes with a stronger nutty and earthy flavor. They both taste good in baked goods.

If your recipe calls for millet flour as a thickening agent, you can use potato flour or potato starch instead. Both work well in soups, stews and pastry. This is a great gluten-free product and quite versatile in cooking.

They come with a similar light texture as millet flour and provide the same result in baked goods, especially in cakes and muffins.

When choosing potato flour or potato starch for bakery, try to combine them with matching ingredients to achieve the desired result.

There are several types of chickpea flour but the most popular options to choose instead of millet flour are Kabuli and desi. They differ in color and texture but both can be used in the same recipes.

You can use chickpea flour in veggies burgers and meatballs as a binding ingredient as it sticks the rest of the ingredients quite well.

If you are looking for a millet flour replacer in sweet recipes, we offer using nut flours such as coconut flour or almond flour. They both taste nutty and hold little sweetness. You can choose them for cookies, sweets, baked goods and desserts where millet flour plays the main role.

As for coconut flour, it has a milky and slightly sweet taste which will be reflected in your dishes. However, it’s  not too strong and you can use it in savory dishes too.

Between gluten-free flours, soy flour has its special place. It comes with a toasty, nutty flavor similar to millet flour. Thanks to its light and powdery texture soy flour allows you to mix it with other types of flours for a better result.

Since it has a stronger aroma and darker color, you may choose it only for specific recipes where the color doesn’t matter and you don’t mind strong flavors.

Barley flour is an amazing substitute for millet flour but it doesn’t compliment diet-friendly recipes as it contains gluten. However, this flour is low in gluten and works well in baked goods, especially in cakes. It tends to make the dough so tender and subtle.

Barley flour tastes nutty. If you are not on a diet, then this can be your best choice. It can be used in a number of dishes including both sweet and savory recipes.

Another nutty-tasting flour to replace millet flour is bulgur flour. It is usually used in savory dishes but you may find some sweet recipes that call for it.

It can be used as a thickener in soups or stews. You can choose for meatballs, meat patties, pilafs, salads and vegan dishes.

Bulgur requires less time to be cooked than millet. So, consider this fact when substituting bulgur flour with millet flour.

All-purpose flour is perhaps the easiest substitute from this list. It is available everywhere and many of us use it in baking and cooking.

It works well instead of millet flour in almost all baking recipes. All-purpose flour is good as a thickener too for sauces and soups. Choose it for cakes, pancakes, cookies, pizza dough, muffins and any other bakery.

Sorghum flour is considered to be the best substitute for millet flour. Amaranth and quinoa flours take the second and third places.

Is millet flour good for health?

Yes, millet flour is nutritious and healthy. It contains B vitamins, iron, magnesium, manganese, copper, potassium and zinc. It is a great source of protein, antioxidants, and nutrients. Millet flour is good for the health of the heart and in managing blood sugar levels.

As a piece of advice I would like to say that mixing two different types of flours leads to a better result. It will also improve the nutritional level of your dish.

It’s usually recommended to use gluten-free flours, but since it’s easier to find flours with gluten you can safely use them as millet flour substitutes too.