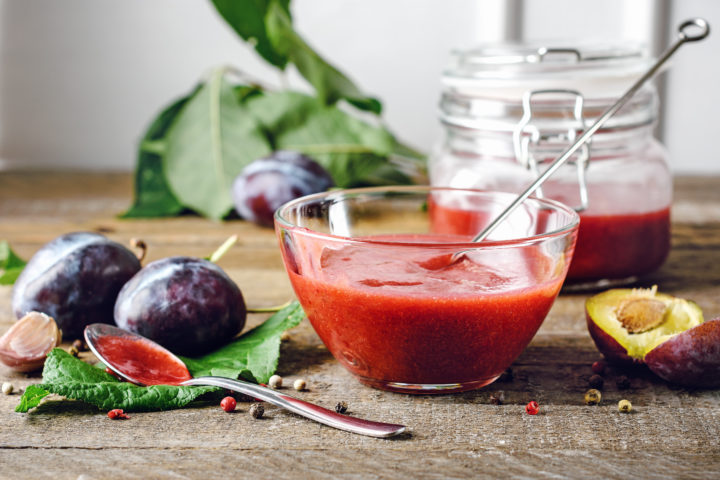 You often buy or make different sauces at home but when it comes to plum sauce, you realize that it’s something unique made with a traditional recipe.

And, yes, this sauce has a history, as it comes from the old Chinese cuisine and has become a favorite sauce in many other cuisines and restaurants.

Plum sauce is made of sweet plums, garlic, chili, vinegar, salt and sugar. It tastes sweet, spicy and sour at the same time and is paired with roasted pork and poultry, spring rolls, dip-fried dishes, dumplings, seafood, noodles and roast duck.

If you have tried this sauce once, then you may love to make it at home or replace it with something else.

It’s not a big deal to make plum sauce at home, and if you don’t want to leave the house for another jar of sauce or substitute, then take a quick look at your pantry to see whether you have the ingredients for plum sauce.

Half teaspoon of ground ginger

Now, you need to pour all the ingredients into a saucepan and cook it over medium heat for about 20 minutes until it starts boiling.

Don’t forget to simmer the mixture while cooking to get a smooth blend. Let it cool, pour into an airtight jar and store in the fridge. You can use it for up to 2 weeks.

Made of soy sauce, mirin, sugar, and sake, teriyaki sauce tastes sweet and tangy with some saltiness. This combination of ingredients makes it a good substitute for plum sauce.

If you want to have a spicier result, you can go for the garlic teriyaki sauce or add some spicy seasonings into it. In order to thicken it a little bit, you can also add cornstarch. This way, you’ll get a dipping sauce.

Use teriyaki sauce instead of plum sauce with meats including pork, chicken, beef and fish. Consider it as a dipping sauce for dumplings, chicken wings, steak and shrimp. Teriyaki sauce makes a good match with stir-fries, vegetables and rice dishes too.

Another popular sauce originating from Asian cuisine is ponzu sauce. It comes from Japan and is known as a dipping sauce for dumplings, noodles, tempura and other Asian dishes.

Ponzu sauce is made of soy sauce or tamari, mirin, sugar, citrus juice, bonito flakes, kelp and rice vinegar. It has a similar sweet and savory taste as plum sauce and you can use it instead of plum sauce in many dishes including meats and fish.

Although the main ingredient in hoisin sauce is fermented soybean paste, it allows you to add different seasonings to reach the desired taste. This means that you have the opportunity to make another sauce close to plum sauce.

If the store-bought hoisin sauce seems to be spicier for you, you can add spices according to your taste. Go for vinegar, garlic, a little bit of red chilies and fennel seeds to create a richer flavor.

This sauce serves as a glaze for meat, marinade for Peking duck,  adds flavor to rice and stir-fries. You can use it as a dipping sauce too.

An easy alternative to plum sauce is sweet and sour sauce which is available in almost all grocery stores. It is made of pineapple juice, brown sugar, vinegar, cornstarch, ketchup and soy sauce.

This combination of seasonings and condiments makes it taste sweet and sour at the same time. If you want to add some spiciness, you can add a hot seasoning according to your preferences.

It is widely used to glaze meat, add flavor to chicken, pork, shrimp, noodles, rice, seafood, stir-fries and the like. You can also use it on salads as a topping.

Of course, it’s better to use this sauce as a marinade or glaze for meat but you can add it to noodles, ramen soups, stir fries and use it as a dipping sauce for rice dishes and dumplings.

Oyster sauce may become one of your favorites as a plum sauce replacer. The main ingredients of this sauce are oyster juice or oyster extract, soy sauce and sugar but some of its store-bought varieties may also contain soy sauce and cornstarch.

It is salty and sweet at the same time and if you like, you can make it a bit spicy by accompanying seasonings. You can use it with seafood, noodles, stir-fries and many Chinese-American meals.

Special for vegetarians who think they should skip this substitute, I am here to tell you that there is a vegetarian version of it too in which mushrooms are used instead of oyster juice or oyster extract.

And at last but least, we have another easy homemade substitute for plum sauce and it’s the thick mixture of garlic, miso and raisins. Miso is a paste made of fermented soybeans and barley or rice malt. It is mostly used in Japanese cuisine.

The main advantages of this combination is that raisins have a similar taste to plums, garlic adds spiciness and miso provides a sweet-savory taste and a sauce-like appearance.

You can also add sesame oil, ground red pepper and mustard for a hotter and stronger flavor.

Is plum sauce the same as duck sauce?

Since plum sauce is the irreplaceable part of the many Chinese duck dishes, it is sometimes referred to as duck sauce. So, we can say they are the same.

Yes, plum sauce is gluten-free. However, check the label before buying to make sure the chosen option doesn’t contain wheat or gluten.

Plum sauce can stay fresh up to 1 year if you keep it in the refrigerator. After a year it expires.

Despite the fact that plum sauce is one of a special condiment in its taste and flavor there are reminsinste sauces that can be used to replace it and now you know which they are. Perhaps the most important thing to pay attention to is the slight sourness the substitute should have.