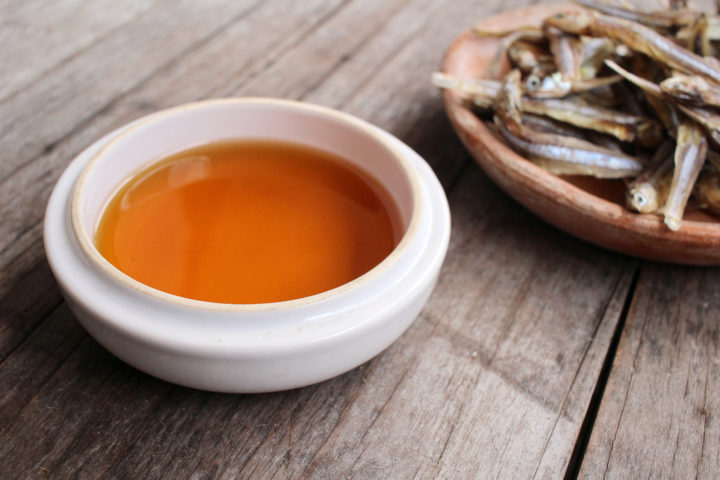 Fish sauce is a liquid seasoning made of small fish called anchovies. It undergoes a fermentation process with the addition of salt in the marinade for about 1-2 years.

It is used in many cuisines including Southeast Asian, Filipino, Vietnamese and Thai. They use this sauce the same way as soy sauce in Chinese dishes.

If it’s not available in your region or you want to know a vegetarian substitute for fish sauce then stay with us. We’ll also find an answer to the question whether there are substitutes for fish sauce in pad thai or not.

Oyster sauce is our number one choice because it’s another seafood-based sauce with a similar fishy and umami flavor. It is basically made of oysters, water salt, sugar, corn starch, wheat flour, and caramel color.

There are also vegan options made of the same ingredients only without oysters.

You can use oyster sauce instead of fish sauce in stir-fries, marinades and fried rice. It tastes both sweet and salty like fish sauce.

Note that this sauce is thicker in texture but you can dilute it with water to use in other dishes that call for the thin texture of fish sauce.

Since fish sauce is made of anchovies, you can use this fish along with soy sauce to replace fish sauce for many cases.

Add a few finely chopped anchovies to 1 tablespoon of soy sauce to substitute 1 tablespoon of fish sauce. You can add it to curries, stir-fries and some other dishes that you think it’s suitable for.

In order to maintain the desired fishy and savory taste in the dish, you can also refer to fish broth. You can either make it at home or get it from grocery stores in a canned version. This one works well especially for soups and stews.

Keep in mind that fish broth comes with a milder and less saltier flavor, so you need to enhance its taste with some salt and other matching condiments.

Worcestershire sauce is rich and flavorful condiment made of vinegar, tamarind, anchovies, molasses, onion, garlic, and other seasonings. It is used in stocks, salads, shrimp cocktail sauces, and grilled, steamed or stir-fried vegetables.

Due to tamarind it has some acidity but overall this sauce is savory, sweet and salty. And the sourness doesn’t ruin the taste, moreover: it makes it more suitable as a fish sauce substitute because fish sauce is often served with lime juice.

You can easily find vegan fish sauce from grocery stores in bottles just like fish sauce. It is basically made of soy sauce, tamari, dried mushrooms, seaweed and garlic.

It has the similar level of saltiness as fish sauce and comes with almost the same color. You can use it the same way and in the same ratios in your favorite vegan dishes.

Instead of Thai fish sauce you can use Thai Thin soy sauce which has a reminisnet flavor and taste to fish sauce. This sauce is made of soybean, wheat, salt, sugar, and food coloring.  It is the equivalent of the Chinese light soy sauce.

It comes with a savory and salty flavor and best goes with fried rice, noodles, stir-fried dishes and many other meals that call for fish sauce. It’s also known as wite soy sauce.

You can use it as another vegan-friendly alternative to fish sauce in cooked dishes, with noodles and veggies.

Note that Japanese white soy sauce is saltier than regular soy sauce but it’s lighter and subtler in taste than dark soy sauces.

If you have soy sauce and lime at hand, then there is no need to look for another quick substitute.

Soy sauce mixed with lime juice provides a similar flavor as fish sauce combined with a sour ingredient. You can use it in both cold and hot dishes for the same amount as fish sauce.

Another easy blend is soy sauce with rice vinegar. It works the same way as the previous option and provides the desired level of sour freshness for the dish.

Mix half cup soy sauce with half cup of vinegar to replace a half cup of fish sauce. This is a good condiment especially for marinades.

Compared to fish sauce, soy sauce is darker but the taste is remisenest in the final dish.

Looking for an appropriate vegan substitute for soups? What about mushroom broth and soy sauce combination? This works well in many cooked dishes and salads.

You need to simmer mushrooms in water and add soy sauce. Then use this broth in a 2:1 ratio in soups, stews and other cooked dishes.

It sounds weird, but yes coconut aminos work instead of fish sauce. The main ingredient in this sauce is the sap of the coconut plant and the final result is quite similar to soy sauce.

So, if you don’t want to use soy sauce but still are in search of a vegan alternative to fish sauce, then go ahead with coconut aminos.

It has a salty umami flavor and is used in soups, sauces, salads and with vegetable dishes, rice, noodles, meat and seafood. You can also use it as a dipping sauce for a number of dishes.

Known as a vegan and gluten-free product, tamari is a soy-sauce-like condiment popular in Japanese cuisine.

It is made of organic soybeans, organic alcohol, water and salt. It doesn’t contain wheat, that’s why it’s one of the most suitable options for people who avoid gluten.

Tamari sauce has a rich umami and savory flavor like soy sauce and can be used to substitute fish sauce in marinades or as a dipping sauce. Compared to soy sauce  it’s thicker in texture and less salty.

Seaweed is one of the most common replacers for seafood-based dishes and condiments in vegan recipes. Being a marine plant it holds a savory, umami and heavily salty taste that’s quite similar to the taste of fish sauce.

Seaweed, on the other hand, is one of the healthiest foods full of calories compared to some types of seafood and  fish.

What is the taste and smell of fish sauce?

Fish sauce has a kind of complex taste with a fishy and salty flavor combined with caramel-y sweetness.

Where can I use fish sauce?

It is used in a number of dishes including both cold and hot meals. You can add it to salads, stews, soups, stir-fries, grilled veggies and seafood as well as use it as a dipping sauce.

What are the best substitutes for fish sauce in Pad Thai?

You can use soy sauce + oyster sauce, soy sauce + tamari, soy sauce +dry sherry.  You may also add lime juice, sugar, salt, ginger or garlic powder according to your taste.

Should fish sauce be refrigerated?

We hope you have found the best substitute for your recipes and now you know how to maintain the desired fishy taste in dishes that call for fish sauce. Some of the options offer unique tastes, so share your opinion with us when trying any of them.