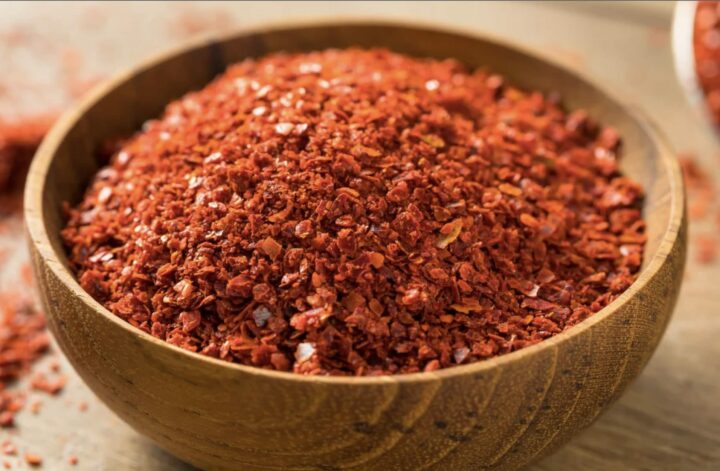 Gochugaru, also known as Korean chili powder, is a type of crushed chili pepper popular in Korean cuisine. Gochugaru is made of de-seeded, sun-dried peppers that are crushed into a powder.

Its spice level varies from mild to hot and the flavor is smoky, spicy, and sweet at the same time. It also carries slight fruity notes and depending on the level of spiciness the color ranges from deep red to light brown. It is used in cold salads, kimchi, soups, stews, and many more.

If you have run out of it, then use one of the gochugaru substitutes mentioned in this post. Luckily there are a number of other condiments that offer the same level of spiciness and come with a similar color and flavor.

Guajillo is a Mexican chili the powder of which is used as a red spicy condiment in sauces, salsas, chili, soups, and stews. Its heat level is mild and it’s quite similar to gochugaru. You can find it in many Mexican stores as it’s widely used in Mexican and Southwestern cuisines.

Dry guajillos are usually smoked and then crushed into flakes or powders. So, they also carry a smoky hint which brings them closer to gochugaru powder.

Chipotle powder is made of dried and smoked jalapenos and it’s more popular than the previous option. You can easily find it in the spice section and use it in place of gochugaru. Chipotle powder is mildly spicy that adds a pleasant depth to the dish without overpowering it.

Compared to gochugaru, chipotle powder comes with more smokiness, and although the heat level is the same you should use it in smaller quantities to avoid that strong flavor.

It also stands closer to gochugaru in terms of color and texture. The difference is the heat level and since cayenne pepper is 3-8 times hotter than gochugaru, you may reduce the amount for your recipes.

If you are familiar with Syrian cuisine then perhaps you have heard about Aleppo pepper flakes. It’s made of Halaby chile peppers and unlike some other types of chili, it’s milder, with fruity and tangy notes.

This vibrant red pepper is used in chicken marinades, with roasted vegetables, or used as a salad dressing. It’s even used in cocktails thanks to its pleasant and mild spicy kick and fruity touch.

You may find Aleppo pepper flakes in several varieties from eastern stores and you should choose the best option according to your taste and recipe. It pairs well with salt and vinegar and you can use it with many dishes calling for gochugaru.

Chile pasilla or chile negro is a dried chili pepper made of chilaca chiles that are naturally green in color but becomes dark brown when dried and smoked. It comes from Mexican cuisine and is considered a mild variety of chili.

Pasilla de Oaxaca chiles are a variety of smoked pasilla chilies. It’s mainly used with Mexican dishes and sauces but since it has a similar flavor to gochugaru, you can use it instead. It’s milder than gochugaru and you can add it according to your preferences.

Fish pepper is a small chili pepper variety native to African-American continents. It’s something between serrano and cayenne pepper in terms of taste and it’s called fish pepper because it was mainly used with seafood.

It’s another great substitute to use in place of gochugaru if you want to add it to a Korean-style seafood dish or something related. It’s milder than gochugaru and you can add more if you like more spiciness.

Sandia chile is native to New Mexico and is used in salsas and salads. It comes with the same heat as gochugaru and seems to be another good option to try instead. You can purchase its powdered form, to use the same way as gochugaru.

It is either red or green and depending on that the color of the powder may vary. This pepper pairs well with chicken, and stews and is often used as a topping for watermelon. The fresh one goes well with salads.

As for Indian chili powder, it’s made of ground dry chili peppers and is used in Indian cuisine as a condiment for meats and poultry as well as a seasoning for marinades, dry preparations, and fillings. It’s bright red, extra-hot, like Thai pepper, and has a strong flavor.

So, you need to use it in small amounts when replacing it with gochugaru. However, it also carries some sweetness which breaks down the spicy kick. You can find this spice in Indian stores.

Chile de Arbol is an extremely hot powder but it’s affordable and easy to find. So, using it in a pinch will give you the heat you want for your dish. It’s a Mexican chili pepper vibrant red in color and smoky in flavor with earthy and nutty notes.

You can use chile de Arbol powder in any dish calling for a bit of spiciness. The amount you use depends on your taste but be careful with it because it’s too hot compared to gochugaru.

Perhaps the easiest alternative to gochugaru is crushed red pepper and if you have it in hand, use it in small amounts to replace gochugaru. It is made of cayenne pepper and comes with a higher heat level.

It has a similar consistency and color as gochugaru and can be used instead of it in almost all dishes. Just make sure you start with smaller quantities than you have in your recipe.

The final substitute is as easy as the previous one. Paprika is a common spice in our seasoning rack and it’s made of dried and ground red peppers that vary from mild, and sweet to hot.

Opt for the smoked one to replace gochugaru as it’s made of hot chili peppers and offers not only heat but also the smoky flavor that you may look for in a gochugaru substitute.

And there is one different substitute in our list called gochujang. It’s a thick and spicy paste made of red chile pepper flakes, fermented soybeans, sticky rice, and salt. It comes from Korean cuisine and is used in meat marinades, stews, soups, and with many Korean dishes. It is also served as a dip.

Gochujang is widely used with Korean dishes and tastes mild to moderately hot. You can find it in Asian stores but make sure it suits your dish because it’s a paste and you can’t use it the same way as powdered condiments.

What’s the texture of gochugaru?

The texture of gochugaru lies between powder and flakes. Let’s say it’s a flaky powder with a coarse texture and feels like crushed red pepper flakes.

How long can you keep gochugaru?

Hot spices tend to lose their heat and power over time and gochugaru is not an exception. If you store an open pack of gochugaru properly it will last up to 6 months.

How spicy is gochugaru?

It’s similar to crushed red peppers and jalapenos in its level of heat. Compared to jalapenos and red peppers, gochugaru offers a more complex and deep flavor with smoky and fruity hints and that is what makes it special.

Every cuisine has its special spices and seasonings but red and hot spices are found everywhere. So, in case you can’t find gochugaru there is no need to worry because plenty of other gochugaru substitutes will surely save your dish and provide it with the same heat, warmth, smoky flavor, and bright red color.

Many of the alternatives mentioned in this article are easy to find and we hope you have at least one of them in your kitchen to use it in the recipe you want.