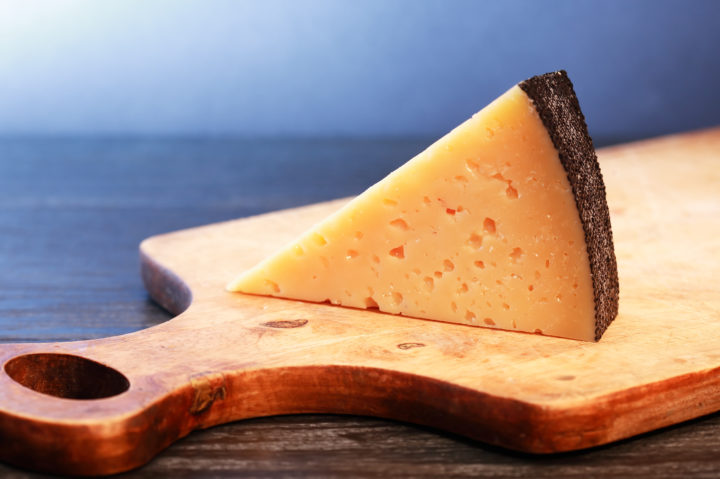 Gruyere is an Alpine smooth, melting type cheese with Swiss origin. It is made of whole cow’s milk and is usually aged for about six months or even more. It has a mild, sweet and slightly salty flavor but in most cases the taste varies with age.

Gruyere is one of the most popular types of cheese used in fondue, quiche recipes, French onion soup, French toasted ham and cheese sandwiches and not only. Since it has a melting nature, you can see gruyere cheese in many baking recipes.

Emmental is another Swiss cheese, that’s why it has many similarities with gruyere cheese. It’s a yellow, medium-hard cheese with a slightly sweet and mild buttery flavor. This cheese also has a strong aroma and comes with medium holes like many other Swiss cheese.

The aging time of emmental is between 2 to 18 months and depending on how long it was aged it may come either with light or strong flavor.

Since the same bacteria is used in the process of maturation as in the case of gruyere cheese, you can safely choose emmental cheese to substitute gruyere, especially in fondue.

Originating from Norway, jarlsberg cheese has a mild, nutty and slightly sweet flavor similar to gruyere cheese. Due to its production process, this cheese has similar holes to several types of Swiss cheese. It is a semi-soft cheese with a medium-hard outer layer and buttery texture.

It’s easier to get Jarslberg cheese compared to gruyere cheese, and you can use it in recipes that call for gruyere. Compared to the previous substitute, this one also has a milder sweetness and goes not only with sweet but also with savory dishes.

Make sure you cut off the rind before adding to cooked dishes.

If appenzeller is available in your stores, you can choose it instead of gruyere too. This is another Swiss cheese with a rich and complex taste. It is usually described as robust, savory and herbal cheese with grassy and flowery notes mingled into mineral touches.

Overall, older gruyere cheese is quite close to appenzeller in taste. However, appenzeller has a richer flavor but it doesn’t forbid you to use it instead of gruyere in almost all recipes.

Compared to gruyere, which is a hard cheese, raclette is semi-hard but it tends to melt in cooked dishes.

Compared to other types of cheese, maasdam ripens faster: in about 4 weeks. It is the Dutch version of emmental cheese and is a good substitute for gruyere.

Maasdam cheese has a smooth shell, waxed yellow color and is semi-firm inside. It has a creamy texture and tastes sweet, nutty and buttery with fruity undertones.

Comté is a semi-hard cheese originating from France. Depending on the aging  time it can vary in color but basically it’s pale yellow. Aged comté cheese has a nutty, smoky, sweet and fruity taste.

If you choose comté cheese instead of gruyere for savory dishes, opt for aged versions. Usually comté is considered as the French version of gruyere as they are quite similar in taste and appearance.

Edam cheese comes from the Netherlands and is yellow inside and red outside. It’s a semi-hard cheese and is used in baking with pastas and other dishes as a melting cheese. So, you can use it in place of gruyere in fondue and other meals.

Butter, meaty and caramel with herbal and flowery notes: this is how beaufort cheese is described. It is firm and has a hard smooth texture. It is aged for 16-18 months and comes with holes.

You can use beaufort cheese melted in cooked and baked dishes. It has a creamy and elastic nature at the same time when melted.

Le Brouere is another French cheese to use instead of gruyere. It has a similar appearance to gruyere and tastes earthy nutty just like aged gruyere.

It will provide your baked dishes and cooked meals with creaminess and the same texture as gruyere. It’s considered as another variant of gruyere and you may hardly notice a difference in flavor when substituting it with gruyere.

Several types of Italian cheese can also play the role of gruyere in many dishes. One of them is fontina cheese. It has a nutty and buttery taste with earthy touches. The main difference is in the flavor: while gruyere comes with a more pungent flavor, fontina tastes milder.

Another little difference is in the texture as gruyere is firm from the start of the aging process, while fontina is semi-firm and becomes harder by the time. Depending on your recipe, you can make your choice between hard and semi-hard fontina cheese.

As for graviera, it is made of goat’s milk unlike gruyere which is made of cow’s milk. However, they have similar features and if you have this cheese in hand you can consider it as gruyere’s relative from Greece.

It’s a hard yellow cheese with buttery, sweet and slightly nutty flavor. You may notice fruity undertones and  burnt caramel taste which make it unique. Longer-aged graviera has a stronger nuttiness.

If you are looking for an easy substitute for gruyere then choose the Irish dubliner cheese. It is available in common grocery stores and offers similar features as gruyere. It has a nutty and sweet taste and you can find it both in soft and hard versions. This makes your choice even easier.

If you want it just for serving with other cheese and matching foods, then go for hard options. if it’s meant for bakery and cooking, then use the soft one which will melt and provide the best result.

Special for those looking for an affordable substitute for gruyere in fondue, there is the wensleydale cheese. When melted, it provides a similar flavor to gruyere. So, you can use it in cooked dishes and in baking.

You will get a putty, sweet and sometimes even a honey aftertaste. This cheese has a firm rend yet not too hard and comes with a creamy texture.

In case, neither of the above-offered cheese is available in your stores, you can still use swiss cheese instead of gruyere. Although it’s called swiss cheese, it is made in America and you can easily get it from stores.

It’s an alpine-style cheese inspired by the tasty types of real Swiss cheese and has the nutty taste of gruyere which make it a good substitute.

You can use ricotta cheese instead of gruyere in mac and cheese, desserts, cakes, lasagna, savory pastries and salads. It is made of cow’s or sheep’s milk and is a good option to consider for sandwiches too.

Ricotta goes well with sauces and creams that you can combine with fish, meats, pasta, poultry, vegetables and even poultry. It melts well and tastes awesome in baked goods too.

What is gruyere cheese?

Gruyere cheese is a type of Swiss cheese that is named after the town of Gruyeres in Switzerland. It is made from cow’s milk and has a golden color with a slightly nutty flavor.

The texture of the cheese is firm and creamy, and it melts well. Gruyere cheese is commonly used in dishes such as quiche, gratins, and fondue. It can also be enjoyed on its own as a snack or appetizer.

Where to buy gruyere cheese?

If you’re looking for gruyere cheese, your best bet is to head to a specialty cheese shop or an upscale grocery store. However, you can also purchase it online from a variety of retailers, like Amazon and Walmart.

Yes, Gruyere is a variety of Swiss cheese named after the Gruyeres town in Switzerland.

Gruyere cheese is a delicious, nutty-tasting cheese that can be used in many dishes. However, if you’re looking for a Gruyere cheese substitute, there are several options to choose from.

In this post, we’ve outlined some of the best substitutes for Gruyere cheese. So whether you’re cooking up a dish for a special occasion or just want something different on your plate, try them out!