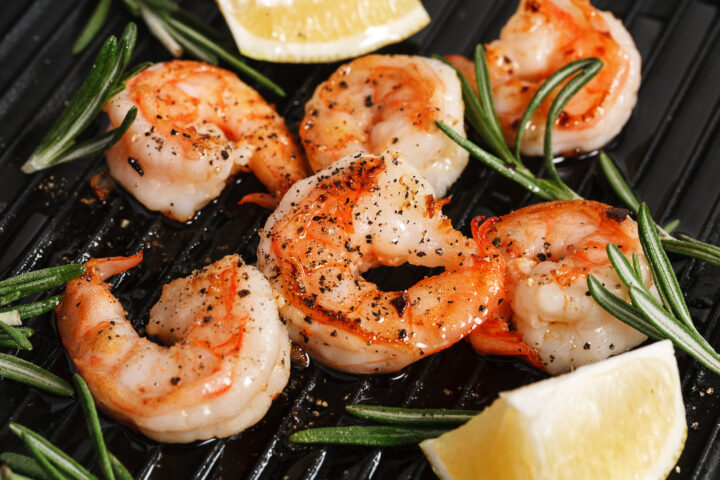 While cooking anything, it’s important to make sure that the food isn’t undercooked or overcooked. It’s even more important when working with animal meat or seafood.

If overcooked, it won’t taste right, but if undercooked, you risk the threat of food poisoning or worse.

So, it’s important to have seafood like shrimp cooked right. So, how to tell if shrimp is cooked or whether you should continue cooking it? There are a few indicators that can help you make that decision.

However, it’s not a one size fits all type of situation. After all, shrimp is an incredibly versatile food and there are several ways to cook it. Plus, countless recipes use shrimp, so simple visual indicators won’t always work.

So, here are a few ways and indicators that make it evident when shrimp is cooked.

Signs That Shrimp Is Cooked And Safe To Eat

Start With The Color

Uncooked or raw shrimp has a gray color with some translucence. Before you begin cooking, take a good look at the shrimp and see what it looks like. A baseline at the start will come in handy throughout the cooking process.

As the shrimp cooks, the gray and translucent color goes away. A cooked shrimp is white with some pink dots. At this point, it should also be solid without any translucent patches. If there’s an abnormality, it means the shrimp isn’t cooked.

The Texture Has Some Answers

Along with the color, the texture of shrimp changes too during cooking. Undercooked shrimp is somewhat fleshy. It won’t be as pliable as raw shrimp, but the fleshy feel will stay.

Similarly, if the shrimp is overcooked, it takes on a tough texture that’s difficult to chew. When cooked right, the shrimp’s texture falls between these two extremes.

A quick test of this is to take a fork (or use your finger if the shrimp isn’t too hot) and gently press on the shrimp.

Undercooked shrimp will feel spongy and bounce back after being pressed. Once cooked, the shrimp will have some give and won’t feel as spongy.

As a rule of thumb, the longer you cook the shrimp, the tighter and tougher they get. As the shrimp cooks, it will change its shape, texture, and color. A combination of these is a good indicator of letting you know when the shrimp is cooked.

Look At The Shape Of The Shrimp

There is a noticeable difference in the shape of fresh, cooked, and overcooked shrimp. Fresh shrimp will appear relatively straighter than those being cooked. This is especially true if you’re cooking with the shell removed.

You’ll find gray, raw shrimp to be more flexible without their shell. Once cooked, they take on a shape resembling the letter “C”.

Once this shape is formed, matched together with the color and texture, you can be reasonably certain that the shrimp is cooked.

The shape also makes it clear when the shrimp is overcooked. In such a case, the overcooked shrimp will have more of an “O” shape. So, keep an eye on the shape the shrimp takes while cooking to have a good idea of what to expect.

What Does The Temperature Have To Say?

Visual and texture examinations can give you a good idea of whether the shrimp is cooked. Yet, let’s not ignore scientific and statistical methods!

Whether you’re cooking meat or seafood, keeping an eye on the internal temperature of the food is a great way to know if it is cooked and ready to eat. Something like a probe thermometer should do this job rather easily.

If you’re fond of cooking meats and seafood, having an internal or probe thermometer is a sensible choice. Checking for the right temperature doesn’t just let you know if the food is at the right cooking temperature.

This food is quite easy to overcook and tends to get overcooked when heated to this temperature. So, for shrimp, the FDA recommendations are okay with the temperature of cooked shrimp being 120°F. Thankfully, shrimp is safe to eat at this temperature.

How To Cook Shrimp

Shrimp is a versatile food and there are countless methods for preparing it. The one listed here is a simple and quick way to cook shrimp. As you cook, remember to take note of the properties listed above.

Getting the taste, texture, and color right will go a long way to ensuring that the shrimp is cooked right. It might also help to keep a probe thermometer around to check the internal temperature of the shrimp.

Here’s what you need.

Start with putting the skillet on medium heat and add the oil. Once the oil is hot, add the shrimp.

Remember that shrimp are quick to cook. In about 2 minutes, you should see them changing color to a light pink. At this point, you can add the other ingredients (except parsley) for seasoning.

Cook for another minute, while keeping an eye on the color and shape of the shrimp. This time will also help the seasoning to better settle into the food and for the garlic to cook and give up its smell.

After this time, remove the shrimp from heat and add some parsley. Mix it with the rice (or pasta). The shrimp is ready to serve!

There are simple and straightforward ways for how to tell if shrimp is cooked. There are clear indications in color, texture, and shape that show when this food is cooked.

Additionally, for those who want to be sure, getting a probe thermometer is a good idea. It can check the internal temperature of the shrimp and confirm if it’s cooked.

Shrimp is fairly quick to cook. Usually, it takes just 2-3 minutes for it to be ready. With a timeframe this small, it’s important to learn and understand when the shrimp is undercooked, overcooked, or if it’s done just right!