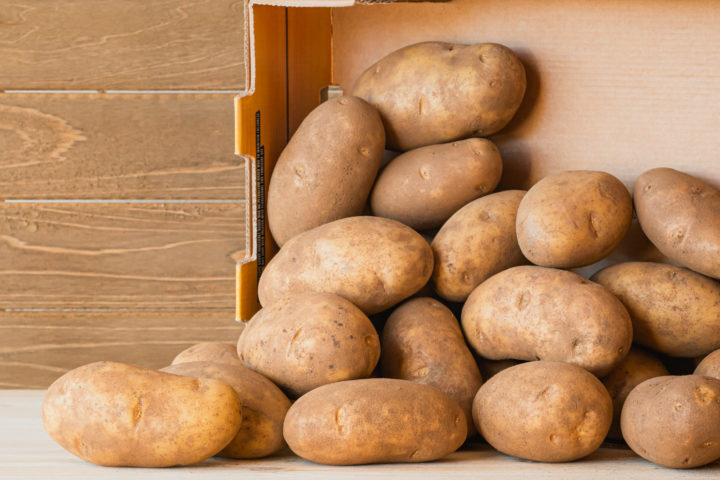 What would you pick between Idaho vs Russet potatoes? These are both famous types of potatoes available in the market and are generally considered quite good.

Since russet potatoes can be (and are) grown in Idaho, there is a considerable overlap between the two varieties.

Let’s take a look at the points that matter!

A Comparison And Differences Between Russet And Idaho Potatoes

Potatoes are a versatile food that’s common in pretty much every cuisine. They’re nutritious, good to eat, have a convenient shelf life, and are even relatively easy to grow!

There are more than 200 varieties of potatoes in the market. These varieties are divided into seven different categories. These are russet, white, yellow, red, blue/purple, fingerling, and petite.

Idaho potatoes are simply potatoes grown in the state of Idaho. These include several categories of potatoes, including russet potatoes.

Potatoes are a popular crop in the state, with more than 30 varieties of potatoes being cultivated.

So, the biggest difference between the two is that russet potatoes represent a category of potatoes, irrespective of where they’re cultivated. Meanwhile, Idaho potatoes are relevant only to the potatoes grown in the state of Idaho, USA.

What Are Russet Potatoes?

Russet potatoes are the most common type of potatoes. They’re those potatoes with the thin brown skin that you find in pretty much every grocery store. Though there are several varieties of russet potatoes, most of them fit this criteria.

In a way, for most people, potatoes are synonymous with russet potatoes. And herein lies the confusion.

According to the Idaho Potato Commission, more than 90% of Americans associate potatoes with Idaho. Per the same source, a majority of Americans say that they’d prefer buying potatoes from Idaho.

With the perception of such a strong correlation between Idaho and potatoes, most people see russet potatoes being the same as Idaho potatoes.

Of course, this isn’t true and both of these are very different types of potatoes, even if there is a considerable overlap.

What Are Idaho Potatoes

The Idaho Potato Commission has federally registered trademarks for “Idaho® potato” and “Grown in Idaho®”. With the commission keeping a watchful eye, only those who qualify can use these aforementioned trademarks.

Idaho has an excellent growing environment for potatoes. The state’s rich volcanic soil, climate, and irrigation, all contribute to the cultivation of some of the best-known potatoes in the world.

The state is a massive potato producer and since these potatoes are prized, they’ve used trademarks to protect the “brand”.

Russet burbank is the most widely cultivated potato in the USA and also in Idaho. Since a huge number of russet potatoes come from Idaho, people often confuse them to mean the same. However, attempts to genericize the terms russet and Idaho potatoes have met resistance.

With a bit of understanding, we can all agree that russet potatoes and Idaho potatoes are different things!

What Are Russet Potatoes Good For?

Russet potatoes are the most commonly cultivated variety of potatoes in the USA. These are the conventional potatoes that we know and love.

As such, they’re good for several dishes, including mashed potatoes, baking, and several other dishes.

Their low moisture and high starch content also makes them good for frying, including for French fries.

How Many Calories In A Idaho Potato?

Idaho potato represents any potato grown in the state of Idaho. As such, there’s a wide variety of potatoes that can be labeled Idaho potato. As such, it’s difficult to put an exact number of calories on Idaho potatoes.

However, a generally accepted number says that there are 110 calories in a 5.2 ounce spud of Idaho® Potatoes.

Though they’re often confused to be the same, it is clear that Idaho potatoes and russet potatoes are different food items.

Russet is a general category of potatoes that is cultivated around the world and is very popular in the USA. Idaho potatoes represent any potatoes cultivated in the state of Idaho, USA.

Therefore, though there is an overlap between Idaho and Russet potatoes, they are not the same thing.