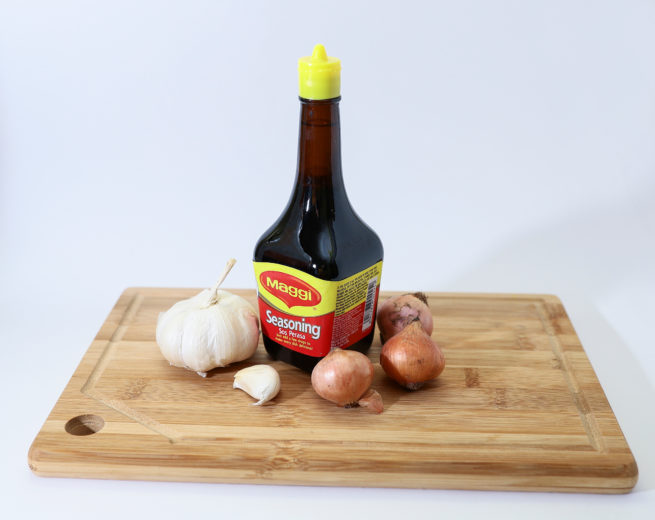 But what if you don’t have this magic condiment at hand and need a Maggi Seasoning substitute? Thankfully, there are plenty of options to choose from. Though extremely popular, this is still a brand product from a company.

You can find competitors from different brands, or other condiments and foods that bring the same umami touch and flavoring. Let’s see what are top options are!

Maggi Seasoning Substitutes That You Can Try

As we already know, Maggi Seasoning is a brand product produced by Maggi (Nestlé). Other brands too have their own similar offerings that are as good. A good example is Knorr Liquid Seasoning, which is pretty similar to Maggi Seasoning.

Both these products are so similar, that many people assume Maggi Seasoning and Knorr Seasoning are the same. However, there are some subtle differences between the two that go beyond the brand.

The famed Worcestershire Sauce is a good substitute for Maggi Seasoning. Its color, consistency, and umami flavoring are a great match for a substitution. Besides, its savory flavor can add that little extra touch and flavoring.

Worcestershire sauce has a sweet and salty flavor with hints of tanginess. While it isn’t an exact replacement, it is a pretty good one. In most cases, you can easily switch Maggi Seasoning with Worcestershire Sauce.

At the heart of Maggi Seasoning is fermented wheat. Soy sauce too contains some fermented wheat. Besides, the color, consistency, and umami touch of both these products are quite similar. While there is a difference in flavor between the two, it’s not a deal breaker.

Something to keep in mind is that soy sauce has something of a sweet flavor, while Maggi seasoning is saltier. Besides, soy sauce contains soy, which is missing in Maggi Seasoning.

Soy sauce and Maggi Seasoning are both very versatile products, which makes it easy for them to be used with several recipes. If you’d prefer a deeper color and flavor for the replacement, you can try your hand at dark soy sauce.

Either way, soy sauce is a good replacement for Maggi seasoning in most recipes.

The dark and flavorful tamari sauce is a variant of soy sauce. It doesn’t contain any wheat and is saltier. These specific qualities also give it something more in common with Maggi Seasoning. The color, texture, and flavor of tamari sauce can make it an acceptable substitute.

Tamari tends to lack the complex flavor profile that makes Maggi seasoning such a good choice. Yet, it has enough of the tasteful goodness to work as an acceptable alternative.

Fish sauce offers the same color and consistency as Maggi seasoning. It also has an earthy and umami flavoring that makes it quite the delicious condiment. A favorite in Asian cuisine, fish sauce is now found and used worldwide.

The versatile sauce works with a large variety of foods and can as easily take on the role of Maggi seasoning in several recipes.

Oyster sauce, like fish sauce, has the right color, consistency, and flavoring to be an excellent substitute for Maggi seasoning. The versatile sauce finds use in a lot of recipes and makes for a convenient alternative, should you need one.

Bouillon cubes, sometimes also known as stock cubes, are a great way to add a depth of flavor to foods. You can use them to thicken a food or to add a dash of flavor. Beef bouillon works best as a replacement for Maggi seasoning, though you could use chicken bouillon as well.

While this is a flavorful and delicious option, it doesn’t quite provide the same color, consistency, and flavor as Maggi seasoning.

Yet, the cubes have the same dash of flavor and umami touch that you’d expect from a wonderful seasoning. So, while not ideal, beef bouillon is a decent alternative.

The famous miso paste with its earthy and umami flavoring is an amazing way to add more flavor to your food. It doesn’t quite naturally feel like a substitute, but it is a pretty good one!

The amazing flavors of miso paste and its fermented soybean taste go very well with the flavoring and fermented wheat notes of Maggi seasoning.

Miso paste brings on an intense and deep savory flavor that you will love. Also, it’s exactly what you’d want by adding the seasoning to your recipe!

Liquid aminos are very similar to soy sauce in taste, texture, and color. As such, they also have a similarity with Maggi seasoning in all these categories. Although the chief comparison of liquid aminos is with soy sauce.

Aminos don’t contain soy or fermented products, which make them an alluring choice for those who’d like to avoid such foods.

They do, however, maintain a good deal of flavor, which is a big plus. Liquid aminos generally contain much lower salt as compared to Maggi seasoning and may not taste as intense. So, you may want to be prepared for additional adjustments to get that same flavor.

Kitchen bouquet is another brand product which has been around for more than a century. It’s generally used to thicken soups and gravies, but it’s as good an alternative to Maggi seasoning as any. It has the same color, consistency, and also very similar flavors.

Although a good replacement, Kitchen Bouquet is not as salty as Maggi Seasoning. That is a good thing, because the seasoning is kind of loaded up on salt. On the other hand, if you prefer a more familiar taste, adding some salt to Kitchen Bouquet should be a good enough fix.

Shrimp paste, sometimes also called prawn sauce, comes from South-East Asian cuisine. It has a good taste and is versatile enough to be used in several foods. However, the paste isn’t really used as a condiment by itself.

Primarily, shrimp paste is an ingredient that’s used for preparing sauces and curries. That said, it is possible to use this paste as a replacement for Maggi seasoning if you find yourself in a pinch. It’s taste is obviously shrimpy but it does have some flavor notes that match with Maggi seasoning.

What Is Maggi Seasoning?

Maggi Seasoning is a popular condiment made by the brand Maggi (owned by Nestle). The seasoning changes slightly in flavor and color to match various regions where it is sold.

In some places, Maggi Seasoning is employed as a Maggi Sauce substitute, though they can be very different products.

The seasoning typically has a brown color and slight consistency, which is quite similar to soy sauce. It also contains fermented wheat, much like soy sauce, though it isn’t the same as soy sauce either. It has a salty flavor (and it indeed can be quite salty).

It’s the umami touch that this seasoning brings that makes it so popular and a great addition to food.

Maggi Seasoning has several similarities to soy sauce in color, consistency, and even taste. The seasoning contains fermented wheat and is salty, both of which are also ingredients for soy sauce.

However, the seasoning doesn’t contain any soy and its complex flavor differs from soy sauce. Even so, it is possible to replace Maggi seasoning with soy sauce in several recipes.

Where To Buy Maggi Seasoning Sauce?

Maggi seasoning sauce is easily available in most grocery stores and big box stores like Walmart and Kroger. You could also get the sauce from Amazon, other similar sellers, or the online storefronts of various big box stores.

Maggi Seasoning is a popular condiment that adds flavor and life to several dishes and recipes. However, should you need a Maggi seasoning substitute, there are several easily available products and condiments that can handle the job without a problem.

Many commonly available condiments can do the job quite admirably. Give a shot to the substitutes listed here, and it’s likely you’ll find the right fit.