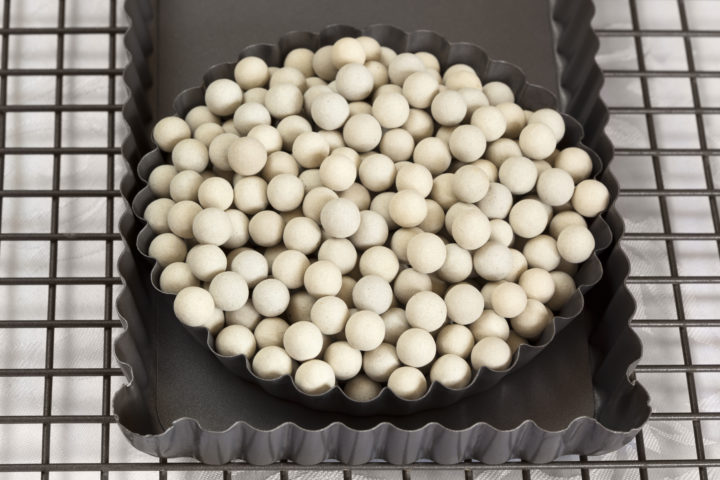 Pie weights are small ceramic or metal balls used to fix the form of the dough at the first stage of the baking process.

Of course not everyone owns them but when it comes to pies, tarts and other baked goods that call for similar items we need to use something else instead.

Luckily pie weights are not the only items used for this purpose. There are other useful items to use instead.

Dried beans are the first thing that may cross your mind when you don’t have regular weights for your pie. Yes, they work the best way and they are the safest substitutes for pie weights.

Cover the pie with baking paper or aluminum foil and then spread those beans over it. Dried beans are reusable weights and you can always rely on them whenever you need an alternative for pie weights.

If you don’t have dried beans, then rice can be another good choice. Just like in the case of dried beans you need to put baking paper or aluminum foil on the pie and then pour rice kernels on it.

Your pie will be cooked in time and it won’t change its form. At the end you can make a pilaf with this roasted rice and there is no need to throw it away.

Dried pasta is another effective way to have the desired pressure on the pie crust. Make sure it’s fully dried before covering the pastry crust with it because any moisture will act against the pie.

Although dried pasta seems to be similar to dried beans, rice and popcorn kernels, it’s actually more lightweight and you may need to use enough of it to see the result.

After using, you can cook it and use it as a separate dish. For a better result, you can crush macarons into smaller pieces and then add on the pie.

If you don’t regret a handful of popcorn then you can use it instead of pie weights too. Just keep a cup of it in your pantry for this purpose because when it’s dried in the oven it won’t pop.

Use it the same way as dried beans or rice and don’t forget about the baking paper or aluminum foil.

Whether it’s knives, forks, spoons, a metal chain, small steel balls or any other suitable metal object that you have in your kitchen or pantry, it can hold your pie in place. Just make sure to cover the pie before putting metals on it so that you could avoid any metal “taste”.

Also you should be careful with this substitute because not all metals are safe for the oven: choose those that won’t harm it. At the end, don’t forget to wear oven gloves when removing the metal objects.

Nest pie plates or other forms of pie can also be used to replace regular pie weights. In order to avoid any mess, either put aluminum foil before placing the form or spray some oil on the button.

This way it won’t stick to the crust and the pie will maintain its form. You can bake the pie upside down. The gravity will do the job and the pie won’t shrink during baking.

You can remove the second pie form when the pie is half-baked to let it become flaky, golden and well cooked.

An easy substitute that you may have in your kitchen is sugar. The best thing about sugar is that it evenly spreads all over the surface and makes the pie get its form quite well.

It’s also reusable, as you can add it to recipes that call for a toasty and caramel-like flavor. So, first, cover the crust with baking paper or aluminum foil and then pour the sugar over it.

Although coins are not the most acceptable idea, they work too. Just in case you have a handful of coins you can put them over the tightly covered pastry crust and the result will be satisfying.

In order to avoid any possible touch between the pie and crust, make sure the aluminum foil or the baking paper is firmly warped on the sides of the pie form.

While this is not an easy-to-find substitute, if you happen to have decorative polished river rocks, you can use them instead of pie weight too. Compared to other substitutes they are even heavier and much more useful for this case.

Cleanse river rocks before using and don’t forget to place baking paper and a clean muslin cloth over the crust to get an evenly baked pie.

Glass marbles are other decorative stones you may have at your home or in the nearby design store. They are heat-resistant items that you can use to hold the shape and form of your pie.

Cover the crust with baking paper and a layer of a clean muslin cloth and then put the cleansed marbles. This way, you’ll make sure the pie is cooked evenly like in the previous case.

Steel balls have a similar shape and almost the same weight as pie weights and they work the same way. They will help the pie bake evenly inside and outside and as a result you’ll have a crispy bakery.

Just make sure they are sanitized and oven-safe and keep them for later use too. Before you may place them on the crust, cover it with baking paper.

Lentils work just like beans but compared to beans they are lighter and you need to add more to get that heavy cover for the pie crust. You can always use this option if you don’t have ceramic balls or other reusable objects.

The only disadvantage of lentils and beans is that when you heat them in the oven they become harder and useless afterwards as a food. You may just store them in a jar once they are cool and use them as pie weight replacements.

Can you use pie weights more than once?

Metal or ceramic pie weight are actually reusable, but if you use something else instead of them then you should consider several factors before reusing them. For example, in the case of sugar, it’s not recommended to use it twice because it will over-dry in the oven and spread a burnt flavor.

How heavy are pie weights?

1 package of ceramic pie weights is about a half a pound.

How many pie weights do you need for one pie?

You may need 2-4 packages or about 2 pounds to fill an entire pie shell.

Before we used to use different items for pie crust but since today we have pie weights we don’t need to think of any other thing to replace it. However, many of us may not have them in our kitchens, so we can refer to the old traditional methods.

We offer pie weight substitutes that won’t change up the color or the flavor of your pastry but you still need to cover the crust with baking paper in some cases.