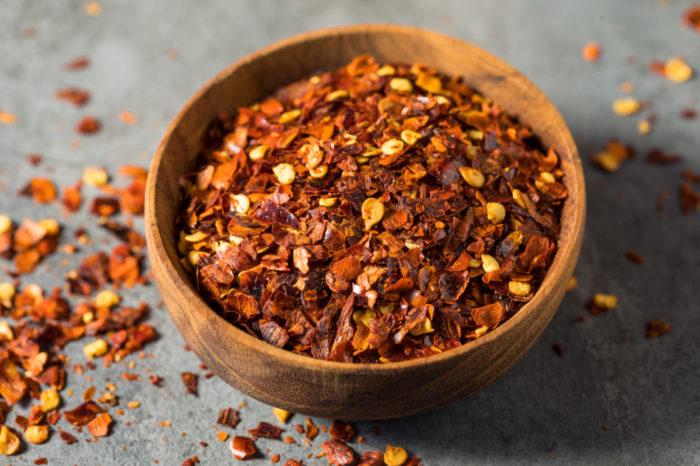 Compared to many savory condiments, red pepper flakes are among the hottest spices that some people can’t tolerate.

If you are among this group of people then take a look at this guide to the best red pepper flakes substitutes to use whenever you need to replace it with a lower-heat option or don’t have it in hand.

Although the level of heat may vary depending on which type of red chili peppers the flakes are made of, you can reach the necessary amount of spiciness or reddish color with the help of these substitutes.

It’s actually hotter than regular red chili pepper flakes, but you can use it in small amounts to reach the same level of heat in the dish.

One of the best substitutes for red pepper flakes are dried chili peppers. They taste almost the same way and you can even get homemade red chili flakes if you crush them into flakes.

You can use them in stews, soups, chili and tomato sauces. You can also use them in meat or fish marinades.

Do you have chili powder in hand? It is a blend of chili pepper, onion powder, cumin, and garlic powder. Different versions of chili powder come with different levels of heat and you can use more or less according to your preferences.

You can use chili powder not only to add flavor to the dish but also to bring an appealing red color. Use 2 teaspoons of chili powder instead of 1 teaspoon of red pepper flakes.

Unlike powders and crushed peppers, chili sauce contains not only peppers but also other ingredients such as sugar, salt, vinegar, garlic, tomatoes and water. It has a rich flavor and tastes both hot and spicy at the same time.

So, decide where you can use it to replace red pepper flakes. It goes well with sandwiches, noodles, meats and serves as a great dipping sauce for different dishes.

As for chili paste, it is thicker in texture and contains more chilies than chili sauce. You can use it in sauces, noodles and soups in place of red chili flakes.

Just like chili sauce, chili paste comes with different heat levels. Make sure to use this substitute in small amounts to avoid too much spiciness.

If chile de Árbol is available in your markets, you can consider it as another good alternative for chili flakes. It is a Mexican type of red hot peppers and looks like cayenne peppers.

Dried Chile de Árbol has a nutty, smoky and earthy flavor with different levels of heat.

There are fresh, dried or powdered versions of this pepper and depending on your recipe you can use the most suitable variety. If you have the dried version, you can crush it and use it as a substitute.

Habanero is considered to be a hot variety of chili peppers. It comes with an orange-to-red color and tastes sweet, slightly hot and fruity when fresh and has a hotter flavor when dried.

Red thai peppers, native to Thailand, are other varieties of chili with the same level of heat as red pepper flakes.

Of course the heat may vary but if you have them either fresh, dried or powdered, you can use them in stews, soups, marinades and sauces. You may grind dried thai peppers into flakes and get what you need.

The smoked and dried version of jalapeno peppers is called chipotle peppers. You can use either in powdered or crushed forms to replace red pepper flakes in soups, stews, marinades, with beans or as a topping for pizzas, sandwiches and salads.

Since they are made of red jalapenos, the color of the dish will be the same as in the case of red pepper flakes.

Serranos are Mexican chile peppers sometimes being confused with jalapenos, but they are actually 10 times hotter than jalapenos.

You can use powdered serrano pepper instead of red pepper flakes in meat marinades, sauces and pastas. Make sure to use less than flakes to have the necessary level of heat in the dish.

Since red pepper flakes are a mixture of several types of chilies and hot red peppers, you can easily make it at home if you have at least 2 types of them.

The mixture of crushed jalapeno peppers, cayenne, and anaheim provides a similar taste to red pepper flakes. If you also have dried red chili peppers, then you have all the necessary ingredients for a perfect substitute for red pepper flakes.

First, dehydrate the peppers in the dehydrator or oven and grind. Mix all well and store in an airtight jar. Keep it in a cool place next to other savory condiments.

How hot are red pepper flakes?

What’s the difference between crushed red pepper and cayenne?

If you dehydrate and store it properly it will last up to 3 years. Keep it in a cool place, away from heat or moisture.

Where can I use red pepper flakes?

The usage of red pepper flakes is quite wide. You can use it in sauces, soups, stews, marinades as well as with noodles, meats, sandviches, salads and pizzas as a topping. They will bring a hot flavor and bright red color to any dish you add them into.

How much red pepper flakes should I use?

Just a pinch of red pepper flakes is enough to get a spicy flavor for the dish. Start with ⅛ teaspoon and add more if necessary.

While chili red peppers are not the only hot spices out there and you can find good red pepper flakes substitutes, you should also check the level of heat for each alternative before substituting.

Some have a low heat level, others taste hotter than chilies. So, make sure you use appropriate ratios to get the desired flavor.