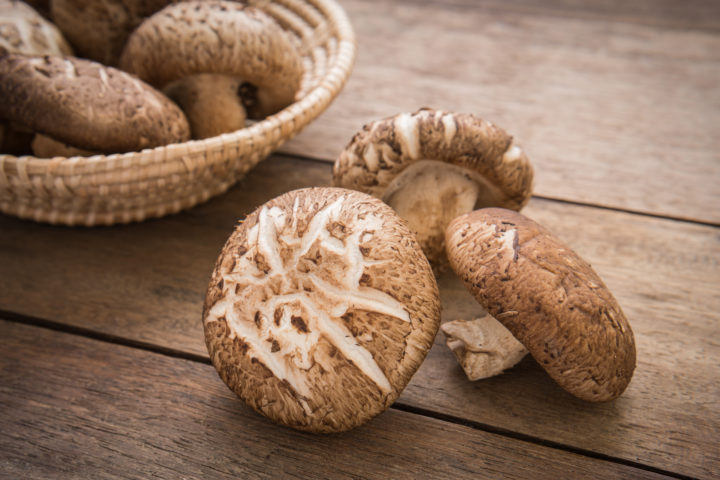 Shiitake mushrooms are an edible type of fungus originating from China and Japan. They contain a chemical called lentinan which is good for the immune system.

You can eat them both raw and cooked, but they are more often used in cooked dishes to bring out the best of their flavor.

Shiitake mushrooms have a rich nutty, meaty and buttery taste which you can find in many other mushrooms and not only. If you want to know more about its substitutes, then stay with us!

If your recipe doesn’t require fresh shiitake, and you are free in your choice, then dried shiitakes can also work. They will bring the same taste and flavor and will help to get the same result without using any other ingredient. It best goes with cooked dishes.

In fact, dried shiitakes offer a stronger flavor and a better taste than fresh ones. So, they are perfect substitutes for shiitake mushrooms.

You can add dried shiitake mushrooms to noodle soups, stews, braised dishes and stir-fries with vegetables.

Compared to fresh shiitake, canned shiitakes have a distinct flavor and different taste. However, they are similar in the end dish. They both taste meaty and buttery when cooked.

Of course, it’s more pleasant to eat fresh mushrooms, but if they are not available, then you may use canned versions instead. It tastes good in soups, stews, casserole dishes and pasta sauces.

Crimini mushrooms are easy substitutes to shiitake mushrooms as they are available all-year-round and you can find them in almost all grocery stores or markets. They have brown skin and are white inside. These mushrooms are the mature version of white mushrooms.

Crimini mushrooms have an earthy and savory taste. You can use them instead of shiitake mushrooms in many recipes as they have a firm texture and the end result is so similar to shiitakes when cooked.

Portobello mushrooms are similar to crimini mushrooms both in texture and appearance. They are brown outside and white inside and have a firm texture. These are large, meaty mushrooms with rich umami taste and savory flavor. They are easy to find fresh in any season.

Portobello mushrooms are popular in Europe and North America. They are more affordable than shiitake mushrooms. You can use them in almost all recipes calling for shiitake. They are tasty in grilled, roasted dishes as well as in sauces.

While shiitake mushrooms are hybrids, oyster mushrooms grow on trees and are organic. They have more health benefits than many other types of mushrooms. You can use them in place of shiitakes in a number of recipes.

Oyster mushrooms are large enough but there are also king oyster mushrooms with a larger size. Whichever you have in hand, you can safely use it to get a meaty texture, umami flavor and seafood hint in your dish.

Maitake mushrooms are a good alternative to shiitake mushrooms in stir-fries, pan-fries, side dishes and sauces. Although they don’t have a meaty texture, they have a deep earthy flavor.

These mushrooms are popular in Asian cuisine and since shiitakes are also Asian mushrooms, maitake can be used to substitute them in many Asian dishes.

Although they are called mushrooms they are practically parasitic molds that attack surrounding mushrooms, wrap them and get their appearance. They are orangey outside, white inside and have a meaty texture like lobsters. Now, you know where  the name comes from.

Overall, lobster mushrooms taste like mushrooms and since they are meaty, they can be used in recipes calling for shiitake mushrooms.

Special for those looking for a non-mushroom substitute for shiitakes, there is tempeh to consider. Tempeh is an Indonesian dish made of fermented soybeans which are deep-fried. Due to the fermentation, it has an earthy, mushroom-like flavor. It has a chewy and nutty texture and can be a good mushroom substitute in many dishes.

You can use it instead of shiitake if you have allergies from mushrooms but still need to have a umami flavor in the dish.

Shiitake mushrooms are considered as one of the healthiest mushrooms in the world. They contain eritadenine which helps to reduce cholesterol levels in the blood.

Other compounds help to fight cancer and boost the immune system. They are also high in vitamin B and vitamin D.

Are shiitake mushrooms good for dogs?

Yes, shiitake mushrooms are good for dogs as they aren’t found in the wild as well as they come with health benefits.

Why are shitake mushrooms so expensive?

Compared to crimini, portobello and some other popular varieties of mushroom, shiitake mushrooms are expensive because they require wood for growth and have a higher level of demand on markets.

What is the difference between shiitake mushrooms and regular mushrooms?

Shiitake mushrooms have a unique woody flavor that’s stronger than the flavor of regular mushrooms. They have a rather chewier texture than spongy, unlike some regular types of mushrooms.

What are the side effects of shiitake mushrooms?

Besides being so healthy, shiitake mushrooms may also have side effects such as skin swelling or stomach discomfort. It may also cause allergies and skin sensitivity towards the sun.

Whether you eat shiitake mushrooms raw or cooked, we have tried to cover up the best substitutes for you to use in any dish that calls for this particular type of mushroom.

The vast majority of mushrooms come with an umami taste that makes them distinctive from other plants and vegetables, that’s why it’s easy to find a similar flavor in other mushrooms.

However, we offer non-mushrooms alternatives too in case you don’t want to use mushrooms in your dish.