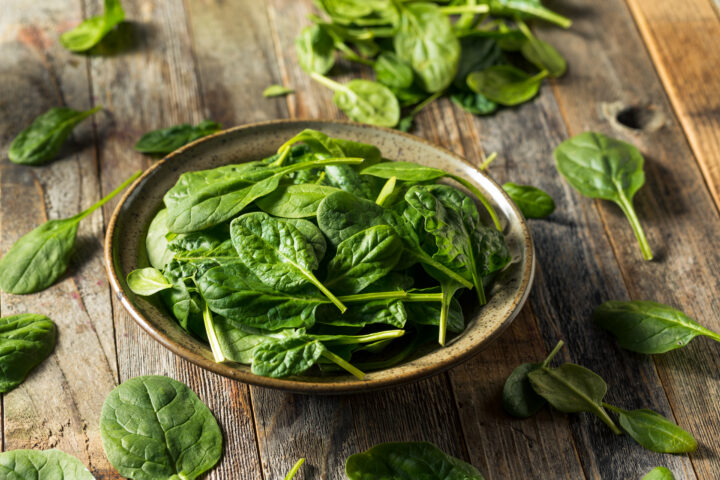 Spinach is a nutritious leafy green that’s quite easy to find in any season either fresh or frozen. However, not everyone likes the taste or texture of cooked spinach and here we are to discuss several spinach substitutes that you can use plain or cooked.

Raw spinach has a mild and slightly sweet taste. It has a crunchy texture and becomes very soft and mellow when cooked or sauteed. It’s used in salads, baked and cooked dishes, and not only. Spinach is one of the best greens in diet-friendly smoothies and dishes.

Many people like to have spinach in their fridge for frequent use and if you belong to this group of people then these substitutes will come for help whenever you run out of spinach.

Best Substitutes for Spinach To Try

Kale is another easy-to-find leafy green that has a crunchy texture and tastes strong and earthy. The more mature it is, the tougher its leaves are. So, choose the one that comes with the closest texture to use instead of spinach.

It also looks similar to spinach and has the same fresh green color. You can use it both raw and cooked in salads, grilled side dishes, breakfast casseroles, on pizzas, stuffing, and with roasted dishes. You can even make healthy smoothies with kale if you don’t have spinach in hand.

Although lettuces don’t come with the same crunchiness as spinach, they are other good alternatives for spinach. Romaine lettuce is very nutritious and you can use it raw in sandwiches, tacos, and rice bowls. This leafy green is available all year round.

The best way to use romaine lettuce is to add it to salads. Numerous salad recipes are calling for romaine lettuce. If you want to use it in cooked dishes instead of spinach then you can stir fry it, grill, sautee or add it to soups. Avoid overcooking it.

Arugula tastes subtler than spinach with peppery and tart undertones and has some crunchiness that makes it a suitable alternative to spinach in salads. Baby arugula has a milder taste while mature arugula tastes a bit spicy.

Depending on your preferences, you can use either baby or mature arugula in place of spinach. You can use it in salads, stir-fries, pizzas, soups, pasta, omelets, sandwiches, and with roasted vegetables.

Escarole belongs to the chicory family. It’s a leafy green with a fresh and slightly bitter flavor. This green is used in pasta, soups, stews, and sauteed dishes.

You can also add it to salads and sandwiches to replace spinach. If you want to cook it, then saute it the same way as spinach and season it with olive oil, garlic, or your favorite seasonings.

Many people prefer eating escarole raw as it tends to lose its strong flavor when cooked. It also gets spoiled quickly which means you should keep it in the fridge and wash it only before using it.

Watercress is a leafy green with small leaves. It comes from the mustard family and tastes like relative vegetables. It’s crunchy and has a fresh, peppery, and slightly bitter taste. It also looks like baby spinach and can be used instead of it as a dressing.

You can use watercress in salads, soups, sandwiches, sauces, stir-fries, dips, smoothies, and as a dressing. This green tastes awesome in baked goods too. If you are planning to bake something with spinach but it’s missing from your table, then use watercress instead.

Next, come collard greens with their wide and tough leaves that offer the desired crunchiness to add to your dishes. It tastes like kale with some bitterness and sometimes is described as a blend of kale and cabbage.

You can use collard greens in salads, soups, stir-fries, casseroles, meaty braises, and stews. Another way to use collard greens is to bake them with other ingredients. Make sure you remove the stem before using it and chop the leaves into smaller pieces to replace spinach in a dish.

There are several varieties of beet greens, also called chard. They are leafy greens with a mild, sweet, and earthy flavor. They become very silky and delicate when cooked and resemble spinach. You can use them in omelets, baked dishes, pasta, or grain bowls in place of spinach.

You can roast them a little bit in the oven and use them in salads or as a dressing. Use the same condiments as you use with spinach to get a closer taste.

There are three varieties of green lettuce: red, green, and oak. Choose the dark green one to substitute raw spinach. It’s perfect for salads as it has similar crunchiness and tastes mildly sweet and slightly bitter.

You can also grill it, and add it to stir-fries, soups, or braise. You can use dark green leaf lettuce to get a more similar appearance to spinach in your dish.

How do you know if spinach is cooked?

You know it’s ready when it’s completely wilted and the color turns bright green. It takes several minutes (3-5) and you should not overcook it.

Spinach is included among the best vegetables for a keto diet. It is low in carbs and very nutritious at the same time. Other keto-friendly greens mentioned above are lettuce, collard greens, and arugula.

Is spinach good for dogs?

Yes, dogs can eat spinach but not too much because it’s high in oxalic acid overusing which may lead to kidney disease.

If you are looking for spinach substitutes to use in your diet then you should pay attention to the calories and other features each of these alternatives comes with.

Most of them have a similar texture and taste to spinach but there may be little nuances regarding cooking time and techniques that you should consider beforehand.