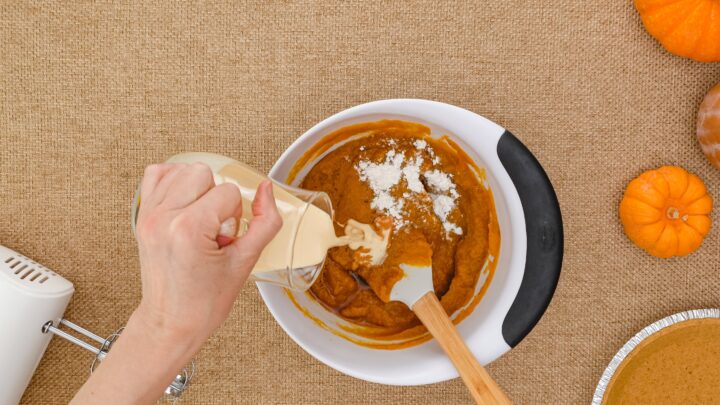 The traditional recipe of pumpkin pie calls for evaporated milk as one of the essential ingredients. However, many people look for vegan friendly recipes for this pie.

If you are among them then check some of the best substitutes for evaporated milk in pumpkin pie. We also share non-vegan options, in case you have run out of evaporated milk or want to try something else instead.

The best substitute for evaporated milk is considered to be heavy cream as it comes with the same texture and doesn’t differ in taste too much. It is used in many baking recipes calling for milk or evaporated milk and the result doesn’t yield.

Moreover, it beats evaporated milk in nutrient content as it comes with a higher amount of calories. If you have regular milk, you can use it to dilute heavy cream a little bit and then use in pumpkin pie.

Compared to evaporated milk, whole milk comes with a thinner texture, but you can balance it with the help of cornstarch.

Another difference is that evaporated milk contains almost no water content whereas whole milk may come with almost 85% of water content in it.

Lactose-intolerant people usually avoid using evaporated or whole milk in their recipes. This refers to vegetarians too that don’t use dairy products in their dishes.

So, there is lactose-free whole milk for both cases and you can consider it as the next good substitute for evaporated milk.

Lactose -free whole milk comes with the same taste, texture and nutrient content as regular milk and it works in all recipes.

When it comes to buttermilk, we see that it has the same thickness as evaporated milk but offers lower fat content.

Compared to evaporated milk, buttermilk is made of low or nonfat milk and if you want to use this alternative, then you may need to add additional butter in your pumpkin pie recipe for the best result.

By replacing evaporated milk with buttermilk in pumpkin pie you make sure you bake a delicious and very delicate dish.

Almond milk is a good idea in case you are looking for a vegan-friendly or dairy-free pumpkin pie recipe. Almond milk has a creamy and smooth texture and can be used in place of evaporated milk in many recipes.

There are sweet and unsweetened almond milks and you can use whichever you have in hand. If you opt for the sweet one, then use less sugar in the pie.

As for the taste, almond milk has a nutty almond taste but it won’t be so noticeable in the end dish.

In order to use it in 1:1 ratio, you may first simmer almond milk for about 35 minutes on a medium heat and then use instead of evaporated milk, this way you’ll get a similar texture.

You can use it in a 1:1 ratio and the end dish will be very nutritious and delicious. There are many recipes for coconut pumpkin pie and you can try one to see the difference between the traditional recipe and other versions. It’s again a dairy-free and vegan-friendly option.

Condensed milk is actually evaporated milk with a lot of sugar added into it. Its texture is gooey, and the taste is quite sweet. By using this product in any pie you can skip adding sugar or add a little bit of it and it’s quite sweet on its own.

When it comes to pumpkin pie, it will provide a silky, buttery and very delicate result. It’s quite logical to replace evaporated milk with condensed milk.

You may have powdered milk somewhere in your pantry and if you have forgotten about it then it’s the best time to use it for a special purpose. Powdered milk can be used to replace evaporated milk in pumpkin pie.

Both evaporated milk and powdered milk are a product of cow’s milk and they share the same taste. Follow the package’s instructions of powdered milk when using it in baking.

Half and half perfectly works in pumpkin pie as it contains both milk and cream and the texture or fat content is similar to evaporated milk. It’s actually slightly higher in calories and fat than evaporated milk.

If you have milk and cream in hand, then you can easily make a homemade half and half and use in place of evaporated milk.

Compared to some other plant-based milks, oat milk is richer and creamier. Using it instead of evaporated milk, you’ll get a nutritious and very tasty pumpkin pie. Oat milk is slightly sweet but additional sugar is needed to make the pie sweet and thick.

Oat milk is high in protein and is very nutritious. It is often used in baking recipes in place of dairy products.

I always use it in place of evaporated milk in pumpkin pie and the result never disappoints.
You can also add cinnamon to make it more suitable for pumpkin pie as well as enhance its flavor.

Eggnog is usually used in cold months and becomes more popular especially at Christmas. Thus, it’s one of the most appropriate products to use in pumpkin pie in fall and winter.

How do I make pumpkin pie filling thicker?

You can use a pinch of cornstarch to make the filling of pumpkin pie thicker. It helps to keep the pie firm outside and smooth inside. If you don’t have cornstarch, you may use tapioca, arrowroot or potato starch.

What is the purpose of evaporated milk?

Evaporated milk is used for many purposes:  to thicken up and sweeten coffee, add richness to creamy soups, savory sauces and even oatmeal. It works in dishes where regular milk won’t.

Pumpkin pie is a symbol of harvest time and it’s usually eaten in fall or early winter when pumpkin is in season. One of its main ingredients is evaporated milk but it’s not a must.

However, you need to replace it with another variety of milk to bake this dessert. There are easy alternatives and now you know what to use to substitute evaporated milk in pumpkin pie whether you use dairy or non-dairy products.