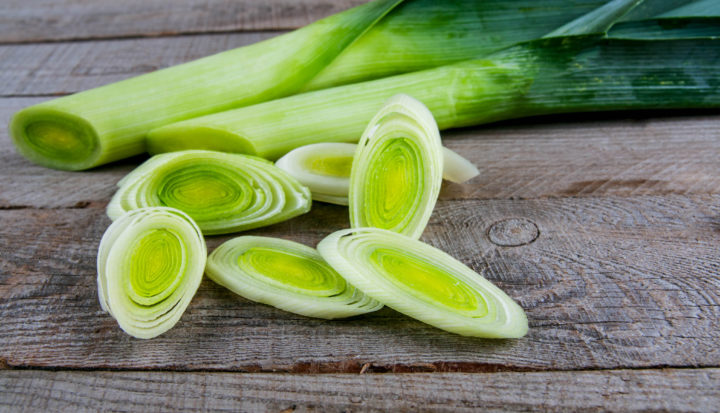 Leeks are healthy vegetables originating from the Allium family. They are as popular as onions, garlic, shallots and other members of this family.

However, when they are out of season it becomes hard to find them fresh. In this case you can refer to the substitutes for leeks we offer in this article.

They will help you keep the taste of your dish and not only. On the other hand, leeks don’t last long and you can’t keep them in your pantry like onions or garlic.

Leeks have white roots and light green leaves, both of which are edible. They taste sweet-oniony which best goes with stews, soups, omelets, pastas and many other dishes. They are also used as topping for salads, raw dishes and roasted foods.

It is better to add leeks at the end of cooking because they become soft and lose their texture when overcooked.

Keep on reading to learn more about this useful plant and its substitutes.

Scallions, also called green onions or spring onions are very similar to leeks in taste and appearance. They have thinner leaves but provide the same sweet oniony taste. So, you can use them both raw and cooked.

When used raw, unlike leeks, both the white and green part of scallions are used because they are subtle enough. Leeks come with a tougher texture and only white parts are eaten raw. Raw scallions serve as good dressings for salads.

As for cooking, scallions are used in soups, stews, omelets and in any other dish calling for leeks. Just like leeks, scallions also become soft when overcooked.

Perhaps all types of onions can substitute leeks and between them the most popular options are white, red and yellow onions. They differ in color and flavor, but will help you get the same taste as leeks especially in cooked dishes.

White onions are juicy and taste milder than yellow and red onions. Yellow onions are sweeter and red onions have a spicy-to-mild flavor. They all lose their flavors when cooked and get the same texture and appearance in dishes.

These onions are perfect for soups, stews and other cooked meals. You can safely use them instead of leeks.

When it comes to salads and raw dishes, you can substitute leeks with these types of onions too. The choice depends on your taste and preferences.

If you want a mild and sweet flavor rather than spicy, then go for white and yellow onions. On the other hand, red onions provide a pop of color to salads but they smell stronger.

Compared to onions, shallots don’t come with a tangy bite as they are more of a sweeter side with a subtle garlic flavor.

They are something between onion and garlic. Shallots are perfect as leek substitutes. You can use them when you have neither leeks or onions in hand.

Shallots are widely used in cooked dishes including soups, stews, risottos and the like. They are also used with roasted meats and vegetables, mushrooms, beans and peas.

They taste good in salads. If you like roasted leeks, then you’ll probably love roasted shallots too.

Ramps are sometimes confused with wild leeks as they come with a similar flavor. These little greens have white-to-purple roots with green leaves.

Ramps are more popular in the United States and in Canada but if you have the chance to get them, then you can use them instead of leeks.

You can choose ramps for stews and cooked dishes. They best go with grilled and roasted meats and vegetables and are often used fresh in salads.

Since leeks also carry garlic flavor, green garlic or spring garlic can be a good alternative for it. Of course, garlic has a stronger taste and it comes with a pungent flavor but if you use it in smaller amounts, then you’ll reach a similar taste to leeks.

Green garlic is available in its season but in case you can’t find it, then you can always use garlic instead.

However, green garlic is able to substitute leeks both in taste and appearance. It has garlic bulbs and edible green leaves, both of which can be used in dishes.

Something between leeks and scallions is calcots. This vegetable looks like mini leeks. They come from Spain and have a mild sweet taste.

There is a traditional Spanish food where the main ingredient is calcots. They just roast it on fire and eat it with sauces.

If you find them, then you can also use them instead of leeks in many dishes.

In case, you don’t have any fresh substitute for leeks, there are still two seasonings to use instead of them.

Powdered garlic and onion are both aromatic spices to use in cooked dishes where leeks are required. You will provide your meal with a similar aroma and taste.

These are one of the easiest substitutes many of us have in our kitchens. However, they mostly replace leeks in hot meals and not in raw dishes.

Are you still looking for something else? What about celery? This plant differs from leeks in its taste and texture but it is an accepted substitute to leeks according to many cooks.

It has a kind of peppery flavor and mild earthy taste. You may consider it for stews, soups and salads.

Celery has some crunchiness like leeks and if you want to maintain it in cooked dishes, then make sure you add them at the end of the cooking process.

Did we miss anything? Well, perhaps your final choice can be frozen leeks. If you don’t want to use any other vegetable instead of leeks, then you’d better store leeks in your freezer for all cases.

Wash leeks in water and cut them up into the way you like. They are ready to be stored. You don’t need to defrost them before using them. They can substitute fresh leeks in cooked dishes.

10. Carrots: Substitute for Leeks in Soup

One chopped or grinded carrot adds vitamins, additional flavor and color to your dish. You can sometimes use carrots instead of leeks in soups especially if your soup seems to be dull without veggies.

Carrots become soft and taste mild when cooked but if you don’t want to get a too soft texture, make sure to add them at the end of cooking.

Can you substitute spring onions for leeks?

Yes, you can use spring onions instead of leeks, especially in soups. 1 cup of sliced spring onion is equal to 1 cup of leeks.

How to chop a leek?

Take a large knife and remove the root end of the leek and the tough white-to-green top with it.

Separate the leaves and rinse with water to get rid of any dirt between the layers. Slice the tough part into half-moons.

Then place the layers horizontally and cut into 2 halves vertically. Put the two halves on top of each other and slice by circular motions.

What part of the leek do you eat?

Usually white and green parts of leek are edible.

Is leek healthier than onion?

Compared to onions, leeks offer more niacin and folate. They contain more Vitamin A than onion and they are a great source of calcium and iron.

Now you know what are the best substitutes for leeks and in case you don’t have leeks in hand, you can always refer to this useful guide.

Perhaps leeks are a new type of vegetable for you and this is the first time you hear about them. Try them once if possible and come up with your personal opinion about how it tastes and whether it tastes like onions or other substitutes or not.