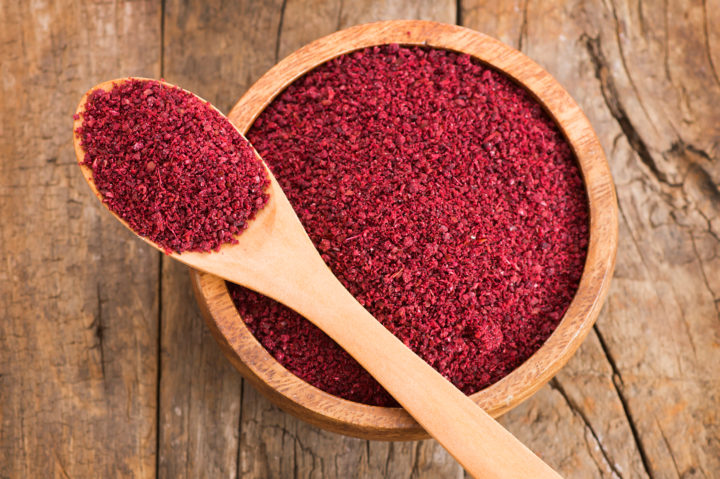 Sumac is a spice with a lemony and tart flavor. It is used to flavor meats, vegetables and hummus. If your recipe calls for it but you can’t find it in your local stores, don’t worry. There are many sumac substitutes that come for help.

It’s important to note that some substitutes offered below have a more powerful flavor than sumac and you should be careful with the ratios.

Lemon juice and zest take the first place because they offer similar tangy flavor and citrusy taste that can ideally work instead of sumac.

Although it doesn’t have the bright burgundy color of sumac, it still has a fresh and pleasant lemony hue that will make your dish look interesting and tasty.

If you don’t have lemon in hand, but there is lime in your kitchen, it can work instead of sumac too. You need just a pinch of lemon zest and a little bit of lemon juice to replace sumac. Avoid over flavoring the dish with this substitute because it is stronger in its acidity than sumac.

Another lemony condiment is lemon pepper that holds both citrucy and peppery undertones which is a perfect substitute for sumac in a number of dishes. It is made of granulated lemon zest and cracked peppercorns.

Lemon pepper differs from sumac in texture and color but the taste is similar. It tends to bring a  fresh taste to dishes and make them more appetizing. You can use it with poultry, seafood and use a topping for many dishes.

Tamarind is a tropical fruit from Mexican cuisine. It has a sour taste like sumac and is used to add tangy, sour and sweet flavors. If it’s available in your markets, you can use it as a good condiment instead of sumac in many dishes.

Keep in mind that the riper the fruit, the sweeter it is. So, choose immature tamarind fruits to have the desired sourness in your dish.

One of the easiest alternatives to sumac is vinegar. It has a similar tangy and acidic flavor that compliments salads, sauces and cooked dishes.

It won’t provide your dish with bright red color but the taste will be almost the same. The best news is that there is a wide variety of vinegars in grocery stores and you can choose whichever you want according to our taste and recipe.

Since za’atar is a middle eastern spice, it shares similar flavors and can be used to replace sumac. It’s a combination of unique condiments that make it taste aromatic and add a special flavor to dishes.

Another ground spice that offers a similar sour taste to sumac is coriander. Its floral and citrusy taste allows it to be on the list of the best replacers for sumac. Ground coriander tends to add a fresh touch to dishes and is used both in cooked and raw dishes as a topping.

This condiment has a golden yellowish color but comes with a similar texture as sumac. It is used in sauces, drinks and marinades. You can add it to soups and stews too.

If you are not familiar with amchoor then let me tell you that it’s the powder of dried unripe green mangoes. You know how mago tastes and imagine how it will taste when dried immature.

Amchoor is a great substitute for sumac. Its citrus and tart taste make it a good condiment for many dishes calling for sumac.

If you are after the visual result and look for a substitute that comes with a similar color, then choose smoked paprika. You can sprinkle it over the dish and get the same look as in the case of sumac.

Smoked paprika has a smoky and spicy taste with some sweetness, and it’s actually a different spice. However, if you need to keep the color and use only as a dressing, then it works.

Sumac is a bright red spice that has a tangy, lemony flavor. It is commonly used in Middle Eastern cuisine, and can be found in staples like za’atar and dukkah.

Sumac can be purchased at most Middle Eastern markets, or ordered online from specialty spice retailers. When purchasing sumac, look for bright red berries that are free from blemishes or mold.

The berries should also be finely ground, with a texture similar to that of paprika. Add sumac to roasted vegetables, grilled meats, or homemade salad dressings for a pop of flavor.

Or, use it as a replacement for lemon juice in recipes like hummus or tabbouleh. Whatever way you choose to use it, sumac will add a unique zing to your cooking.

Where to buy sumac?

If you’re looking for sumac, your best bet is to head to a Middle Eastern grocery store. You can also find it online like Amazon, but it could be more expensive.

Sumac is a delicious spice, but sometimes it can be hard to find. If you’re in a bind and can’t find sumac, here are some substitutes that will give your dish the same flavor profile. Have you tried any of these substitutes for sumac?