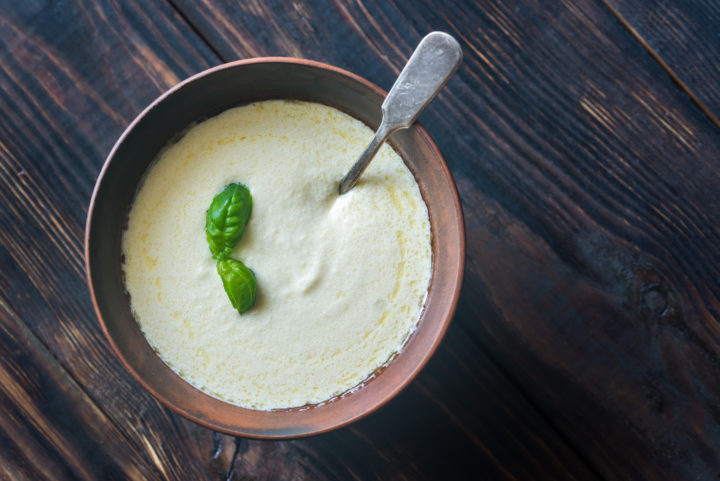 Alfredo sauce is a pasta sauce made of heavy cream, melting butter and parmesan cheese all of which have their special place in it. If one of these ingredients is missing, you need to replace it with something else to get  a similar texture and flavor.

Today, we’ll discuss substitutes for heavy cream in Alfredo sauce to help you find out the most similar alternatives to this ingredient.

The role of heavy cream in this sauce is to thicken it and make it creamy. It also adds a mild buttery and milky taste especially when mixed with butter and parmesan.

If you often use this sauce in your dishes, then you may like to know how to make it with the ingredients you have in your kitchen. We offer a recipe of alfredo sauce without heavy cream and it’s easy to make at home.

This one is ideal for those looking for lighter creamy sauces. But the best part about this sauce is that it is naturally gluten free and can please vegans too with a little bit of changes.

Instead of heavy cream you can use milk and cream cheese according to your diet. It can be either diary-based or vegan-friendly milk.

2 tablespoons of oil or butter

1/2 teaspoons of salt and black pepper

Chopped parsley, rosemary and coriander for a better flavor.

2 tablespoons of oil or vegan butter

1/2 teaspoons of salt and black pepper

How to Make Alfredo Sauce without Heavy Cream:

Now, as you know what you need to make alfredo sauce and you have all the necessary ingredients, let’s pass on to the preparation.

First, heat the milk in a saucepan on medium heat. While the milk is on the heat, mix some water with cornstarch or flour until it’s smooth.

Once the milk starts to simmer, add this blend, mix and lower the heat. Continue mixing until you reach a creamy-like thick and smooth texture. Add the seasonings and herbs and serve immediately.

Instead of whole milk you can use soy milk, unsweetened almond milk, coconut milk or oat milk for vegan recipes. As for the flour, you can choose between all purpose wheat flour, arrowroot powder or tapioca flour to thicken the sauce. If you want to add more creminess, you can add mozzarella.

Special for those looking for the easiest substitute for heavy cream there is the well-known Greek yogurt. It has a similar creamy texture and tangy flavor that works both with sweet and savory dishes.

Since cream cheese is a soft and smooth cheese with a creamy texture, it can provide the same result as heavy cream. But milk adds extra smoothness, flavor and creates a sauce-like consistency.

Your final choice can be Crème Fraîche. It’s a French cream with a thick texture and tangy-to-acidic flavor similar to sour cream. If it’s available in your local stores, you can use it to substitute heavy cream in many sauces including alfredo sauce.

Can you substitute milk for heavy cream in alfredo sauce?

Yes, you can substitute milk for heavy cream in alfredo sauce. However, the sauce will not be as thick and creamy.

If you want to thicken the sauce, you can add a bit of cornstarch to the milk before adding it to the sauce.

Also, keep in mind that using whole milk will result in a richer sauce than using skim milk. So, if you’re looking to lighten up the calories in your alfredo sauce, skim milk is the way to go.

If you want to make a low-fat alfredo sauce, you can also substitute evaporated milk for the heavy cream. Just be sure to add an extra tablespoon or two of flour to help thicken the sauce.

Alfredo sauce is a delicious, creamy pasta sauce that can be made with or without heavy cream. If you are a vegetarian or just hate saturated fat in dairy products, then you can choose pureed cauliflower to replace the heavy cream in most Alfredo recipes.

Another option is to choose cashew cream, a very common vegan alternative — to be the base of your Alfredo sauce.