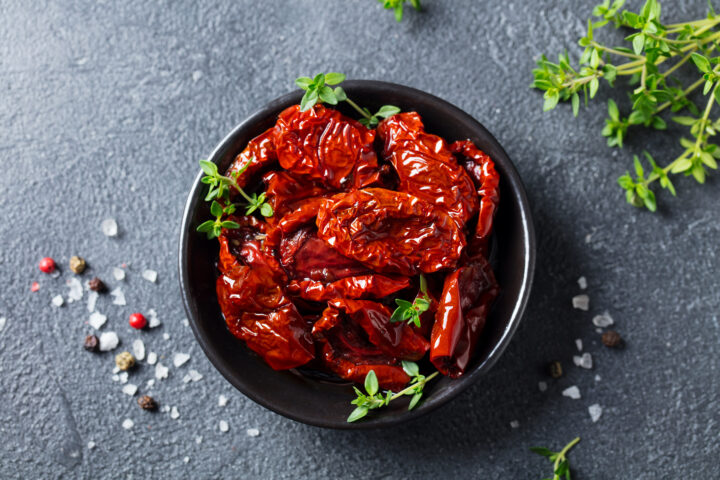 Sun-dried tomatoes are tomatoes preferably dehydrated under the direct rays of the sun. Thanks to this dehydrating technique they keep their aroma, tart acidity with some sweetness and chewy texture as well as vitamins and beneficial properties.

While it’s the best way to dehydrate tomatoes, you can also dehydrate them in the oven or dehydrator until they lose their water content and shrink up.

Of course not everyone has homemade sun dried tomatoes but you can find them at grocery or herbs stores. They are used as condiments in salads, dips, pizza sauces, pastas and many other dishes where you need the touch of tomato flavor but it’s not in season.

Besides those store-bought varieties you can also refer to substitutes for sun dried tomatoes and here we are to help you with that task.

You can buy semi-dried tomatoes from grocery stores and use them in place of sun dried tomatoes. These are tomatoes dehydrated about half way.

Compared to fully dried tomatoes they retain some moisture and therefore they have a shorter shelf life.

The next comes canned tomatoes, which are again easy to find substitutes. They are perfect, especially for sauces. You can mix drained canned tomatoes with tomato paste or tomato puree to make it thicker and more suitable for sauces.

You can use tomato puree instead of sun dried tomatoes in soups and stews. The difference is the texture and a little bit of flavor. Overall, it’s made of the same vegetable and if you use it in cooked dishes, the difference won’t be so noticeable.

Tomato powder is made of dried tomatoes that are grinded and powdered. It is sold in spice and seasoning stores or the same sections of grocery stores. You can always have it in your seasoning racks and use it in many cooked or roasted  dishes.

You can sprinkle tomato powder over roasted chicken or fish dishes, add to soups, stews, pastas, vegetables and dips. It’s a super versatile seasoning and comes with the desired tomato flavor.

Tomato paste is one of the easiest replacers for sun dried tomatoes as it’s almost always available in our fridges. It is used as a base for pasta sauces and dips.

You can use it in soups, stews, pasta sauces, pizzas or any other recipe calling for sun dried tomatoes.

There are also sun-dried tomato pastes made of the dried vegetable of tomatoes. If you find it, then it will be a better substitute in many dishes.

Tamarind paste is made of sour and dark-colored fruit of the tamarind tree and it’s a popular condiment in Asian cuisine. It has a complex taste of sweet and sour flavors mingled in tangy and tart notes.

Tomato sauce is a marinara made of tomatoes, garlic and basil but it may also contain carrots, celery, onions and additional seasonings. Compared to the previous substitutes, it comes with a different taste because of this mixture of flavors.

The consistency is thin and the taste is milder but the end dish won’t disappoint you. Moreover, additional veggies and flavors will enrich your soup or pasta sauce making it more appetizing.

Do you have bell peppers in hand? Roast them and use in place of sun dried tomatoes in appetizers, antipasto or brochettes. Compared to other peppers, bell peppers come with a sweeter flavor and when roasted, they become similar to tomatoes.

Mushrooms have the same chewy texture as sun dried tomatoes and you can use both fresh or dried mushrooms in place of dried tomatoes in soups to complete the absence of chewiness. On the other hand, mushrooms ideally go with soups, stews and broths providing them with a unique taste.

They are great especially in fall and winter seasons when we make hot dishes with dried veggies. So, you may change the flavor of your dish a little bit by replacing dried tomatoes with mushrooms. And again, this is great for people who have allergies from tomatoes.

Olives also tend to shrink up when baked and become chewy just like sun dried tomatoes. They are an excellent alternative in case you want to make the dish more interesting as well as avoid tomato allergies.

Pecans may sound somehow weird as sun dried tomato substitutes but they can be used in sauces and sometimes even salads to add a nutty flavor and chewy texture. Just like some of the previous options, pecans are good for tomato-intolerant people.

Of course, they are totally different compared to sun dried tomatoes but if you roast them in an oven and then add to the dish, you’ll get a solid flavor and slightly similar taste for your dish. Pecans are also a good option thanks to their chewy and dry texture.

If you have small fresh tomatoes in your kitchen then you can easily make your own sun dried tomatoes and store them for later use.

Of course, you can use fresh tomatoes in place of sun dried ones but since sun dried tomatoes come for help when we don’t have the fresh vegetables, it’s better to know how to make it and always have it in hand.

All you need is tomatoes and salt. Slice the tomatoes in half, place them on a tray, sprinkle some salt and place under the direct rays of the sun until they are fully dry.

If you don’t have the opportunity to dehydrate tomatoes under the sun, then put them in the oven or dehydrator.

Compared to fresh tomatoes, sun dried tomatoes offer a stronger and more intense flavor. They are packed with antioxidants and vitamins and are considered more beneficial for health.

If you store sun dried tomatoes in oil then it will have a stable shelf life. Once you open it, you need to store it in a fridge and can use it for up to six months.

Quick oven-roasted tomatoes remain the best substitutes for sun dried tomatoes but they work only in case you have fresh tomatoes. If not, then these alternatives can come for help and save your dish.

We have collected substitutes that have almost the same taste. If you are after the texture, then go ahead with other options listed above.