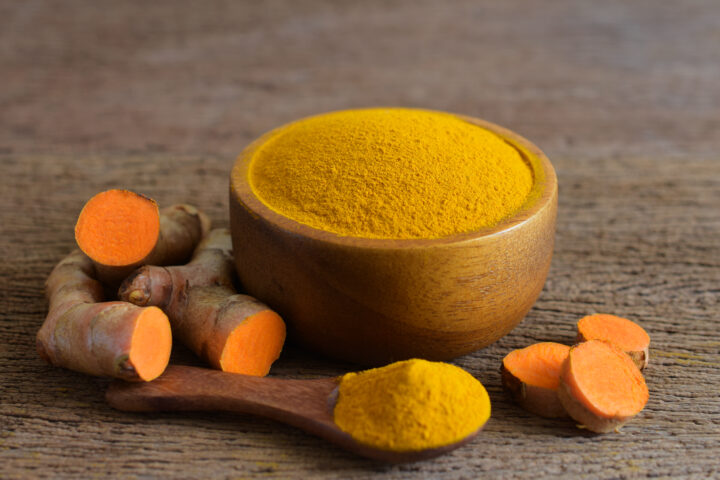 Turmeric is a spice coming from the ginger family. It is native to southern India and Indonesia and has gained popularity in many cuisines. It is used in stews, soups, curries, pickllings, vegetable and rice dishes, smoothies, juices and hot drinks.

It has a bright orange color which reflects on the dish. It is often used as a natural food dye. Turmeric has an earthy bitterness and slight peppery taste similar to ginger and mustard. It is sometimes mixed with other spices for a better taste and richer flavor.

Today we’ll discuss the best turmeric substitutes to help you prepare the dish that calls for this spice.

Due to those spices it has a stronger flavor and goes well with many savory dishes. However, it can’t be used to replace turmeric in any dish.

You can use turmeric paste in juices, smoothies, snacks, stir fries, stews and as dressings and other savory items. You may also add turmeric paste to teas and “Golden Milk”.

Saffron is one of the healthiest and useful spices derived from a flower called crocus sativus. It is native to Iran, Greece, Morocco, and India.

This spice has a sweet and floral taste with earthy notes. It has a bright orange-red color and can be used instead of turmeric to provide that bright color to your dish.

Since it doesn’t come with the exact taste of turmeric it’s better to use saffron in small amounts. If you use more, its sweetness will be noticeable.

Compared to turmeric, saffron is more expensive but if you have it in your spice racks, then it’s worth trying in many dishes.

Curry powder is an easy alternative to turmeric. It’s a blend of several spices that make it so rich in flavor and taste.

Turmeric is one of the ingredients in this mixture, therefore you can use it in dishes that call for turmeric powder. Other spices can be cumin, black pepper and ginger that enhance its flavor.

Curry powder has a yellow color, earthy taste with both sweet and spicy notes. You can use it with fried rice, seafood, meat, chicken, curries, soups, stews, sauces, marinades, vegetables and many Asian dishes.

The difference between curry powder and madras curry powder is the heat: the latter is spicier. It includes chili powder which makes it hotter. You can consider it for savory dishes and in recipes that call both for turmeric and hot spices.

Madras curry powder is often used in Indian dishes. It also has a brighter red color due to chili and will make your dish look more appetizing.

Since turmeric comes from the same family as ginger they both share similar properties and flavor. So, ginger powder can be the next turmeric powder substitute.

If you have ginger root in hand or can buy from markets, then you can make this spice yourself. Just grind the dried ginger root and use the powder instead of turmeric powder.

Annatto is an orange-red condiment, often used as food dye, made of the seeds of achiote tree. It grows in South and Central America and can be available in many American stores.

You can buy either annatto seeds or its powdered version and use in place of turmeric in savory dishes.

Although annatto comes with peppery, sweet, and nutty flavor and taste it has a bright orange-y color that will be reflected in your dish like turmeric. First, mix it with some oil and then add to the dish. This way, the color will be more prominent.

Ground cumin is the powdered version of cumin seeds. It is used with rice dishes, stews, soups, pickles, breads and barbecue sauces. Both turmeric and cumin have antimicrobial properties despite the fact that one is ror and the other one is seed.

Cumin has a nutty and spicy taste with lemony undertone. Compared to turmeric, it has a sharper flavor and you need to take care of the ratios.

Garam masala is a spice blend native to Indian cuisine. It is made of cardamom, black pepper, cinnamon, cloves, coriander and cumin. It carries some turmeric flavor and can be used instead of it in savory dishes.

It can add a rich color to the dish as well as some spiciness. Since it’s deeper in taste and flavor than turmeric, you can use half teaspoon of garam masala to substitute 1 teaspoon of turmeric. You can use it with chicken, baked vegetables, soups, stews and rice dishes.

The unique combination of smoked paprika and mace can bring a smoky, spicy flavor with sweetness and warm, woody, peppery notes.

These two spices have a rich and well-pronounced flavor as well as bright red-orangey color that make savory dishes more appealing.

Use this substitute in savory dishes to add extra-depth to the overall flavor and bring the appetizing bright color.

Galangal powder is a condiment closely related to turmeric and ginger. It is made of galangal root and is used not only in cooking but also for medical purposes.

It has a spicy, peppery and tart taste and is widely used in Thai and Asian curries, stir-fries, soups, sauces, vegetable and meat dishes including chicken, duck, pork and fish.

Galangal powder has a bright orange-y color and is considered as one of the most appropriate alternatives to turmeric both for its flavor and color.

Mustard powder, also called dry mustard, is a yellow spice with a sweet-to-spicy flavor. It is mainly used in savory dishes, salad dressings, and marinades.

Compared to turmeric, mustard powder is spicier and you may start with small quantities and then add more if necessary. The taste is not identical but quite neutral, so you can mix it with oil to bring out its taste.

Of course, it’s easier to find and use turmeric powder than turmeric root, but if you don’t have the powder in hand, then use fresh root from which you can get the spice. However, it may be a bit hard to find.

Turmeric root looks like ginger root only with a bright orange color. You need to slice the root or cut it into small pieces and add to your dish. Another way to use it is to dehydrate the thin slices of turmeric root and grind it in a blender.

In place of 1 tablespoon of turmeric powder you need to use 3 tablespoons of fresh turmeric because powdered turmeric has a stronger flavor than the fresh one. On the other hand, any fresh vegetable, herb or spice is more nutritious than its dried or powdered version.

Safflower, also known as American or Mexican saffron, looks like saffron. It has a sweet, chocolaty and tobacco flavor that ideally goes with desserts, hot drinks, teas and baked goods. It is also used in fish soups and stews.

Safflower has its special place as a food coloring due to its vibrant orange-y color that resembles turmeric. So, your dish will get the same appearance as in the case of turmeric. Safflower is considered as the cheaper version of saffron but they are different.

Turmeric has an earthy and bitter taste with slight peppery heat. It is rather warm than spicy or hot. It is mostly used for coloring more than for taste or flavor.

What can I use instead of turmeric in “Golden Milk”?

You can use turmeric paste or ginger instead of turmeric in “Golden Milk”.

What can I use instead of turmeric in pickling?

If you don’t have turmeric you can use safflower, saffron, mustard seeds and annatto to season pickling.

Can I use turmeric for weight loss?

Turmeric is included in many diet-friendly recipes especially for weight loss. Turmeric tea has its special place in weight loss plans. It’s a digestive juice and helps to emulsify fat and its metabolism. As a result, you lose weight.

In spite of the fact that turmeric is unique in its color and taste, its relative condiments can offer similar properties.

Some of the turmeric substitutes listed above can provide the same appearance to your dish and some others will bring a similar flavor.

Your choice mostly depends on the taste of the spice. You should be careful with the ratios of spices that are richer, deeper and stronger.